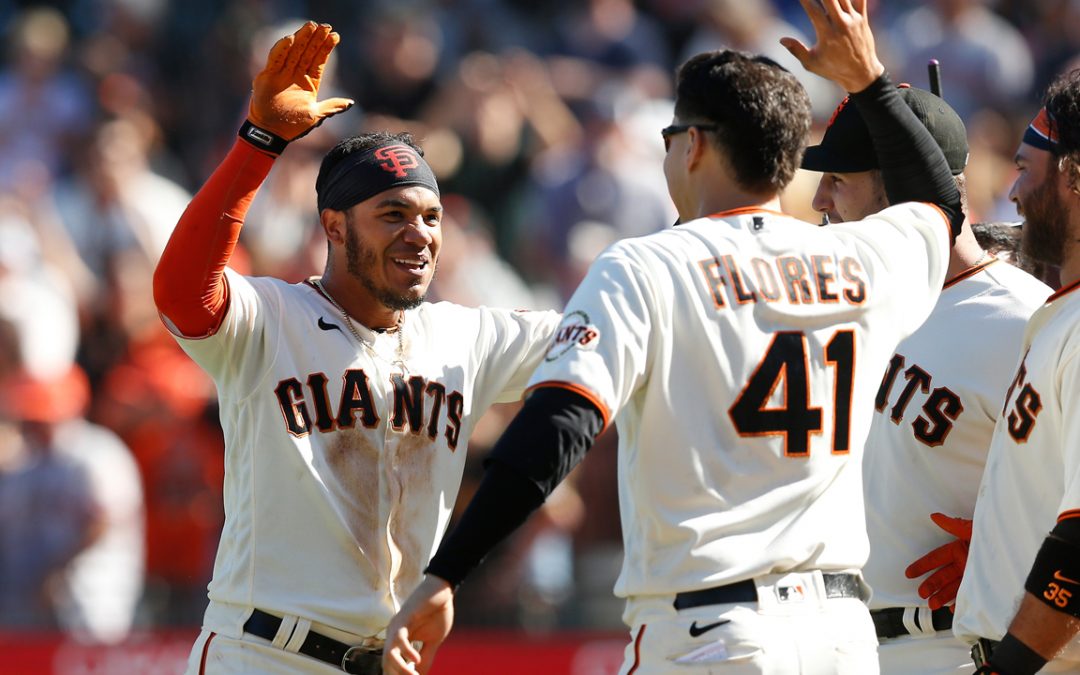 Hello TWG family! This is something I put together to get us through the early part of the offseason. Thanks to the approval of our own Greek Giant, I am doing a series of guest posts reviewing the Giants’ 2022 season. While it would be great to review every one of their 81 wins, I decided to choose/narrow down the highlights that I deemed noteworthy with some individual accomplishments mixed in. Most of the wins will be listed, just not all of them. Unfortunately, there will be some games where the Giants lost, but that shouldn’t take away from a milestone that was achieved by a Giants player. I will be doing monthly highlights starting with April and a new month will post every Wednesday. Of note, September/October will be posted together. I hope you will enjoy these highlights as much as I had fun putting it together. Here are the April 2022 highlights:

8 April: For the first time since 2009, the Giants open the regular season at home with a thrilling 6-5 win in 10 innings. Thairo Estrada hit a solo HR in the bottom of the ninth to tie it, and Austin Slater doubled down the left field line to score Darin Ruf all the way from first base. “RUF IS ON THE MOVE!!!!”

9 April: Despite the Giants losing 2-1, new LHP Carlos Rodon had 12 strikeouts in five innings pitched in his Giants debut.

10 April: 2017 1st Round pick Heliot Ramos made his big-league debut after being called up from Triple A Sacramento. He went 2-for-3 while batting sixth in the Giants’ 3-2 win.

12 April: Alyssa Nakken made “herstory” tonight by becoming the first woman to appear on-field in a regular season MLB game, taking over first base coaching duties after original coach Antoan Richardson was ejected. RHP Alex Cobb also made his Giants’ debut, striking out 10 in 5 innings in a 13-2 Giants win over San Diego.

17 April: 35 degrees at first pitch in Cleveland makes this the Giants’ coldest game since at least 1990 (no reliable data available prior to that). Giants win 8-1. It was also the first time in the last 16 meetings between SF and Cleveland that either team has scored more than five runs. It was the longest active streak of its kind in the majors. The Giants also set a franchise record with nine straight games to start the season in which the starting pitchers allowed 2 or fewer runs.

20 April: Brandon Belt celebrated his 34th birthday by crushing a homerun into the second deck of a 5-2 win in New York. He was previously 0-for-18 on his birthdays.

22 April: Luis Gonzalez, making his Giants’ debut as a pinch-hitter in the 7th inning of the Giants’ 7-1 win, became the 1,000th player to appear in a game in San Francisco franchise history.

25 April: Gonzalez, who made his Giants debut three days prior, hit his first major-league HR; a 2-run shot that stayed just fair around the right-field foul pole in the top of the 9th inning to give the Giants a 4-2 win at Milwaukee to complete an 8-3 road trip; their best winning percentage on a 10+ game road trip since 1994.

26 April: With nine strikeouts in an 8-2 win over Oakland, Carlos Rodon set a Giants franchise record for strikeouts through the first four starts of the season (38), passing Tim Lincecum (35) in 2009 and Christy Mathewson (34) in 1908. Of note: in each of his four starts in 2022, Rodon has struck out 8 or more, allowed no more than 3 hits and allowed no more than 1 run.

29 April: After 11 years and 1,132 games in the minors, Jason Krizan made his long-awaited Major League debut with the Giants. He started in left field and went 0-for-3 in a 14-4 loss to Washington.

30 April: Jason Vosler recorded the Giants’ 92nd Splash Homerun and 145th overall since the China Basin ballpark opened in 2000. It was Vosler’s 2nd HR of the season, his first splash homerun, and the first splash HR of its kind in 2022. Giants won 9-3 over Washington.

Again, these are the games to me, that stood out. As I counted, there are 11 games listed with nine of them wins. The Giants played 21 games in April. Some of you will probably say, “Well what about this game?”, or “You forgot to mention this game.” I get it. If there isn’t a game that I did not mention, feel free to add in the comments below if it stood out to you, or you were at that game. I’m looking forward to posting the May highlights next week. Stay safe. Stay Giant!