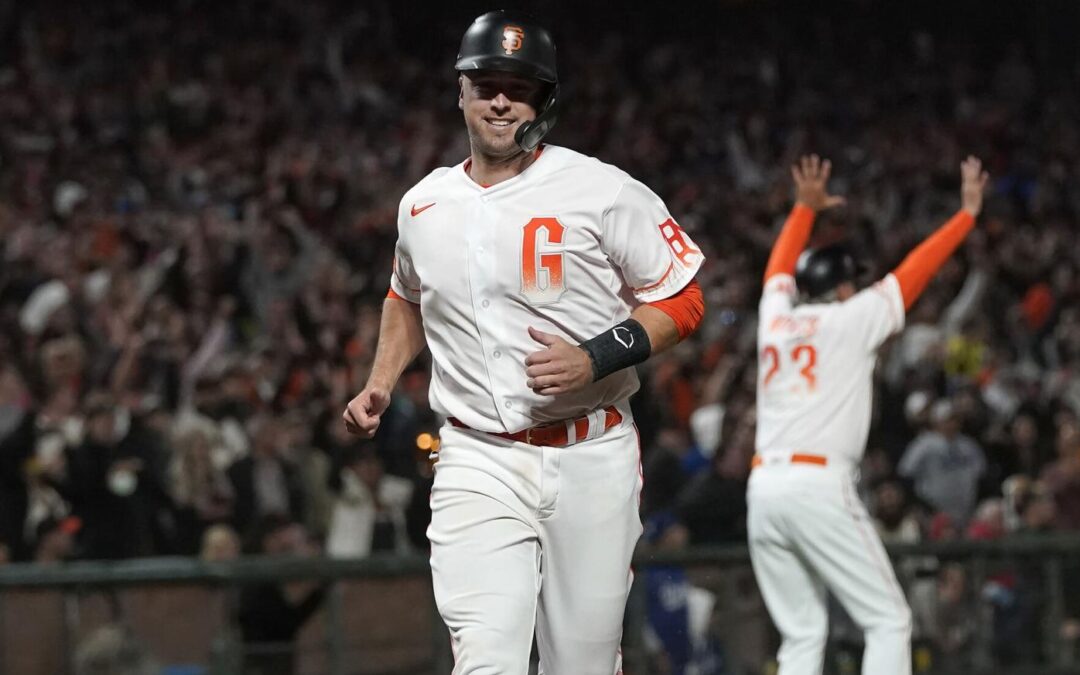 For the second straight game against their rivals in Hollywood, the Giants won a game thanks to sloppy Los Angeles defense. In last night’s gritty 2-1 victory, Cody Bellinger overthrew Justin Turner by about 34 feet in an attempt to throw out Buster Posey who took a wide turn around turn on a play that was started thanks to some heady base-running by Mike “The Natural” Yastrzemski. Yaz stopped abruptly on a slow ground ball to second baseman Max Muncy by Darrin Ruf. When Muncie advanced in the base path to field the slow roller Yaz, who was on first base, was able to slam on the breaks, avoid the tag, and make Muncy throw to first base to get the first out of what should have been a double play. Bellinger then airmailed his throw to third rather than get the easy out at second base to complete the double play. It was both a mental and physical error by the 2019 MVP winner and it was the decisive play of the game.

Buster also had the quote of the night: “With my speed I figured I had a chance to score.” regarding his big aggressive turn around third that drew Bellinger’s throw.

The inning started with walks to Posey and Yaz by Dodger reliever Blake Treinen. Walks will kill in a tight game.

Giant starter Logan Webb pitched six strong innings allowing a lone run in the top of the fifth. Dodger starter Julio Urias was very good as well and we had ourselves, after four innings, a classic pitcher’s duel where every pitch counted and every play could turn the game.

Jake McGee pitched the ninth for his 21st save. Don’t look now but the lefty is putting together a solid run of work after a few early season hiccups. It was reported that McGee threw nothing but fastballs in his outing.

The Dodgers threatened with runners on second and third and one out in the top of the 8th inning but Tyler Rogers was able to work out of the jam. He also earned the win to go 2-1 on the season and lower his ERA to 1.91.

Buster and Austin Slater each had two hits and scored a run.

The home crowd was loud and proud on this Tuesday night when the Giants were once again wearing those horrid creamsicle and white jerseys that give the team the look of a girls high school softball team. Maybe the jerseys are so bad that they represent a major mental distraction to the opposition.

The San Franciscans are now 4-0 in those unis. God Bless the creamsicles!

The attendance was announced at over 43,000 and the game lasted a remarkably swift 2 hours and 39 minutes according to my calculations. Not bad for a Tuesday night in a pennant race.

The 63 wins are at the 100 game mark are the third most in the San Francisco era for the Giants. Not too shabby

Giants in the News

There are reports that Giants are talking with the Cubs on acquiring Kris Bryant.  I do not know if I believe it. Bryant to the Giants does not make much sense for a variety of reasons.