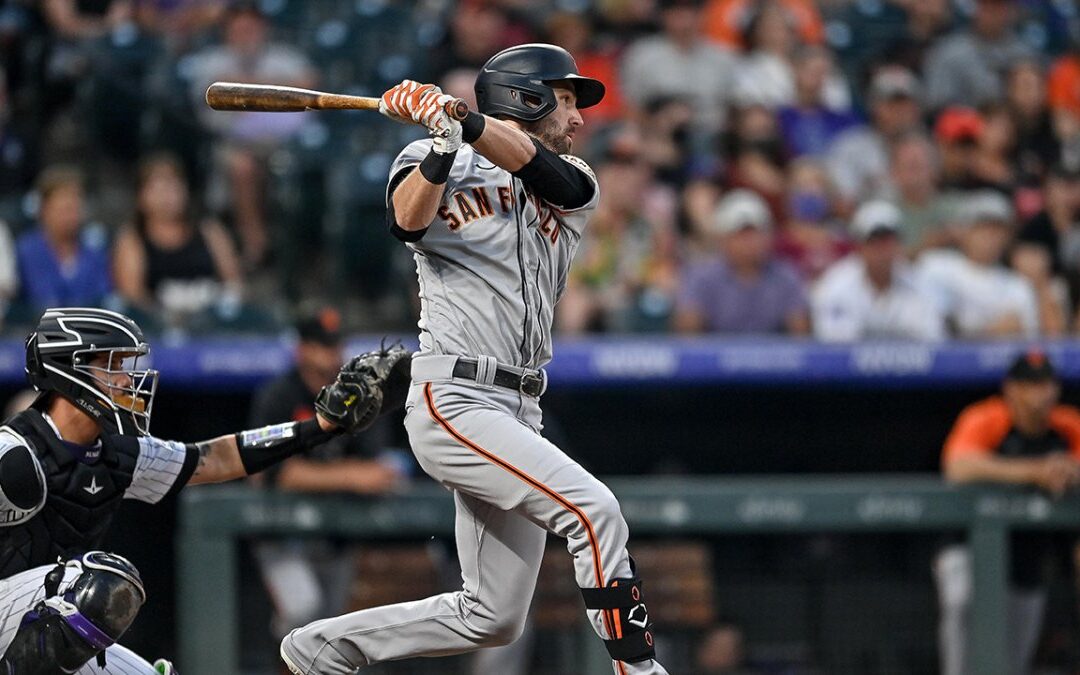 The first three batters of the game, La Stella, Belt and Posey, all doubled and would score. That’s the way to start a game on the road. In their 12-3 ho-hum win last night at Denver Park, the Giants would put up three in the first, two in the second, three in the fifth and three seventh before adding a lone run exclamation point in the ninth. The consistent production, twelve runs on fifteen hits was the story of a game in which the Rockies never threatened and Colorado starter Chi Chi Gonzalez was basically shell-shocked by the time he was pulled with one out in the top of the second inning.

With the Giant bats exploding in Denver the only question is the toll a series will take on the pitching staff. The answer: so far so good. Last night Logan Webb pitched seven strong innings and allowed three runs, the same as Kevin Gausman the day before. These starts, as I already noted in my previous post, are the equivalent of going eight or nine and allowing two or fewer in other ballparks. They are HUUUUUGE.

Yesterday Webb was again mostly dominant pitching with a three run lead before toeing the rubber. He did allow nine hits but zero walks in striking out six. After the game Webb would note the importance of not walking anyone to avoid big innings.

It sounds simple enough but the truth is for a pitcher that means you have to come in and challenge each and every hitter. Against the Rockies of old with LeMahieu, Arenado, and Tulowitzki in the line up, that is not always a sound strategy. This new version of the Rockies line up is Colorado lite and tastes just great with less filling for Giant pitchers.

Steven Duggar had himself a day and is basically on fire since being called up for Sunday’s game. Yesterday he hit two triples and three hits in five at bats with three runs batted in while raising his batting average to .277. A shot in the arm for a previously struggling Giant line up indeed.

Bcraw had three hits to raise his batting average to .294 and earn, perhaps, a few more MVP votes along the way.

Yas, yes, Mr. Mike Y hit a home run and had another hit as well to get his average a bit higher than his weight at .223.

Yaz makes it a 10-run cushion for the @SFGiants! pic.twitter.com/a82T2z0kUx

Basically, yesterday was a fun day for our boys at the plate.

The last two innings of the game for the Giants were pitched by Kervin Castro who was making his Major League debut. Before he threw his first pitch he stuck his hand out to shake Buster’s hand. Buster responded with a tap on the chest to encourage him and dust off the butterflies. The result was two shutout innings with VERY impressive stuff. With Doval Castro could end up being part of a very powerful 1-2 punch in the Giant bullpen sooner rather than later. It is interesting that the Giants waited this long for Castro to make his debut, as if he is a secret weapon and Farhan Zaidi does not want the League to get a look at him before the postseason. The win makes the Giant record 89-50 with 23 games to play. Since the team in Southern California won as well the Giants lead is still one game. With 23 left I figure the Giants need to go 14-9 to win the West. If they do, the Hollywood team would need to go 16-7, not impossible but not likely, particularly because they keep winning at a ridiculous pace. It seems the only team that can beat the Bums these days is the Giants. Too bad we don’t have any more games left against them.

Alex Wood has finally turned the corner in his battle with Covid according to Manager Gabe Kapler. He is reported as feeling much better and starting his recovery, which is expected to take at least another week since he is still a bit weak and not yet ready to pick up a baseball. This is good news! I think Mr. Wood is going to be a key figure as the number 4 starter in the final two weeks of the season. With Wood still out however there are questions surrounding how the Giants will line up their rotation for the next six games (three at Wrigley and three at home against the Braves).

Tonight the Giants go for a sweep and it will be Anthony Desclafani facing Jon Gray. This will be Gray’s first start since August 29. He was sidelined with forearm issues on his pitching arm. Gray is one of the more curious stories of the past five or six years. When he broke into the Bigs he looked like a superstar in the making. It has not worked out that way. First pitch is at 1:10 pm Larry Walker time.