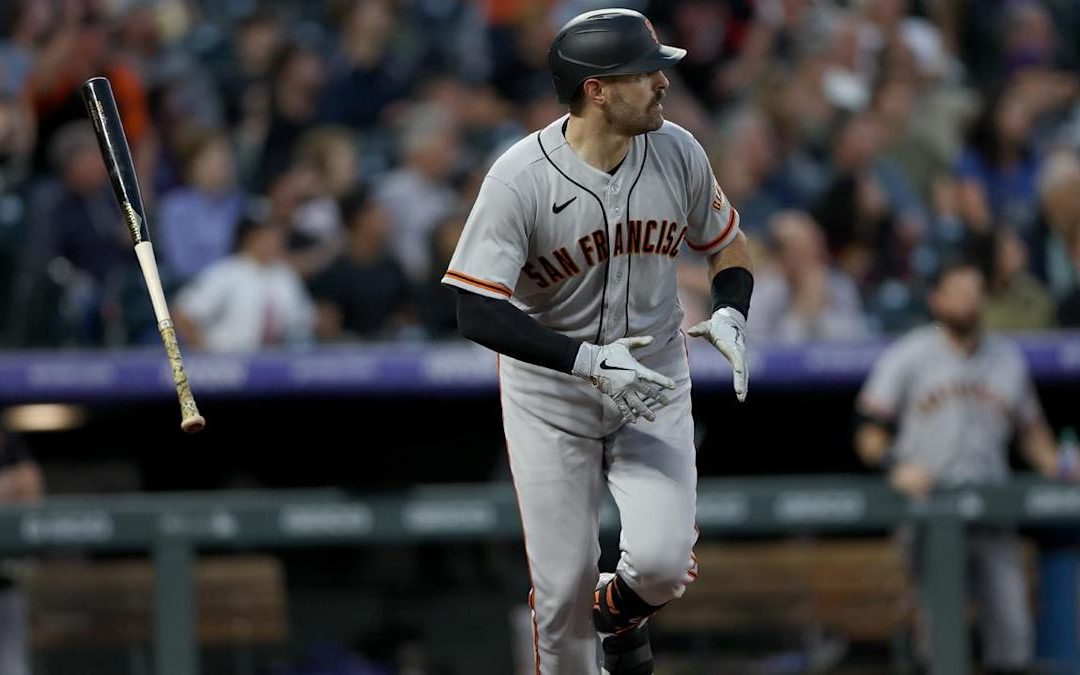 The Giants won their eleventh straight game against the Rockies last night in thrilling fashion. The 7-6 victory came thanks to a mammoth home run deep into the second deck in right field in the top of the ninth off the bat of Mike Yastrzemski. The ball was hit so far and so deep that it got lost under the bleachers of the third deck disappearing deep into the Colorado night where few Rockies fans dare to tread.

The game-winner came off a low and inside fastball, one of Yaz’s hot zones.

It was Yaz’s third homer of the season.

One of the central stories of the game is Curt Casali and his two, loooooong, deep and sexy home runs, both of which came off the hand of Ty Blach. The first was a solo bomb off a swervy lervy breaker on the outside corner that Casali patiently (one Mississippi, two Mississippi..) timed and destroyed. It was on a first class ticket to Tokyo on its way over the left center field bleachers.

The second came with two runners on in a key moment of the game (tied 1-1). The pitch from Blach was an inside fastball that the big lefty and former Giant tried to sneak by Casali. Curt pulverized it deep into the left field bleachers.

The Rockies would answer with two runs in the bottom of the fifth immediately after Casali’s three-run bomb. The second run came in courtesy of Charlie Blackmon who laced a double to left field to drive in a Rockie. That was a critical play in the game as the ball appeared headed for the gap with Yaz racing to track it down just before it got by him. In one motion the center fielder twirled and made an accurate throw to Brandon Crawford, the cutoff man who was waiting in short left center. That throw prevented Blackmon from scoring. It was a fantastic display of athleticism and solid outfield defense. Yaz knew he had no chance of getting Blackmon at second so he made the smart play. Never mind that Blackmon would later score on a single. It was still superb defense and an example of solid baseball fundamentals.

Alex Wood pitched into the fifth going 4 1/3 innings allowing three runs on six hits. He was good enough. As Mike Krukow says: “Any starting pitcher who allows three runs or less in Denver gets a quality start.” I agree with him.

Dominic Leone surrendered two runs but John Brebbia pitched a shutout inning for the win. He did so in impressive fashion, striking out the side in the bottom of the eighth inning to set up Yaz’s heroics.

Camilo Doval earned the save, his sixth of the season, with a shutout bottom of the ninth.

Coming off two bad, ugly losses in St. Louis, the Giants came up big against a tough divisional foe. The win puts the San Francisco record at 21-14, 1.5 games behind the Bums.

Let’s talk some more about Curt Casali. The Giants backup catcher is noted, and rightly so, for his defensive skills, particularly for receiving the ball and calling a solid ballgame. With Joey Bart struggling offensively, any offensive output from Casali is a bonus. When he does a Buster Posey impression and slugs his way to a Giants win, well then, let’s pop some bubbly.

Tommy LaStella returned from the IL and played his first game of the season as DH. He had one at bat before being lifted for a pinch-hitter, Darrin Ruff. Talk about anti-climactic. I do not understand that move but Ruff did get two hits and score two runs in the game.

Alex Cobb will face Chad Kuhl in game two of the series in Denver. First pitch will be at 7:40 PM, Rocky time.