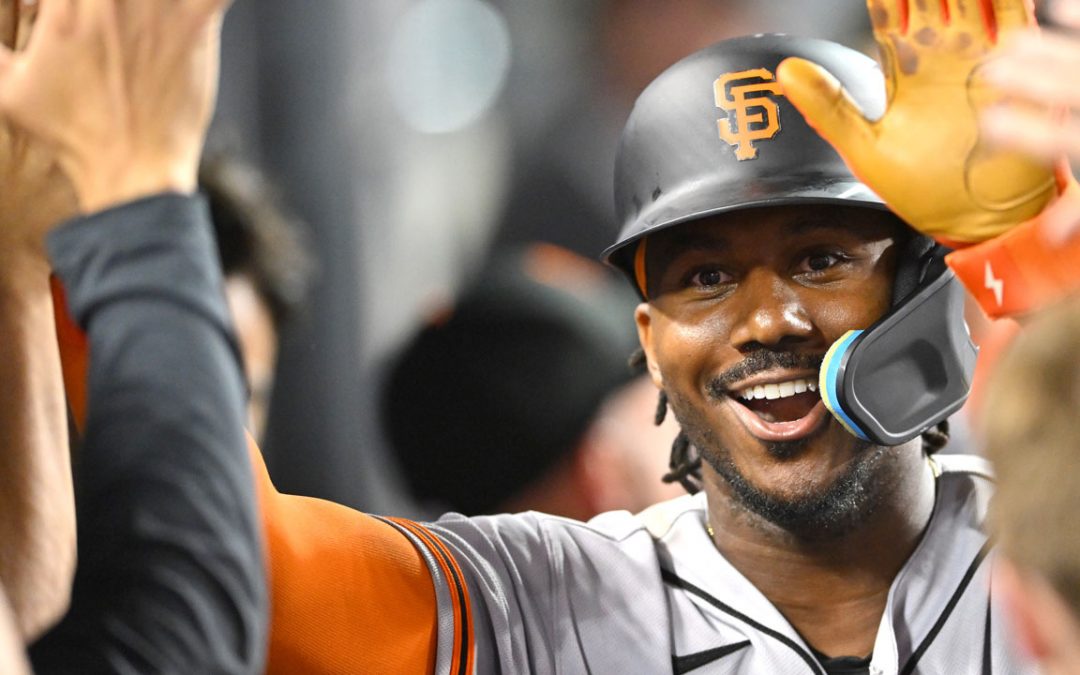 “It’s fun when you win, especially here in LA. As a team, it just feels like we’re gelling.”

Going into last night’s game the Giants had lost eight in a row to the Bums and nine in a row in Los Angeles. Of all the ugliness this season I would say those marks are the lowlights in 2022. Last night the Giants broke those streaks thanks to five home runs, all more or less to center and to right. The Giants attacked Andrew Heaney the best way you can when a lefty junk-baller tries to do his best Tom Glavine impersonation and pitch away, away, away to righties.

Logan Webb went six innings allowing only two earned runs and striking out six. He allowed seven hits and walked none to get his twelfth win of the season. Coming into the game Webb was 0-3 in his last four starts with an ERA of 1.58. You can’t make this stuff up. That’s how bad the Giants have been lately.

When Freddie Freeman went deep in the bottom of the first we all thought the same thing: “Here we go again.” Well, there we did not go because despite an unearned run Webb settled down to pitch very well. The Giants needed this from him. So did I.

Marte and Alexander pitched the seventh and eighth innings respectively with Marte going 1 1/3 innings and Alexander yielding a run. Camilo Doval earned his 20th save with a scoreless ninth inning. Dodger Losing Streak OVER!

The Giants have now won four in a row.

Let’s take a look at those beautiful home runs.

The first Brinson homer and the Davis Blast:

Now let’s evaluate the Brinson smash like the fine piece of art it is: First, Brinson does not get all of it. He hit it a bit low on the barrel. Second, the ball is out over the plate and Brinson is a bit early, he inside-outs it a bit. Lastly, the kid has some serious power. That home rune went 430 feet if it went an inch, never mind what the official stat says. Imagine if Brinson hit it all? We’re talking out of Dodger Stadium power, ladies and gents.

Poor Andrew Heaney. He never knew what hit him. After Davis’s home run he was talking to himself. The Brinson homer tied the game at two after the Giants fell behind early, 2-0. The Davis dinger put the Giants ahead for good.

Thairo does it again:

The Giants power up the middle and the other way was an example of a team making adjustments and having a plan of attack against a good left-handed pitcher. Neither homer came off a mistake pitch necessarily. Bravo Boys.

Who Is Lewis Brinson?

Could Lewis Brinson be another major “HOPE” diamond in the rough? I’m talking MVP like stuff? Well it is a bit early but Brinson was a first-round draft pick at 29th, courtesy of the Rangers. He is now 28 and has had a very unspectacular career with issues batting over .200 and combining that with a low power output. After five seasons with the Marlins and his best slugging percentage of .376, it is easy to see why Miami let him walk. Brinson was part of the Marlins haul in that huge trade with the Brewers after the Rangers had traded him to Milwaukee. He then ended up in Houston and then landed with the Giants in the September 1 trade this year. It says he was traded for “an undisclosed return” which basically means the Astros gave up on him. We will see what he can do for the Giants in the final 29 games of the season. I want him and J. D. Davis to play every day. Same for Villar. No more platooning, Kapler!

Game two of the series in Socal is tonight at 7:10 PM. The Giants have not announced a starter. The Bums will pitch Tyler Anderson, another lefty. The Dodgers have pitching issues.