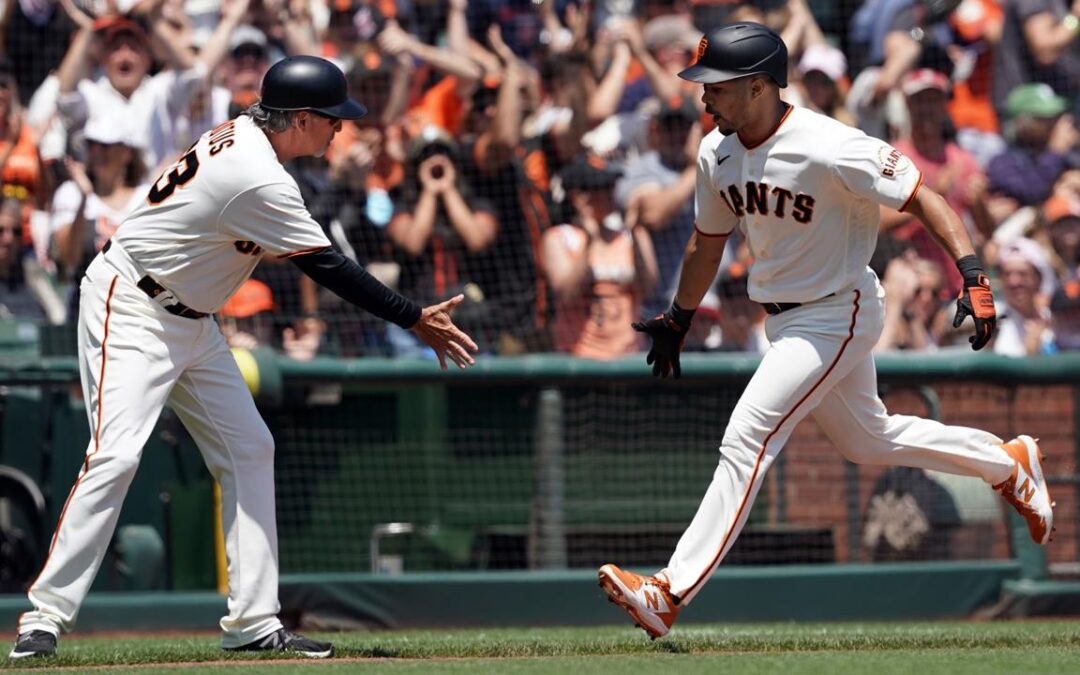 Let’s get this straight: It would have been a disaster if the Giants had been swept in San Francisco by the Pirates on the heels of a 3 out of 4 series win in LA. Thanks to yesterda’s 6-1 win over the Pirates the Giants were able to avert the aforementioned disaster. I think it is safe to say the Giants would suffer an emotional letdown after the Dodger series in Los Angeles earlier in the week. So, yes, Friday was a stinker. Saturday was a big disappointment. What is wrong with Kevin Gausman?

In yesterday’s very important win, the Giants went deep four times with long balls from Wilmer Flores, Thairo Estrada and two from LaMonte Wade Jr. Alex Wood was once again the stopper, going 5 1/3 innings in a winning effort and allowing only a lone run to a Pirates team that was taking it to the Giants this season. Wood would strike out eight and get his 9th win of the year.

The story of the game may be the two home runs of LaMonte Wade Jr. who was playing  in the outfield again after filling in for Brandon Belt at first with a variety of mixed results and adventures in the field. It seems Wade Jr. was on the radar of Gabe Kapler since Spring Training:

“These are the swings that we’ve seen all year. Thinking back to spring training, we saw the on-base coming, we saw the selectiveness, we saw the aggressiveness in (the) zone. I just don’t know that we saw as consistent of an A swing as we’re seeing now. You’re seeing him get that really good explosive, athletic swing off several times in each at-bat.”
-Gabe Kapler (courtesy of ESPN)

Mr. Wade Jr. has been one of the big stories of the year so far. His two home runs in the game give him 12 for the year. He may be this season’s Mike Yastrzemski.

The curse of the Brian Reynolds trade! Ahhhh!

Do not attempt to pitch Wilmer Flores inside:

With the trade deadline only five days away I want to take a moment to return to Dr. Lefty’s fine piece from Saturday. Count me in as one person who thinks the Giants should do nothing at the trade deadline. As the good doctor mentions the Giants are in first place with the best record in baseball with all kinds of injuries to key players. No need to mention them. We know who they are. When those players come back expect the Giants to play even better. If our boys can tread water until then and remain in first place by some miracle, then my oh my we have something beautiful happening here. Though I believe it is a buyer’s markets with so many teams tanking..eh I mean “rebuilding” there is no need for the Giants to lose quality in their Minor League system and risk a bad trade happening in three years. I think Farhan Zaidi knows most asking prices will be too high for pieces that might help the giants (think Kimbrel) so therefore he will stand pat, as he should.

This is just great. Welcome Back Duane Kuiper!