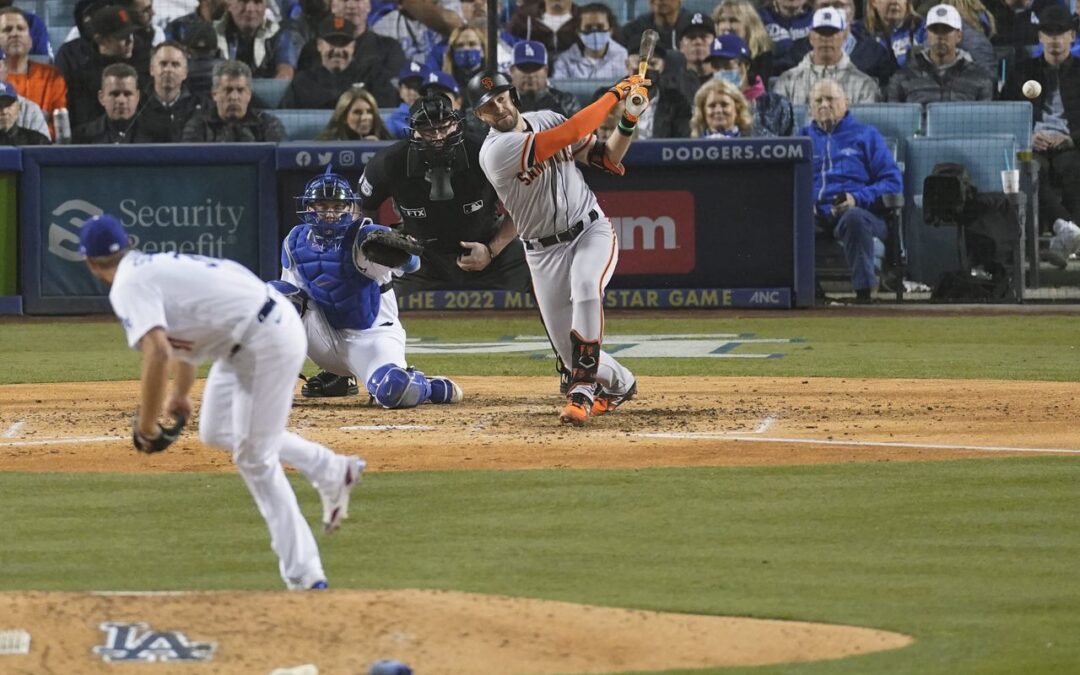 This was a game so tense and so exciting that every pitch, every swing felt like high drama. Coming into Game 3 of the 2021 NLDS at Dodger Stadium the hometown baseballers had won 16 straight. Max Scherzer had yet to lose a game for his new team. The odds were against the Giants winning the crucial swing game to take a series lead. But then Evan Longoria and Alex Wood happened.

The wind was swirling like the old days at Candlestick. The temperatures were in the low 50’s. So much for Southern California weather. So good for the Giants who felt like they were playing at Willie Mays Field. These conditions made it extremely difficult for hitters to drive balls and even keep their eyes open. Several times you could see batters call time out to adjust or clean their eyes and look for the moisture in those tear ducts. Several times pitchers had to lick their fingers, swipe their foreheads and put their digits in places in search of ways to grip the slick and dry baseballs. The winds and the cool air made for a classic pitcher’s duel decided by one swing of the bat.

Evan Longoria finally broke out of his slump to launch a baseball through the vortex of Dodger Stadium and into the left field seats in majestic fashion. It was beautiful. It was, as Brian Anderson said, “a man’s home run.” It was the kind of hit Longoria is in the line up for and last night he justified the faith show in him by Giants Manager Gabe Kapler.

The homer came on an 0-2 fastball belt- high after the Giant third baseman fouled off several pitches to stay alive in the count and in a game that saw Bum Starter Max Scherzer turn the Giant hitters into gummy bears. It was pummeled. It was a ball that was hit through the cyclone on the night many fly balls that would have been homers on a normal day ended up in outfield gloves.

The Giants tallied three hits for the whole game and had zero offensive rallies. In fact the word rally needs to be re-defined to “getting a man on base.” The Giants had four base runners the entire game thanks to a walk as well. But the Giant pitchers did not allow a run.

Alex Wood stood tall on a night that could swing the best of five series. He matched Max Scherzer with zeroes of his own through 4 2/3 innings of mostly superb work. Apart from a couple walks and a few laser beams hit at Giant defenders (I will get to that in a minute), Wood came through again. This was the fourteenth time this season Alex Wood pitched following a Giants loss. The Giants have now won thirteen of those games, an astounding feat and a testament to the big lefty’s mettle as a stopper and his veteran leadership. Those numbers are no accident. When your starting pitcher takes the mound after your team has lost, the game’s level of importance rises a few numbers on the BIG GAME scale.

The Giants played sensational defense on a night when every pitch could have decided the game. Brandon Crawford snared a bullet off the bat of Mookie Betts that appeared destined to tie the game in the bottom of the seventh and with Jake McGee on the mound when the Dodgers had runners on first and second with two outs. If that ball goes into left a run is in and runners are on first and third. Instead Brandon (MVP) Crawford leaped straight into the California stars and with full extension grabbed the liner to end the inning and save Giants fans from heartbreak. It would be the best threat the Bums would muster all night and it would come with Tyler Rogers on the mound in relief of Alex Wood.

Submit it to Cannes pic.twitter.com/uHKaDI4ikZ

Donovan Solano, Steven Duggar and Evan Longoria would also make very good to great plays on the field to preserve a lead that was so thin you could see it wafting away in the wind like a Dodger Stadium hot dog wrapper at any second.

Mr. Rogers had a night to remember going 1 2/3 innings and allowing three hits but no walks. He was less than dominant against the mashing LA hitters but he escaped with a zero in his line thanks to smoke, wind, mirrors and great Giant glove work. Gabe Kapler rolled the dice by letting Rogers pitch more than an inning and he got away with it. The Giant Manager would then call on Jake McGee who pitched two thirds of scoreless ball before bringing in Camilo Doval to start the bottom of the 8th. At the time I though the move was to face the 2-3-4 hitters (Turner, Seager, Turner) in the Los Angeles line up. I expected a matchup in the ninth or perhaps Dominic Leone. I was wrong.

A Legend Is Born

Doval retired all six batters he faced and pitched two innings of mesmerizing baseball with the only drama coming off the bat of Gavin Lux(showboater extraordinaire) to end the game with two outs in the bottom of the ninth. The at bat was why the Bums are so easy to detest, so loathe-some and so embarrassing: Mr. Lux hit a fly ball to left center and proceeded to raise his hand in celebration before even leaving the batter’s box, thinking he got it all and tied the game. But NO! That ball would land harmlessly in the glove of one Steven Duggar at the warning track. Game over.

Camilo Doval’s performance is now the stuff of legends. Consider the big righty hitting 101 on the gun with a fastball in the 8th that looked un-hittable. But heat alone is not enough to succeed in the big leagues. Just ask Hunter Strickland. Camilo is special because at such a young age he is showing determination and poise in the most critical situations. He is able to get his slider over for strikes and fool hitters who sit on the fastball. Just ask Justin Turner. His excellent two pitches combined with the divine stewardship of Buster Posey made for an unbeatable combination on this night.

Doval is exhibit A of the Giants ability to coach players up to their maximum potential. Pitching coach Andrew Bailey and his team have done a remarkable job overall this season and Doval is one fine example of nurturing along a talent and accelerating his development to a mesmerising degree. Of course Mr. Doval deserves all the credit in the world as well. After making his Big League Debut in Miami (at a game I attended) he looked promising but raw. He had difficulty throwing strikes and he was sent down to Sacramento and promoted on so many occasions that he probably never unpacked his suitcase. But since September, he has been the Giants most dominant weapon out of the bullpen and perhaps the biggest reason why Farhan Zaidi never made a trade for a reliever at the deadline.

The Giants have now shut out the Bums twice in three games, an amazing feat and a big story line this postseason that brings back memories of superb pitching performances of 2010. Game 4 takes place tonight at 6:07 PM. The Giants will try to close out the series and advance to the National League Championship Series. Anthony Desclafani will face Tony Gonsolin.