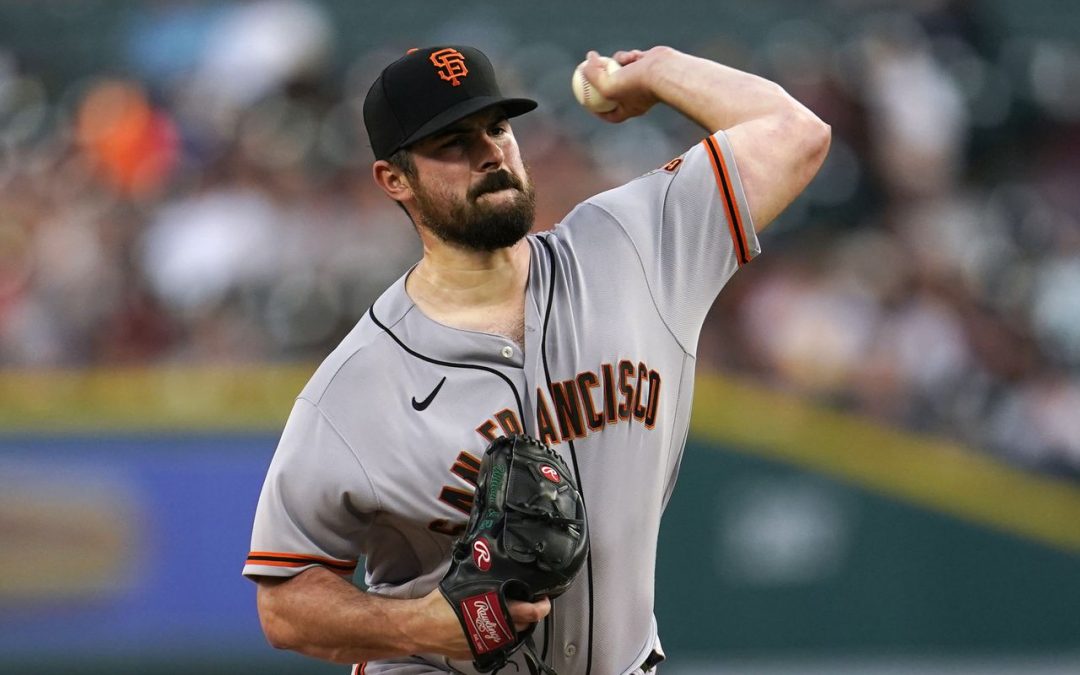 Once Camilo Doval retired the final out to pick up the save in last night’s 3-1 win over Detroit Dave Fleming said he could “flash that big ol’ smile.” Well, nobody was smiling in that nervy ninth that saw the Tigers load the bases when after Greene grounded out to short, Reyes doubled and Baez reached on an infield single. Haase walked and the Tigers had the bases loaded with Miguel Cabrera up and the score 3-1 Giants. It felt a bit like a rematch with the ghost of Sergio Romo. In this case Romo’s ghost throws 101 MPH and he would get Cabrera to k on a slider on the black with a 3-2 count that paralyzed the Tiger righty who is definitely headed to the Hall of Fame. It was eerily similar to the strikeout that ended the 2012 World Series and saw the Giants celebrate on a cold October night.

On this night the Giants were hoping to reach .500 again and they did. They are now 61-61 and 5.5 games behind the final Wild Card. We can all dream.

Camilo Doval would earn the save by inducing a ground out to first and the nervy ninth was over.

The Giants scored their first run on a line drive single to right by Joc Pederson that came off a high fastball. There were two outs at the time and it gave the Giants that all-important first run in a game where runs were scarce.

The bigger blow was Evan Longoria’s rocket to the left field bleachers. It was a beautiful laser beam what may have approached the sound barrier and came off a picture-perfect swing on a fastball down and in. Longoria is perhaps the Giants hottest hitter. The homer took place with Mike Yaz on first who reached base via a walk.

What happened to Longo? Is he back for good? Well, let’s say that his story is one of injuries and rest. This might be the healthiest he has been since last season. Manager Gabe Kapler explains the team’s philosophy when it comes to their third baseman, who apparently still has quite a few homers and great plays in him:

“(Longoria) is swinging the bat really well right now, and we owe it to him to make sure we keep him in a position to do that. We have to listen to the signals he’s getting from his body and make sure he’s getting enough rest.”

The Tigers got their run on a bloop single by Javy Baez to center that fell between Crawford and Slater, a stolen base by Baez and another bloop single to right. That was the only damage the Tigers would do against Carlos Rodon. Rodon would go seven innings and allow five hits while striking out ten and walking NONE. The Tigers did not have a runner past first base until the sixth inning.

He threw 92 pitches in the game and could easily have pitched the eighth inning. But since John Brebbia handled that job we will not second-guess Manager Gabe Kapler. Rodon was fantastic, particularly with the fastball-slider combo. He located the slider down and in and away in the same at bat while blowing hitters away with 97 MPH heaters up and out of the zone. The win was his 12th against six losses. Carlos the Magnificent is officially having a great season in the Greek Giant book of pitching.

No. 1⃣8⃣6⃣ and counting@Carlos_Rodon55 has a new career-high for strikeouts in a single season 🔥 pic.twitter.com/MWHF51IALO

Rodon’s Future as a Giant

Farhan Zaidi has an interesting decision to make at the end of the year: Let Carlos walk in exchange for a draft pick or sign him to a long-term contract that may be an over-pay to keep him in a Giants uniform. This decision may not come down to Zaidi solely but it will be a big statement on how the Giants, as a franchise, plan to operate. If they fail to sign their star pitcher, who has an opt-out after this season and can chase big free agent money, it will be further confirmation that Giants ownership has ordered Zaidi to pinch pennies on the payroll, despite what the PR department and Larry Baer say. Another scenario may be that even if Zaidi has the green light to spend big on the right players, he simply is stuck with a risk-averse philosophy that prevents him from paying top dollar on players and seeing wasted dollars for contracts when said players suffer down seasons. Either way it is a risk but being completely risk-averse is no way to win a World Series. If the Giants don’t overspend for Barry Zito there is no ring in 2012.

The Giants and Tigers complete their two-game series with an afternoon contest that begins at 1pm. The pitching matchup is Logan Webb versus Matt Manning.