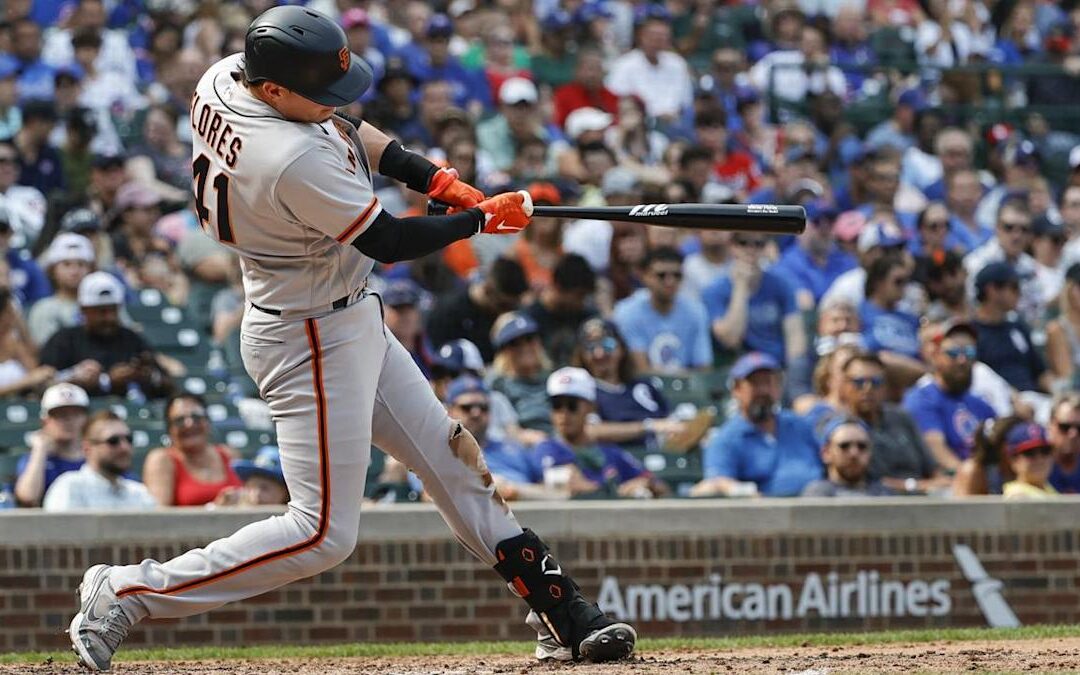 Wilmer Flores had a day in yesterday’s 6-5 win over the Cubs in Chicago in a game that was much more nerve-wracking than it needed to be. Flower Power flew across the country to play his first game since coming off the IL with a hamstring issue. The Giants wanted him in the series finale against the Cubs since a left hander was starting for the Chicago North Siders. Flores hit a two-run home run on an inside fastball and drove in a run with a single while going 3-3 in the game.

Mr. Flower Power can hit folks. He looked comfortable in the box while taking close pitches. His swing was downright fierce. You would never know he was out of commission for so many games.

The Cubs pitchers trying to work Flores inside never got the scouting report that Flores is one of the best power hitters against fastballs in and up in the zone. His ability to turn on the heat and drive it over left field fences makes for entertaining viewing.

The homer came on an 0-2 count with two outs and a runner on third in the top of the fifth after the Cubs scored a run to make the ballgame interesting in the fourth.

The Chicagoans would not go away and fought hard to make the ballgame much closer than it needed to be since the Giants had 17 at bats with runners in scoring position with four hits. Overall the Giants had twelve hits in the game and should have put the contest away in the second or third innings.

Kris Bryant scored two runs and had two hits with a stolen base. One of his hits was a single in which he advanced to second easily because of a slight mis-play by Cubs left fielder Rivas. Bryant ran hard out of the box and saw the play unfold as he was rounding first. Since he was in fifth gear he coasted alertly to second. It was a little example of excellent base running, excellent baseballing. Bryant was cheered loudly by the hometown fans again in yesterday’s game. In his emotional return to the Windy City Kris Bryant went 4-12 and was a terror on the base paths.

Austin Slater had two hits and run driven in to raise his batting average to .232. Speaking of Mr. Slater, he was involved in a collision with the aforementioned Bryant on a fly ball to right center in which Bryant appeared to be in good position for the catch. Because Slater never called Bryant off loudly enough, the ball dropped between the two outfielders as their gloves collided, costing Logan Webb a run. Fortunately neither player was hurt on the play. Slater also mis-played a fly ball to deep center that he lost in the sun. It was scored a double and cost Webb another run.

If you are keeping score at home that’s two runs Webb should not have given up because of poor play in the outfield. Logan Webb would still earn his tenth win in going six innings and allowing four “earned” runs but that is a bogus box score line. The truth is Webb was mostly fantastic again. His slurve was nearly impossible to hit. His fastball, which he should have thrown more often in my opinion, was effective up in the zone. He surrendered only two walks on five hits (the official line is six hits but one was that fly ball lost in the sun). The surprise of the day for Webb may have been the use of a change up that was absolutely devastating to the Cub hitters. If Webb develops the change up to go with his slurve and fastball then we may be looking at the 2022 Cy Young Award winner ladies and gentlemen.

The key to the game may have been the bottom of the seventh inning when Webb encountered trouble. Tyler Rogers would end up retiring Wilson Contreras on a called third strike with the bases loaded and one out and two runs in. It was the at bat of the game. He would then strike out Aflonso Rivas, also on a 3-2 count to end the inning and the threat.

Jake McGee pitched the ninth to get the save despite allowing a double. That save is McGee’s 31st in 36 tries.

With the victory the Giants finished 6-0 in a road trip that appeared quite treacherous a week ago with a hot Cubs team and a Rockies team that is among the best in its own ballpark.

Since the Tinsel Town team in Southern Cal won the Giants still have a lead of 2.5 games with 19 to play with a record of 93 wins against 50 losses. The Giants have a game in hand against their rivals who have 18. This means if the Giants go 10-9 the second place guys, who are currently 91 and 53, would need to go 13-5 to win the division. If they went 12-6 they would tie our boys at 103 wins. Austin Slater was reinstated in yesterday’s game. John Brebbia and Caleb Baragar were sent to Sacramento.

Tonight the Giants begin a four-game series against the Padres. It will be Yu Darvish against Dominic Leone (in a bullpen game) in the series opener. First pitch is at 6:45 PM, Willie Mays Field time.