Giant Resilience in the City of Brotherly Love 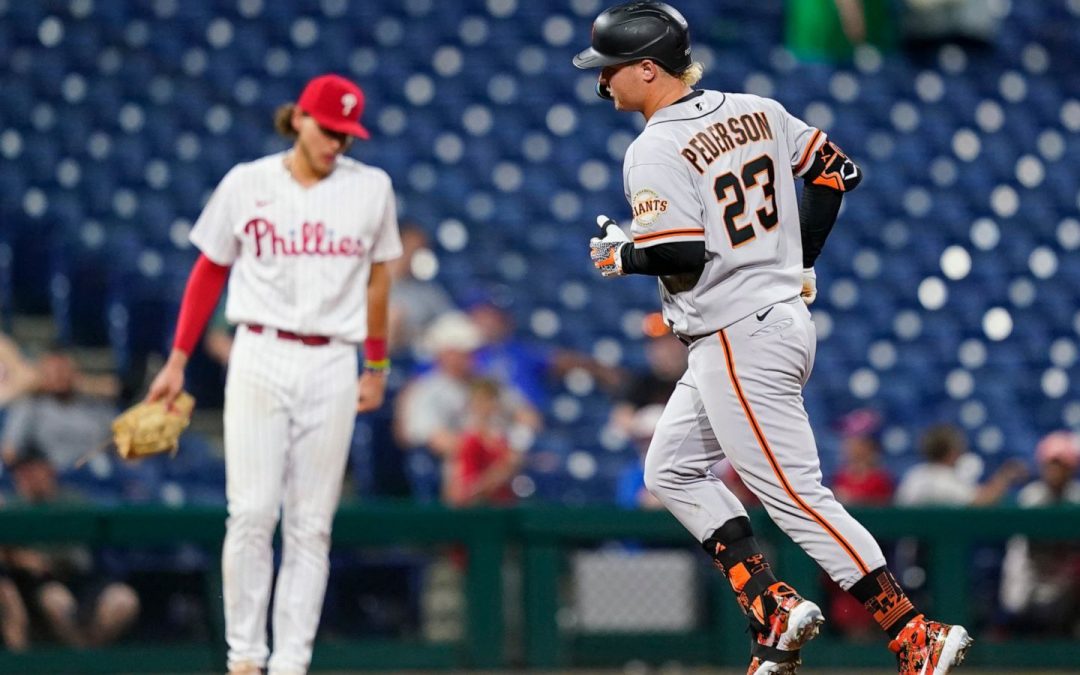 Joc “Babe” Pederson hit a two-run home run in the top of the 11th inning right after Donovan Walton (the former Mariner) hit a run-scoring double to give the Giants the lead. Walton’s double was a howitzer off the top of the wall in right center and got the Giants a tenuous one-run lead. Pederson’s blast came with two outs on a curveball down the middle and low. It was, by no means, a bad pitch from a pitcher’s standpoint. Mr. Pedeson sent it deep into the Philadelphia night into the second deck. It was hit so hard and so fast it might have hurt a spectator and made permanent damage in the architecture of Phillies Park.

Gave it a Jocular pat-down and cleared for passage pic.twitter.com/LDRfaXafXI

Pederson has kind of an awkward swing, like his tugging the bat through water it appears. But that tugging generates a phenomenal amount of bat speed and send baseballs into orbit. His prowess as a slugger is simply stunning and kudos to the Giants for finding ways to get him into the line up and in good spots with runners on.

The homer was Joc’s twelfth of the season and puts him at the number five spot among National League leaders.

Luis Gonzalez Has a Day

Luis Gonzalez went 4-5 with two runs batted in. He was one of only two lefties in the line up to start the game against Ranger Suarez, a big lefty turned starter with a superb change-up. I mention it because Gonzalez has shown the ability to hit lefties and righties this year. So far he is a revelation!

Here is the two-run double in the top of the fifth inning:

The Giants took the lead in the tenth inning on a run that scored when Joc Pederson hit a hard smash grounder to the first baseman Rhys Hoskins who made a very good play catching the ball made an accurate throw to a late-arriving Famiglia covering the base. As he was running he did not catch the ball cleanly, allowing Wilmer Flores to score from second base.

I would be remiss if I did not mention that the Giants used eight pitchers in this marathon of a game. Junis started, pitching four innings and allowing only one run. The Giants had many scoring chances early on and could not capitalize, going 0-8 with runners in scoring position to start the game.

But the Phillies tied it with two outs in the bottom of the tenth when a routine ground ball hit up the middle with Walton and Crawford ready to field it with a runner on second, bounced over the second baseman’s head as it hit the bag. It was nothing but bad luck and the Giants recovered nicely, showing their resilience and mental toughness as a team despite all the adversity faced in this game, beginning with the news that Darrin Ruf had to go on the bereavement list due to the sudden passing of his father. We send our prayers to him and his family.

Gabe Kapler decided to walk Bryce Harper with two on and two outs in the bottom of the 11th inning. Harper represented the tying run and though the baseball maxim says you never walk the winning or tying run, I loved the move. It was, in fact, suggested by Joe Bart and Kapler concurred. Kudos to both. Jose Alvarez got Quinn to strikeout to end a long and another very exciting game.

The Giant Manager did not come onto the field or into the dugout for the National Anthem and it is becoming a thaaaaaaang in the national media. Kapler is getting a bit tired of discussing it as one can ascertain from this:

“The protest was not about the anthem and I think I made that clear as well,” Kapler said. “The landscape is ever-changing and these issues are not black and white. They require — in my opinion — a lot of thought and a lot of action. I don’t know that it’s necessary to answer questions about this on a day-to-day basis about whether I’m coming out for the anthem. I think it important to recognize that peaceful protest of any kind on important issues like gun control and in particular gun safety are important to me and I will continue to be expressing my thoughts going forward.” The win moves the Giants to 5.5 games behind the Bums who lost. Our boys are now 27-21 and have taken the first two games of the series.

Evan Longoria was removed from the game with what was described as “right shoulder tightness” and was replaced with a pinch-hitter after one at bat. Tommy LaStella was the pinch hitter and stayed in the game.  Once again the Giants veterans are starting to show their age…

The series in Philadelphia wraps up with a game scheduled for 6:05 PM, Independence Hall time. It will be Rodon vs Nola, a very good matchup.