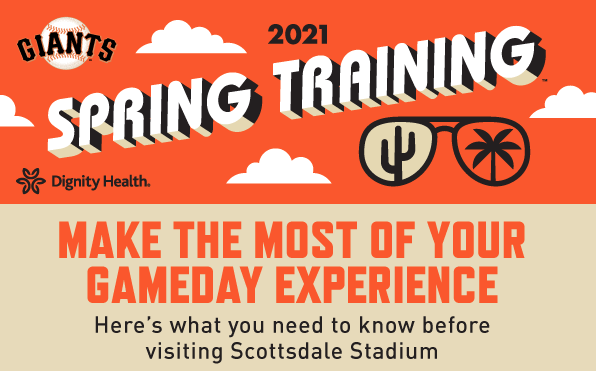 Yesterday the Giants reminded fans of their official health and safety protocols for attending Spring Training home games in Scottsdale. It’s a strange and new world we are now living in and I suppose being able to attend Spring Training games is trivial compared to the bigger issues related to the pandemic. See below for the graphic on all the protocols. Interestingly, the Giants included a note about Scottsdale Stadium being a “cash-free facility.” What a world we now live in when you cannot even pay for a hot dog at the ballpark with good old fashioned American dollars!!!

One other note: The Giants Dugout Store by third base is open!

As Black History Month (February) officially ends, The Giants posted a nice video on the history of the Black community in baseball.

As we near the end of #BlackHistoryMonth we reflect on the courage, strength, and perseverance of the Black community in baseball.@renelsfvoyce | #SFGiants pic.twitter.com/kwcCYXnbZW