Giants Arrive in Miami Via Fax 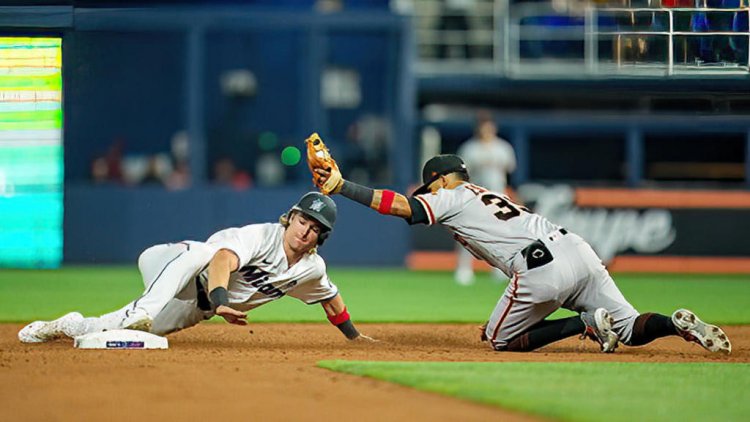 Flat or Flat Out Out-Pitched?

It’s one thing to say the Giants came out flat in their 3-0 loss to the Marlins last night in Miami but the truth is that would not be the whole truth. Sandy Alcantara is one of the elite, maybe top three pitchers in all of Major League Baseball and last night he had his way with the boys from San Francisco. The Marlins were coming off an excruciating double header the day before in Denver. They had to fly home and arrive in the wee hours of the night.

It did not matter because Alcantara was comfortable in his bed sleeping while his fishy brethren were going through their long return home. In the first inning the Giants had two on and Joc Pederson up. Pederson had reach based 18 of his last 35 times. He smashed along fly ball to deep center that sounded and looked like a 3-0 blast. Instead it was caught and Alcantara settled down from there.

Or, maybe the Giants were so flat that they could have arrived via fax into Miami?

The game hinged on that at bat, as often happens when pitchers have rough first innings. In all, Alcantara threw 29 pitches in that inning so we were all thinking, hoping that he would not last long, that Alex Wood would hold the fort and then the Marlins bullpen would be torn open by the Giants sluggers.

That did not happen… well, Alex Wood pitched relatively well allowing only 2 earned runs in 5 1/3 innings but against Alcantara it was not enough.

The Marlins got on the board first in the bottom of the second as a result of a throwing error by Jason Vosler on a ground ball by Garcia. The play was scored a hit but I would say it was an error. Vosler made a great play to get the grounder to his left, diving and scooping a short hop, only to fire the ball over the head of first baseman Wilmer Flores. Garcia advanced on the throw and scored on an infield single.

Boy oh boy do the Giants miss Evan Longoria when he is not playing.

In the bottom of the sixth Wood allowed a lead off single and was promptly lifted. His replacement, Camil Doval, allowed an RBI single by Aguilar on a sizzling fastball on the inside corner that was turned on and lined down the left field line and landed on the chalk. It was that kind of game for our boys and it was one hell of an impressive piece of hitting. After the double Doval would allow an RBI single on a soft grounder up the middle and just like that it was 3-0.

The Giants were quiet all night, even after Alcantara was pulled after seven innings. So much for the Marlins bullpen fatigue.

The Giants ended up with three hits on the night but did strike out eleven times.

BCraw Scratched from the Line Up

Brandon Crawford was pulled form the starting line up due to a bad cold. The Giants say it is not serious and it is not Covid, so at least that’s good news. He should be back soon. These Are Not Your 2021 Giants

Sooooo, with the loss the Giants are now 3-4 on the road trip with three to play in Miami. That’s simply not good enough against teams they should be beating, particularly since the Reds, Phils and Marlins have records that are much much much worse than that of the Giants.

What this game shows you is that even if Alcantara had little leagues playing the field behind him, he likely wins the game. He’s that good.

It also shows that the Giants of 2022 are not the Giants of that magical, crazy, simply un-repeatable 2021 107-win season. They just are not. It was ridiculous to think that Brandon Crawford could match his MVP-caliber season this year. There is no Late Night LaMonte. Longoria and Belt have missed a ton of action. The Giants pitching, from top to bottom (with the exception of Webb and mostly Rodon) has been a disappointment. The defense is terrible. This is a team that was constructed with an everyday line up of all hit no field type players who simply do not belong on a Major League baseball diamond. We know who they are.

This is a team built on the cheap with the belief that coaching, metrics and that San Francisco spirit would be enough to compete with the Dodgers, one of the greatest regular season teams of all time. It’s not happening in 2022. The talent deficit with the Bums and Padres is simply too big. What discourages me even more is the poor play of most of the upper echelon draft picks in the Zaidi regime, so far. Couple all this with the fact that free agents do not want to play in San Francisco or the Giants do not want to pay what it takes to sign them, and you have a potential for a disastrous 2022, 2023 and beyond.

I do not want to be a fan of the San Franciso A’s. If the Giants are going to be run like a small-market team and not develop and draft top-flight pitching and hitting then……

Then there is the decision to let Gausman walk. He, who is having a Cy Young caliber year for the Blue Jays.

Then there is the question of a massive drop in attendance…

It’s looking more and more like 2021 was lightning in a bottle.

The series continues tonight in Miami with a game scheduled for 6:40 PM, Jose Fernandez time. It will be Cobb against Hernandez.