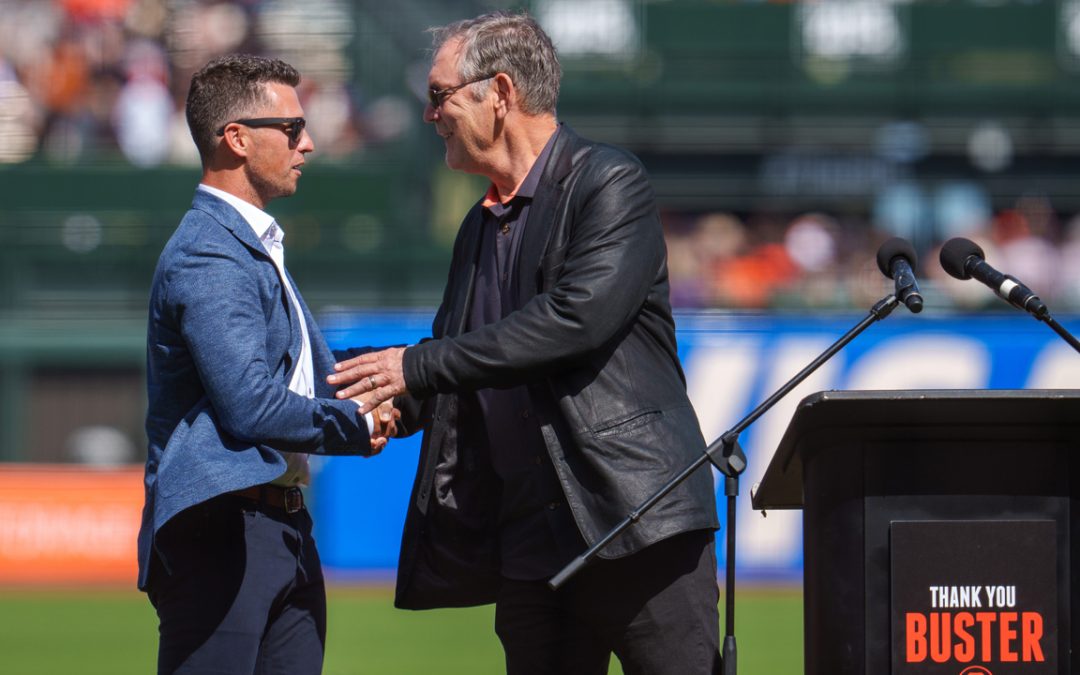 Buster Posey = Three World Series Championships. That’s the most simple equation I can think of when I think “Buster Posey.” On Saturday the Giants feted their legendary catcher who announced his retirement after last season. It was a banner day to be sure. There were guest appearances and speeches by the likes of Bruce Bochy, Bengie Molina, Jeremy Affeldt, Matt Cain and even Brian Wilson.

How cool is this: Bengie Molina honored the man who replaced him and asked him to sign his Buster Posey Jersey?!!

Here is the official Willie Mays Field video of the ceremony.

Here is a cool interview Buster did with Amy G this weekend.

Dr. Lefty wrote a beautiful tribute to Buster on Saturday.

Here is my ode to Buster from when he announced his retirement.

Andrew Baggarly wrote a beautiful article on the day and on Buster Posey’s career. It’s a must read and contains this gem:

Back in 2011, when Posey was coming off his NL Rookie of the Year season and the club’s first World Series championship, he attended the annual Play Ball luncheon and was swarmed by fans. As he moved through the crowd, he noticed an elderly gentleman wearing a Giants hat covered in dozens upon dozens of pins collected over the years.

If there were any fans that drew Posey in more than kids, it was his elders.

“You must’ve been a fan for a long time,” Posey said to him.

The elderly man was named Jack Bowman, who had season tickets in the disabled-access row at the top of the field level behind home plate. They spoke for a few moments. The conversation turned to Jack’s service with the Marine Corps and Posey’s face lit up. He asked a bunch of questions. Jack, in his gravelly voice, said he served in World War II and Korea.

“Wow, wow,” Posey said, giving him a firm handshake. “I want to thank you for your service.”

Then Posey flagged down a team photographer and asked if Jack would pose for a picture with him — the opposite of how these things usually work. Then Posey made sure that a print of the photo would find its way to him, and once it arrived in the mail, he promised to sign it. Before long, Jack was showing Posey’s autograph to everyone in his section. It brightened up his world.

This is one of my favorite Buster stories.

The best catcher in #SFGiants history. Thank you, Buster. pic.twitter.com/ivbNjjLblm

Now Back to the Game

Of course, the Giants had to win on Buster Posey Day, and they did, finally breaking their five-game losing streak with a bombastic 13-7 victory over the Cardinals. Wilmer Flores hit a grand slam. Mauricio Dubon hit a rocket over the center field wall and Darrin Ruf hit his first homer of the season. Logan Webb earned his fourth victory. It was a glorious day all around.
Here is Wilmer’s Blast:

The Giants and Cardinals conclude their four-game set today with a contest at 1:05 PM, Willie Mays Field time. It will be Dakota Hudson vs Jakob Junis.

Finally, Happy Mother’s Day to all the moms of the world. Your love and dedication make us all better.