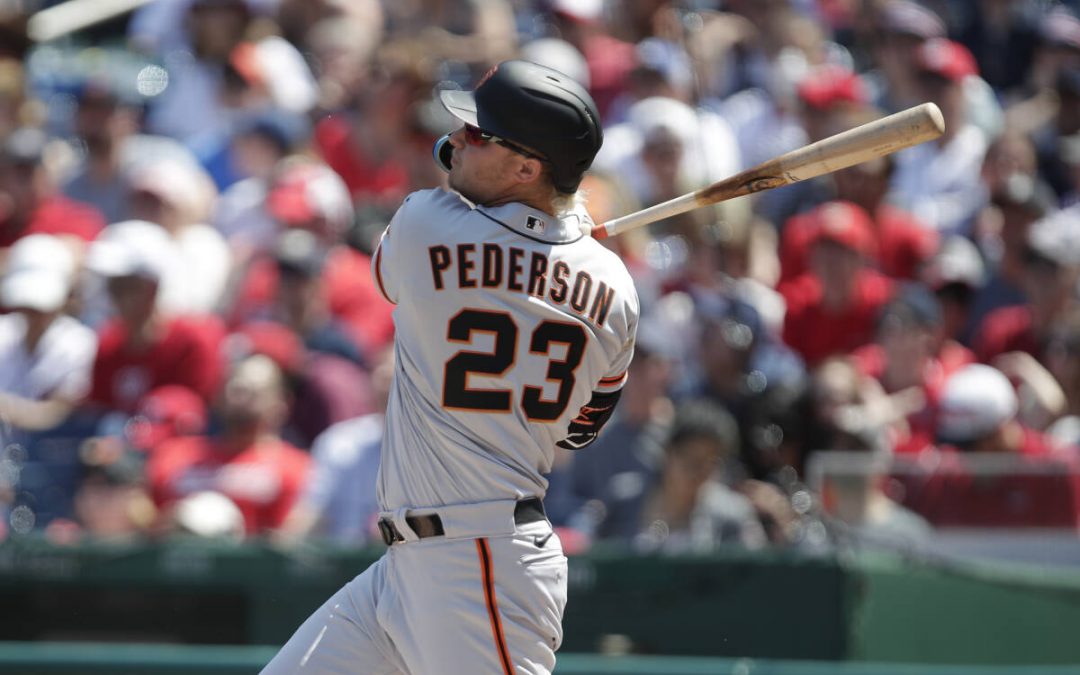 That’s the call from Jon Miller on Joc Pederson’s second home run of the game in the Giants 12-3 mashing of the Nationals that gave them a three-game sweep in D.C. over the weekend: “There’s a long drive. That’s headed for Baltimore!” At the time it gave the Giants a 6-3 game in what would end up being a laugher but was 4-3 in the top of the fifth before Pederson’s blast. This was a fun afternoon folks. With all the talk about bunts and finding new ways to win after the Giants scored 49;7% of their runs on the long ball last season, the Giant bats are starting to heat up and bellow thunder. Between Austin Slater’s three-run blast Friday, Pederson’s heroics and biig production from the likes of Wilmer Flores (3 RBIs), Luis Gonzalez the new Giant (2 RBIs) and Austin Slater again it was a fun day at the yard Sunday.

“I think he set the tone for the day. I think he’s picking really good pitches to go after and even when he gets deeper into counts and pitchers have velocity, he’s able to catch up to that velocity.”

JOC DOES IT AGAIN pic.twitter.com/e0BtLn7mjv

Pederson’s first homer came to lead off the game. It was a 441 foot bomb, the longest of the year so far for the Giants. Joc was batting leadoff since Yaz was pulled after testing positive for Covid-19. Welcome to the lead off spot Mr. Pederson. He is now hitting .364 with five homers and ten ribeyes as a young Giant. Not bad.

Here is the leadoff homer:

Pederson and Flores would also have three hits in the game that saw the Giants take their current road trip record to 7-3 in emphatic fashion.

Pederson is one of the more interesting stories of the Giants off-season. With all the clamor about the need for right-handed power, particularly in the outfield and with the loss of Kris Bryant and Buster Posey, Farhan Zaidi did add depth in the left side with the addition of the former Dodger. Baseball is a funny business. One season your root for a player to fail, find his antics hotdoggish and annoying and generally loathe him then the next season you cheer his heroics.

Logan Webb earned his second win of the season pitching into the seventh at 6 2/3 innings and allowing three runs on one walk and six strikeouts. He did retire eight of the last nine batters he faced in what was a good day despite Webb not having his “best stuff” as they say after a few early struggles. When your club scores 12 it takes a bit of pressure off the starting pitcher and I am sure Webb was appreciative of the runs, allowing a nice little exhalation.

I remember when, not so long ago, a trip to Washington D.C. was a tough ordeal. The Nationals, for the better part of a decade, were an elite team with a loaded line up and a tremendous starting staff that had as much talent as anyone in the BIGS. That’s not the case anymore. With the team tanking and rebuilding, a sin in itself, the Giants took care of business in a professional manner.

The Giants travel to Milwaukee to conclude their road trip for one game with the Brewers. Yes, that’s correct, one game. It is an example of the way MLB had to fill in games that were missed due to the delay of the start of the season. It will be Sam Long vs Corbin Burnes with first pitch scheduled for 6:10 PM Gorman Thomas time.