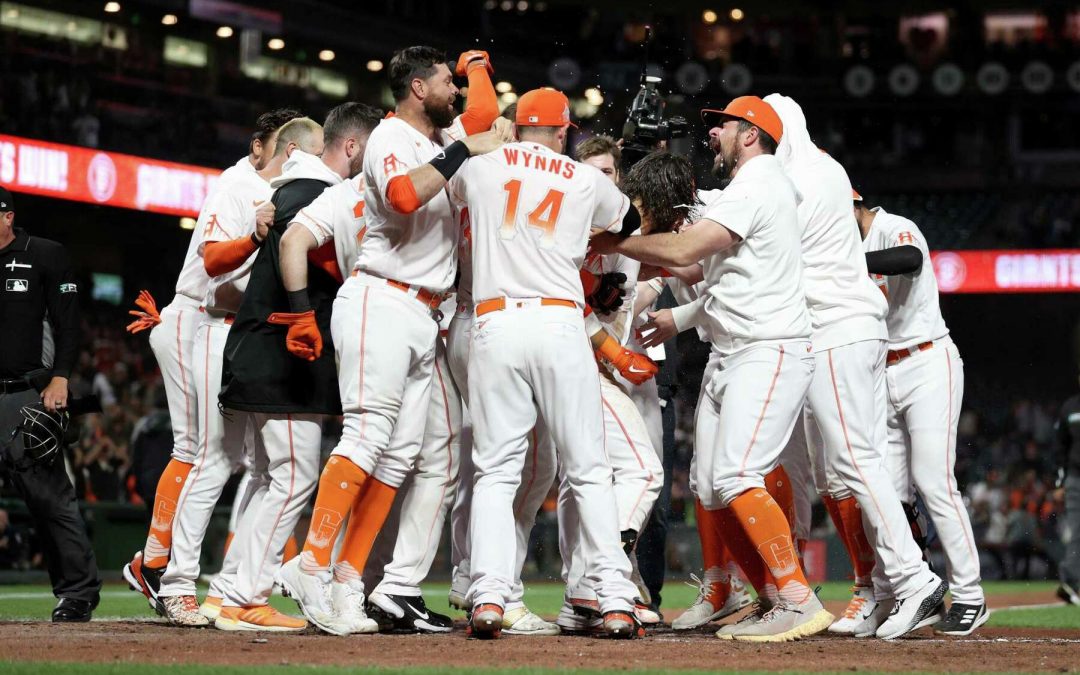 This is what makes baseball special:

Walk off baby! They may be tired at school tomorrow 😜 pic.twitter.com/FqnFw1aDwI

Brandon Crawford hit a two-run home run to dead center field with two outs in the bottom of the ninth inning and with the Giants trailing the Diamondbacks 1-0 at the moment. The homer by the Giant shortstop sent the crowd into a frenzy and gave the Giants their fifth straight win on a night when Jakob Junis pitched seven excellent innings allowing only one run on four hits. He would also strike out seven Arizonans as he matched Merrill Kelly inning for inning with the only blemish being a homer by Walker in the top of the fourth inning.

From there it was a 1-0 ballgame until the bottom of the ninth. That’s when the fun started with Longoria popping out and Yaz flying out. The scenario: The Giants are down to their last batter on a night when they have been completely shutdown by the DBacks pitching. Up comes Thairo Estrado who hits a booming triple off the bricks in right field on a high fastball out over the plate. Daulton Varsho made a valiant effort to snare the hit which hit the bricks only a foot or so above his glove. A better timed leap or a taller right fielder, think Hunter Pence, and the game is over. Still, for Estrada, it was a fantastic example of hitting and base running. Since the play was in front of him Estrada knew he had to keep running hard for the potential three-bagger and with the long carom he made it standing up.

“Of course there was an opportunity. Until the last out, there’s always a chance. The last two times up I’ve been able to deliver.”

The stage was set for Brandon Crawford.

It’s no secret Brandon Crawford is not have a season that is even close to his MVP-caliber 2021 campaign with an OPS at  .656. I still think he would have been a deserving Most Valuable Player last year. But that’s water under the bridge. Last night, down to his last strike he clobbered a low and inside fastball to dead center to win the game and give the Giants continued momentum in a four-game series. The home was vintage Crawford: a short, powerful lefty stroke back up the middle on heat. When Crawford is hitting he can hit any pitch anywhere with power. He is a hitting unicorn when he is on.

The Junis Curve and the Junis Slider

But I want to talk about Junis. On this night his curve and slider were excellent, even though he got away with a few up in the hit-me zone. What makes Junis so interesting is the high percntage of crooked pitches he throws. The batters know its coming but his mix of speeds and his mix of breaks means it is never an easy at bat. Thee is a subtle but crucial difference between a curve and a slider and Junis knows how to throw them both and he throws them to righties and lefties. That takes some nerve and Jakob has it. He challenges hitters and last night he did not allow a walk. On paper Kelly vs. Junis is a big advantage for the Dbacks but the young righty, one of the crucial pickups of the season, did his job and kept the Giants in the game. It’s all you can ask for from your fifth starter. The Giants have gone once through the rotation and won all five games with great starting pitching. Even Sunday’s wacky win in which the Giants gave up seven runs, was an example of good starting pitching with Wood going six and allowing three, enough for the Giants to come back even the the bullpen was a bit porous on the day.

It will be Zach Davies versus Carlos Rodon. Rodon will be pitching for his fifth straight win. Game time is 6:45 PM at Willie Mays Field.