It Was Nice While It Lasted 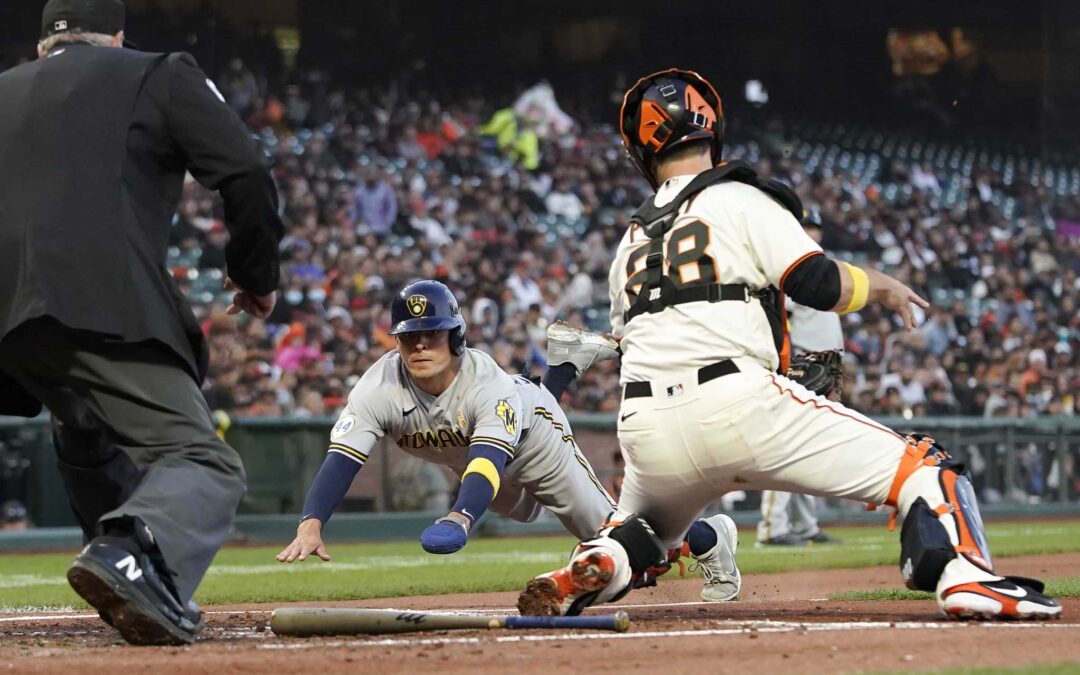 This is getting serious. Yesterday the Giants lost their fourth straight game, third straight at home against the Brewers. That latest loss coupled with a win by the team that shall go unnamed means for the first time in 108 days the Giants are in second place, albeit by only half a game. Since the Giants hold a game in hand and play today while the Los Angelinos are off this second place situation could be temporary.

Last night Kevin Gausman pitched well enough to win, going five innings and allowing only a two-run single in the top of the second. Unfortunately, despite tying the game in the bottom of the fifth the bullpen could not hold and once again the Brewers won the pitching match-up, as the Giants fell 5-2 in what was an exceptionally hard-fought game. The Giants committed three more errors in the game leading to an unearned run in the top of the ninth, a critical add-on run that is. There is no way to be sure the extra outs did not have an impact on the pitchers in other parts of the game but right now their is no excuse for the terrible defense after a sterling season as one of the best fielding teams in Major League Baseball.

The big hit in the game came from Jace Peterson who knocked in a run in the top of the seventh inning off Jose Alvarez after Dominic Leone got into a spot of deep doo doo.

A perfect storm of ineffective starting pitching, slipshod defense and a lack of big hits and power means you lose to teams like the Braves and the Brewers.

The Longoria injury has been A LOT more serious than first reported and the Giant second baseman is still not ready to play. He did take swings in the batting cage yesterday but that means sweet FA with a hand injury. Who knows when he will return. The Longoria absence is absolutely critical right now..

Kris Bryant continued his relatively hot hitting with two hits, one of them an RBI double.

In the bottom of the eighth inning LaMonte Wade Jr. hit a ball off the wall at about 402 feet in right center field. Unfortunately he ended up at second base and the Giants could not knock him in. That blast is a homer in 29 other ballparks, per MLB Statcast.

It was that kind of night.

Darrin Ruf was batting lead off yesterday, in a sign that Gabe Kapler is kind of throwing spaghetti to the wall to see what sticks. It feels a bit desperate frankly. Ruf went 1-4 with a walk.

Austin Slater is struggling mightily and went 0-3 with two strikeouts. He is batting .219. 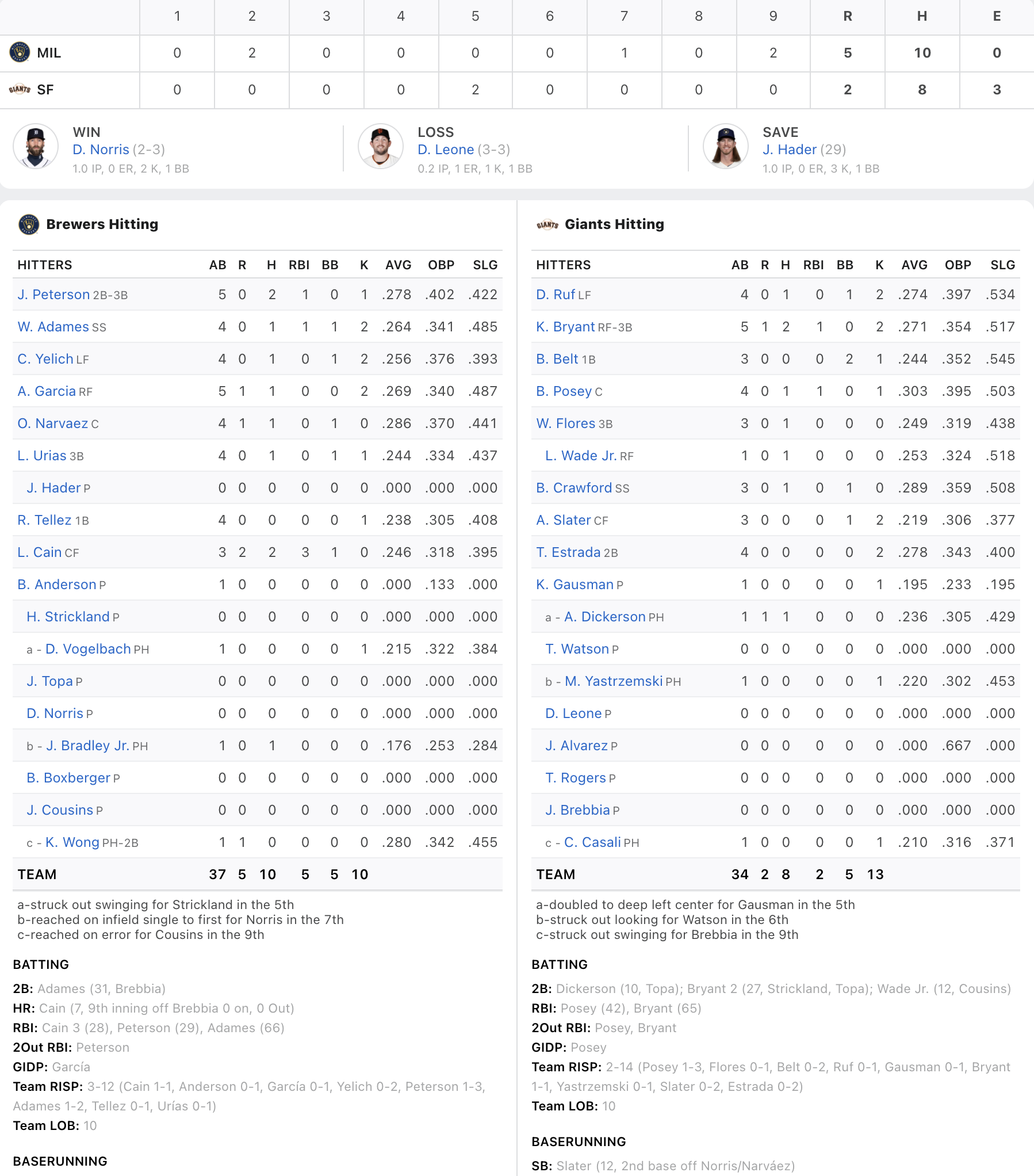 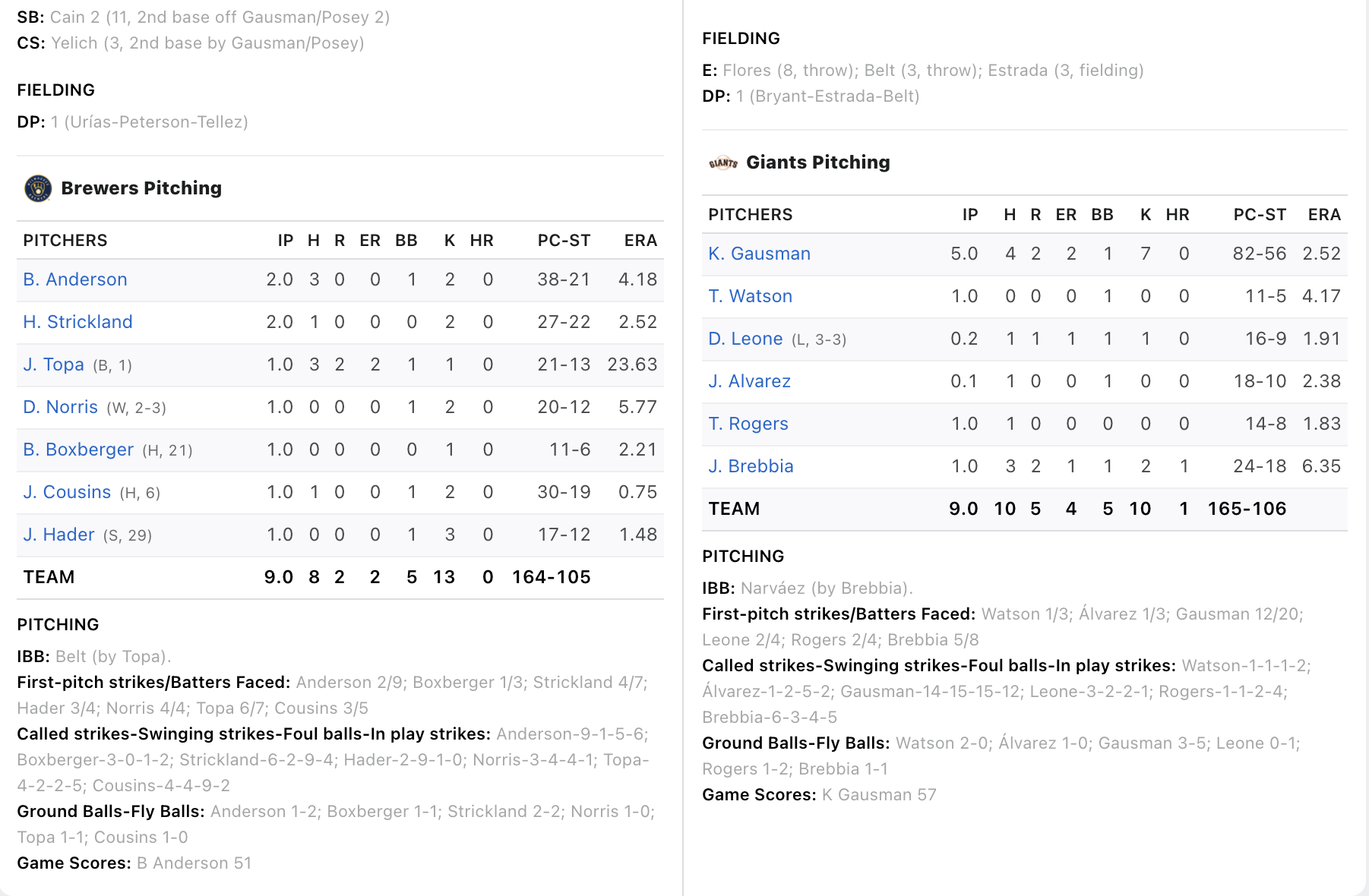 Right now the Giants are in the midst of their second four-game losing streak. They are picking an awkward moment to play their worst baseball of the year but one hopes they turn it out around quickly enough to take back first place. Here is my take: Despite the bad streak of baseball, the Giants could gain a tie for first with a win today and reset their momentum in time for the upcoming three-game series in San Francisco against the team in Hollywood. Needless to say, that three-game series seems likely to decide the division. If LA comes in and sweeps then the Giants are Wild Carders. If the Giants take two of three or sweep, they are in first, depending on what happens today. Losing two of three will not be the end of the world if the Giants win today. If not, then the road back to the top seems a bit lengthy and treacherous. It is fair to say that the Hollywood baseballers have been playing .800 ball since the All Star Break and that seems to be unsustainable. Of course we have all been saying that for two weeks now.

Tommy LaStella was scratched from the game with tightness in his right side. With Donovan Solano on the Covid list the Giants are a bit thin at second base. Alex Wood is still very sick with Covid and will not be ready to pitch for at least a week, if that.

It will be Eric Lauer against Logan Webb in what may be the most critical ballgame of the year to date for our boys. First pitch is at 12:45 PM, Willie Mays Field time.