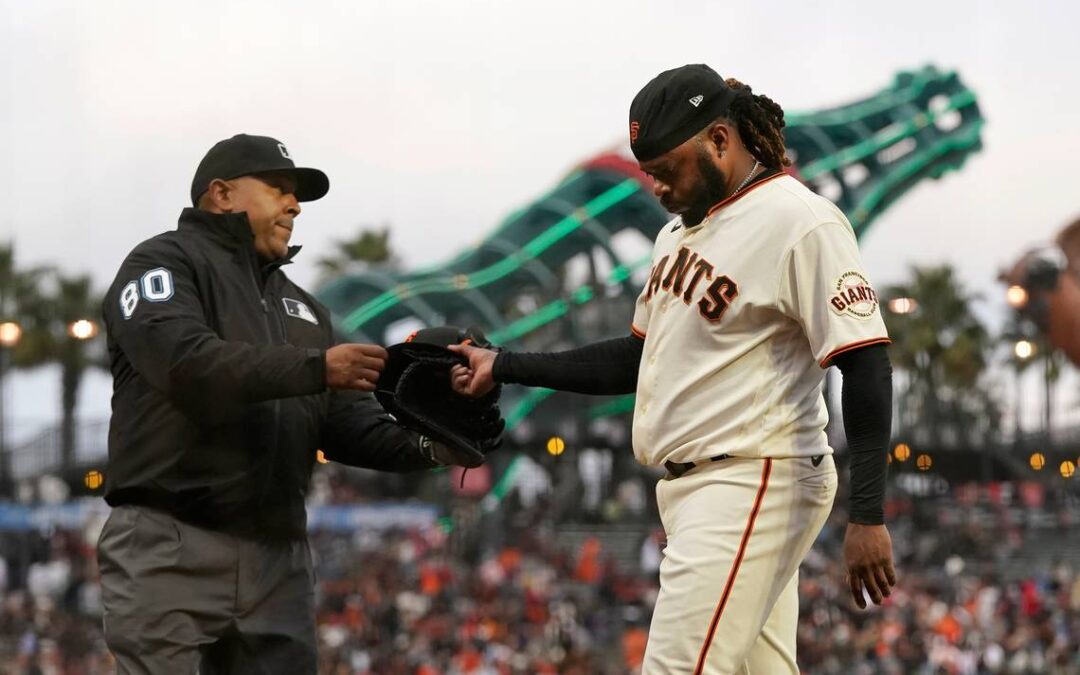 If you look carefully you can see signs of desperation on a pitcher who does not have it on any given day or night. Last night Johnny Beisbol was, to say the least, a bit off his game, erratic and yes, a bit desperate. Giant-Killer three (The Cardinals have three of them in Matt Carpenter, Paul Goldschmidt and Nolan Arenado (It is as if the Cards built their roster simply to beat the Giants in the postseason because they are still mad about 2012 and 2014)) Nolan Arenado hit a two’-run homer in the top of the first. When the ball fist made contact with the bat Johnny Cueto oh so desperately wanted it to be a fly ball to left that he pointed skyward, the way a reliever points to the air when a pop up ends the World Series. Unfortunately for Mr. Dreadlocks, the ball went at least 8 rows deep into the left field bleachers and once again the Giants were down early in a game.

Body Language does not lie and right now Johnny Cueto’s is singing the blues of a pitcher who does not quite have the command of his off-speed stuff to make up for a vastly diminished fastball.

The 6-5 loss wasted a tremendous night at the yard by Brandon Crawford, who went 4-5 and drove in three runs. Yaz had three hits to push his batting average presumably a bit higher than his weight (.231). In all Cueto would end up going six innings allowing nine hits and four runs. Once again St. Louis would tack on single runs in the 7th and 8th that would prove to be the difference in the game. Once again a Giant rally came up short.

The Giants have lost six of nine now but remarkably remain in first place, half a game ahead of the Bums of Hollywood who lost to the Marlins on a Wild Pitch in extras.

In other news Tyler Beede came off the 60-day disabled list and will be the starter Friday against Washington, according to reports out of the Giants offices. We shall see. Beede could give the Giants starting staff a bit of help considering the many questions they have at the back end of the rotation with injuries to Sammy Long, Logan Webb and Johnny Cueto’s inconsistencies.

Aaron Sanchez threw live bp yesterday and appears closer to returning. The Giants were hoping Buster could take some swings in the cage and prepare for possible pinch-hitting duties last night. Unfortunately the Giants catcher could still not grip and swing a bat because of his deeply bruised thumb, putting his appearance in the upcoming All Star game and in this weekend’s series in doubt. Brandon Belt hit off a tee. If you add it all up, The Giants are missing crucial components of their roster right now with Belt, Posey and Longoria all out and the aforementioned pitchers missing games.

This is gut-check time for the Giants. It is most likely the biggest test of their season and if they can get through the next two weeks in first place it will be a minor miracle.

The Giants attempt to salvage one game from the series and they really, really need this win today. It will be Johan Oviedo for the Cardinals and Alex Wood for the Boys by the Bay. First pitch is at 6:45 PM, Willie Mays Field time.