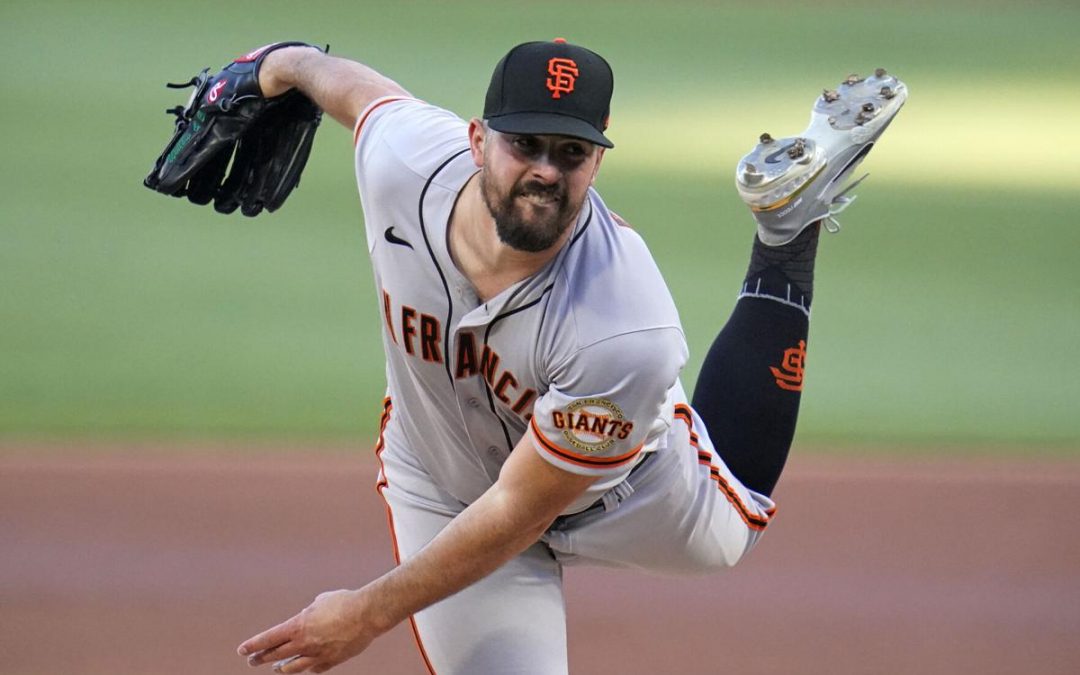 Sometimes I try to come up with cute, catchy tabloidesque headlines to make things a bit more fun when writing recaps after Giants losses. It’s not easy but I get a kick out of it. After last night’s nights ninth inning meltdown that saw the Giants surrender a 3-1 lead with Jake McGee and Tyler Rogers on the hill I am a bit at a loss. This was a tough loss Giants fans, perhaps the most difficult of the season so far. The Giants, on the strength of a fantastic performance by Carlos Rodon and home runs by Mike Yastrzemski and Darrin Ruf were on the verge of taking two out of three games against the hottest team in baseball, the defending World Series champions, in their own park. It would have been a very sweet series victory indeed. Instead it was not to be.

I do not see any cause for second-guessing here: The Braves were just better than Jake McGee and Tyler Rogers in the ninth. McGee was called on to save the game because Camilo Doval had pitched in consecutive games and had been pitching very frequently this past week. There is no need to test the health of the young fireballer so I do not have any issues with the Kapler decision here. The issue was simply execution: the Braves out-executed McGee and Tyler Rogers, the pitcher who surrendered the game-winner off Duvall.

Carlos Rodon Is Back on the Cy Young Track

Remember when in his outings in late May and early June Carlos Rodon was having trouble missing bats with his fastball? That’s ancient history. Last night he went seven superb innings and allowed only three hits and one run on ten strikeouts and a single walk. That’s Cy Young-caliber dominance. Coupled with superb command, Rodon appears to have found his magic once again and that is a beautiful thing for the Giants. It’s just such a pity this amazing outing was wasted with a leaky ninth.

I could write much more about how much I love watching Rodon pitch. He is aggressive. He works quickly and he looks like a pitcher on a mission almost every time he takes the ball. It’s this purpose and intensity that I love. It reminds me a bit of Jake Peavy or Randy Johnson and trust me, it’s down right intimidating if you are a mortal hitter having to face a 99 MPH heater or sliders and slerves of the top shelf variety.

McGee’s nightmare ninth began withe a leadoff home run by Dansby Swanson on a flat fastball (a flastball?) right down the middle on a 3-2 pitch. You can understand why McGee had to groove it. He cannot afford a leadoff walk with a two-run lead to start the ninth. Swanson did not miss it and the game was on at 3-2. With Ozuna on second base Contreras lined another McGee flastball to left to score Ozuna who had singled earlier in the inning. Game tied. Then Duvall did his off Tyler Roger’s submarine ball.  Game over. The key play in that inning for the Braves was a stolen base by Contreras.

We could criticize Rogers all he want but he is who he is. A new pitch would not make him Dennis Eckersley. But with Jake McGee the issue is obvious: He is a one pitch pitcher and it is stunning he has gotten away with being one-dimensional as long as he has. Against the Braves, a great fastball-hitting team, he was over-matched. If I am Jake McGee I spend all my free time on learning a change up or a forkball. He is not long for this world throwing flastballs only, particularly against the likes of Atlanta.

In the top of the first the Giants began the scoring with a mammoth solo home run from Yaz that came off a 96 MPH heater down the middle from Charlie, the Ageless Wonder (38 years young) Morton. It was a bomb and it boded well for the Giants on this rubber getaway game.

In the top of the fourth inning Darrin Ruf did the same thing on the same pitch, only this fastball was 94 MPH and was a bit up and in. Ruf was all over it like a cheap cologne on a cheap assassin wearing a cheap suit. But this homer was not a cheapie. It was majestic and left the park in a hurry.

The Moral of the Story

The moral of the story of this game is when the Giants get great starting pitching they are in pretty much every game. But their limitations in the bullpen and in the field are likely to be the reason for their limited October run should they get to the postseason. I have said this many times and I will say it again until I see evidence to the contrary: The Giants are being run like a penny-pinching small market team. I do not blame Zaidi for this. The Giants rank 13th in total payroll allotment at $153,895, 213. Ahead of them are the teams like the Astros, Blue Jays, Braves and Angels. Money is not everything but I see no reason why the Giants are middle of the road when it comes to spending overall when they are in the top three or five teams when it comes to revenue earnings.

My guess is he is getting directives from ownership. Whatever the case this Giants club has lots of heart, lots of spirit, and some top shelf level arms in Logan Webb and Carlos Rodon. But the defensive issues, the poor roster construction for matchups late in games, the black hole at catcher and the gaping leaks in the bullpen mean if this teams wins 90 games and makes October, Gabe Kapler should win Manager of the Year again. It does not take a genius to see the talent differential when the Giants play the likes of the Braves, Mets or Dodgers. If the Giants are going to be run like the A’s then they will need to draft and develop better and so far the Zaidi regime has a VERY mixed draft record when compared to other teams.