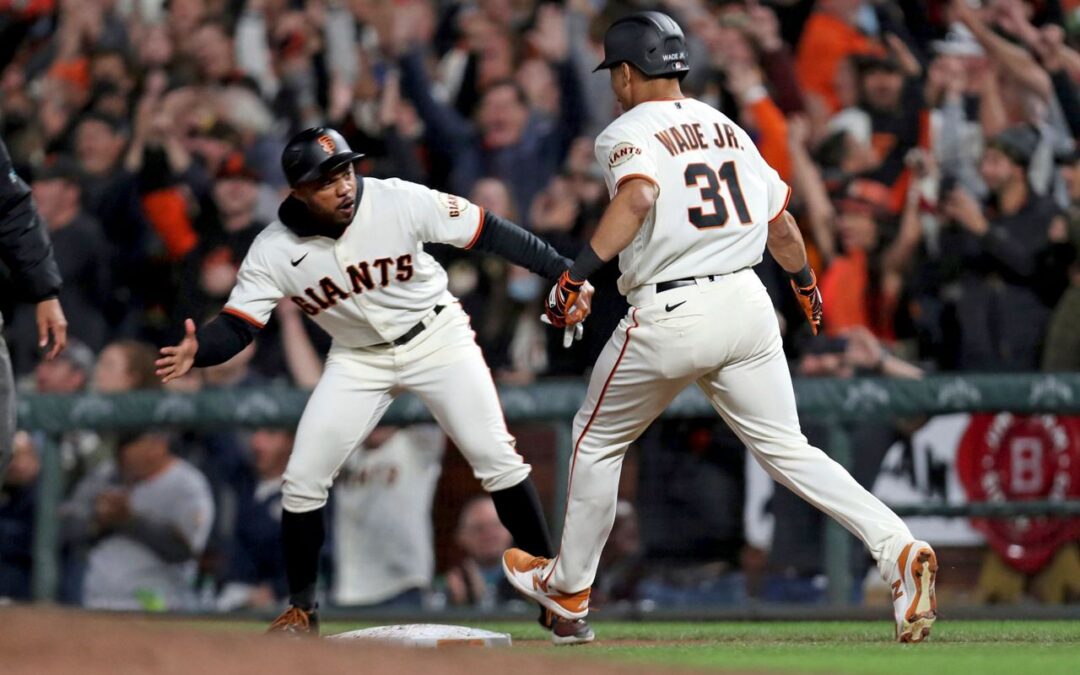 The Magic number is now 2!

I have no idea where to start with this game, an epic 5-4 win that felt more like a Russian novel than a baseball contest.

LaMoney Late Night Wade Jr. was the hero again with a single with one out and the bases loaded on a 1-2 count in the bottom of the ninth. His hit drove in the winning run after the Giants trailed in the game 3-0 thanks to a horrible first inning (I will get to that in a moment).

In fact, matchups and platoons were the biggest subplot of the game.

In the ninth with the score tied at 4 Wilmer Flores hit a one out double. Donovan Solano was intentionally walked, a moved that backfired big time on the DBacks. With two one pinch-hitter Curt Casali drew a walk in a lengthy at bat and in a plate appearance that was the key to the inning. That loaded the bases with one out and brought up Wade Jr, who was hitting because the Giants had no more right handed bats on the bench. It was a matchup that all the analytics numbers say should not happen (lefty against lefty). But LaMoney whispered “F-ck Platoons” before drilling an inside fastball past a drawn-in infield between first and second. It was a lengthy as bat as well that saw Wade Jr. Fight off numerous rough and tumble pitches ranging from a very wiiiiide curve to fastballs and blisterballs up and in.

Wade Jr. show tremendous discipline and plate recognition for a young player and his hit demonstrates why he should be playing much more, even against left-handed pitching.

There is another reason I want to see LaMonte Wade Jr. and Steven Duggar playing more against lefty pitching: their defense.

In last night’s horrific first inning started by Scott Kazmir, platooning was part of the freak show story but not all of it. The inning:

Now the fault does not lie solely with the defense, to be fair. Before the fiascoes Scott Kazmir walked two batters and could not hit the broad side of the bay with any of his pitches. His velocity was down and his control was nonexistent. In short he was just terrible.

Let us now discuss the outfield defense: Austin Slater should never play center field again unless it is an emergency of epic proportions. That is the end of my scientific analysis.

Steven Duggar needs to play everyday in center with Yaz giving him a breather once in an orange moon.

The play with Flores and Kazmir is all on the pitcher who was spectating too much and who failed to tag the runner out down the line when he was about two whiskers away. Outcome: Don’t ask!

Then there was a line shot hit right to Kris Bryant in right field in the top of the fifth and a runner on in a tie game. If Bryant does not move he catches the ball thanks to perfect positioning. Unfortunately his first steps were in. The ball was hit so hard that before Bryant could adjust the ball sailed over his head and scored a run. It was ruled a triple but it was terrible defense, again by a platooning player who plays all over the field and who is labeled “versatile.”

This is what happens when you build a line up and a defense for offense first. You get disaster in the field. You get inexcusable lapses and errors that result in runs. With good defense on more or less routine plays, the Giants win last night’s game 5-0. These errors cannot happen in the postseason where your opposition, particularly the pitching, is the finest in MLB and will not let you back in the game the way the Diamondbacks did last night.

The Postseason and Platoons

In Kapler and Zaidi we trust. 105 wins speak for themselves, even the ugly wons. However, adjustments have to be made to win a World Series. It is high time to get. your best overall players in the line up everyday, even against the. matchup doctrines. It is high time to stop moving players around the diamond like chess pieces because you want to keep their bats in the game. It does not always work and when the defense fails, thanks mostly to lack of experience and lack of mastery of any one position, you get last night’s defensive debacle, and it was indeed a debacle. Since neither of the three egregious mistakes were even recorded as errors in the box score you had to watch the game to understand the impact of those plays.

You cannot master multiple positions just because you have some speed and. you can hit home runs. You cannot be asked to play a competent left, right and third base at Willie Mays Field, even if you are Kris Bryant. Our park has a very difficult right field and it is much too complex for a part-timer. Bryant should be firmly planted in left field, period when he is not backing up Longoria at third.

As for Longoria, last night he had one of his worst games as a Giant at the plate. He did not just go 0-4 with two strikeouts. It was the form of his at bats that lead us to wonder if he is nursing an injury or if he is experiencing some form of crisis at home. His first at bat came in the bottom of the first and Ruf at second after just driving in Austin Slater with a double off the wall in center (in a day game that is a two-run homer). Posey had just hit a weak grounder to the pitcher and failed to advance Ruf. With one out Longoria hit a weak grounder to short on a 1-0 hitter’s count. Bryant then flied out to right resulting in a runner on second with nobody out never moving. It was bad baseball and it cannot be blamed solely on Madison Bumgarner. His swings looked unconvincing and for such a good hitter, one with power, his impact was negative, particularly in critical moments.

Now that my bitching and moaning is over it is time to write about the positives of this game. First, Austin Slater had a great day at the plate. He went 3-3 and atoned for his miscue in center. He scored three runs and started three rallies with leadoff knocks. He was also running the bases with precision, dedication, and focus (the John Wick philosophy of base running). Second, in the bottom of the third inning he advanced to third on a hard hit single to right center by Darrin Ruf, who also had a big day at the plate. Slater’s instincts and judgement made a big difference as Ruf’s ball was hit very had, so hard that any hesitation on the base runner’s part means he has to stop at second. Slater sailed to third and later scored on Buster’s sac fly to make it a 3-2 ball game.

The Giants were battling back.

The boys would tie it in the bottom of the fourth on a lightning strike home to left by Brandon Crawford who was doing his best Will Clark impersonation. The ball was a laser and inside-outed with authority. It was beautiful.

The DBacks would score in the fifth thanks to Bryant’s misadventures in right but then the Giants would answer with a run in the bottom of the inning thanks to Buster’s double. It was a back and forth game but the resilient Giants found a way to overcome their mistakes and secure a desperately-needed win, their 105th of a spectacular season.

Since Scott Kazmir lasted one third of an inning the Giants had to pitch practically an entire game from the bullpen. Kervin Castro came in to pitch in the first and would go 1 2/3 innings overall in pitching effectively despite the bases loaded walk. His outing restored a bit of order to the game before Johnny Cueto came into pitch in the top of the third inning. It was Cueto’s first relief appearance ever and one wonders why he was not the starter instead of Kazmir. Cueto pitched very well going 2 1/3 and allowing three hits on one (not really earned) run that scored thanks to a misplay in the outfield.

Last night Gabe Kapler essentially made the choice to go with a bullpen game to give Desclafani, Webb and Gausman an extra day of rest heading into the weekend series finale with the Padres. It was a calculated gamble that correctly predicted the Giants could beat a weak Arizona team with a mix and match effort of relievers. The key was limiting the damage early and getting solid outtings from Cueto, Castro, Littel and Leone as the Giant hitters battled back. It was a gamble that looked very bad early on but thanks to quick action in the first a three-run deficit was not the end of the world.

Last night Madison Bumgarner played his first game at Willie Mays Field in front of fans while wearing an enemy jersey. In his first at bat, which unfortunately came in the top of the first, he was greeted with a standing ovation and a love tap by Buster. It was an emotional moment as the big fella stepped out of the box, tipped his helmet to the crowd and was visibly moved. Buster, in a a classy pro move stood up from his crouch to let the moment endure as long as necessary. It was special.

In his outing Bumgarner pitched just well enough to lose. His stuff looked crisp despite the slight decrease in velocity. At his best he could hit 94 with his cutter or even two-seamer. Last night he was barely touching 90 and I believe that is the difference between a dominant MadBum and a mediocre pitcher.

The quote of the night came courtesy of MadBum:

“It’s pretty crazy. It’s pretty incredible to see. I know people have counted them out all year and a lot of people can’t understand it and make sense out of it, but I’ve been on that side when people are saying the same thing. I know how dangerous the Giants are just in general when they get in the postseason. I’ve obviously seen that a time or two, so there’s something about that uniform, I don’t know.”

Last night Matt Cain made a rare appearance at Willie Mays Field, presumably to see his buddy Bumgarner face the Giants. He received quite an ovation. It was special. I can smell the bubbly.

Humberto Castellanos will face Anthony Desclafani in tonight’s game at Willie Mays Field as the Padres come to town for the final three games of the season. First pitch is at 6:45 PM.

This is the end of what has been the longest game post of my career.