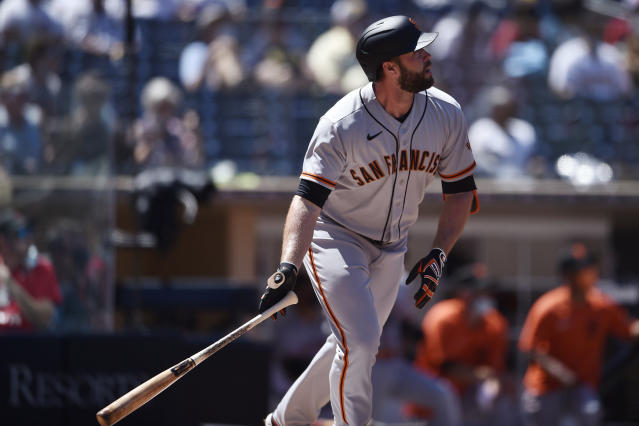 The old saying “It’s better to be lucky than good” needn’t apply to the Giants rubber game win yesterday afternoon in San Diego. Yes, the Giants were lucky, with Darin Ruf’s “home run” coming off the glove of Padre Center Fielder Jorge Mateo then bouncing conveniently atop the wall then rolling off into homerland. It was a weird and difficult play because Mateo had to run a bit and was looking straight into a brutal sun. But the Giants were also very good on this day. The other story was Kevin Gausman who was brilliant again in his second start of the season going seven innings allowing only one run on four hits. His stuff was superb, very hard, very complex.

Another story is the excellent work of Jake McGee and Wandy Peralta in the final two innings.

It was the first career save for Mr. Peralta:

The winning run came on Donovan Solano’s sacrifice fly that scored Alex Dickerson in the tenth. I will not address the horrible extra innings rule other than to say that this time the Giants were the beneficiaries after getting burned badly in so many games last year. It appears that the rule, one of many things I DESPISE about it, favors the visiting team since it is much easier to score and when you score first you put pressure on the home team. It’s just BS and it does not belong in MLB. A home team should not be playing at a disadvantage like that in Extra Innings or ever. It’s just ridiculous and the players need to put a stop to it. What makes baseball special, especially extra innings baseball is the notion of mystery and duration that make games more and more intriguing as they go on. With expanded rosters and lax rules regarding roster changes there is simply no reason to be concerned about games lasting long into the night anymore.

This was a very nice win for the Giants, nicer than most because the Giants earned their first series victory and won a game started by Blake Snell, one of the top 3 or 4 pitchers in the game.