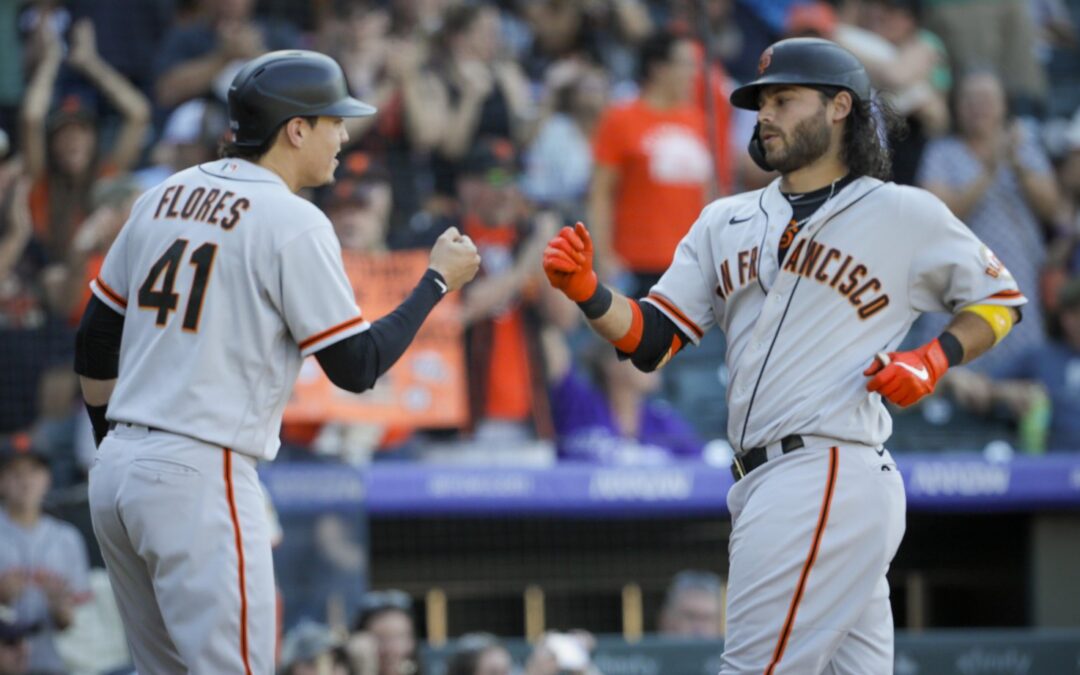 The Magic Number is now 5.

With their sweep of the Rockies thanks to a 6-2 win in Denver, the Giants reached their 102nd victory and remained two games ahead in the National League West with six games to play. The Giants have now won 15 of 19 and swept the Rockies in Colorado for the second straight time. That has never happened before. Not in the Bods Era. Not in the Lincecum Era. Not in the Mays Era.

Brandon Crawford hit a three-run home run just over the left field wall in the top of the ninth and with two outs while the Giants had just scored a run to lead 3-2. The homer was a gigantic exhale and gave BCraw 88 runs batted in on the season, a career-best, and 23 homers, also a career high.

In Craw We Trust pic.twitter.com/54sNPDZNtW

The winning run was driven in by Tommy LaStella with an 0-2 count. Steven Duggar narrowly beat the tag and scored from second after LaStella worked himself into a TommyLaStella hitter’s count (two-strikes). LaStella seems to be at his best when he is facing a strikeout. It is quite something.

Brandon Belt was hit on the left hand while squaring to bunt in the top of the seventh. Gabe Kapler said X-Rays will be taken and examinations will be made but right now BB9 and the Giants seem to be optimistic that the the Baby Giraffe, who hit two long balls Saturday, will not be out too long. Fingers Crossed!

The early story of the game was Kevin Gausman. The Giant ace was making his second start in his home town on a beautiful Sunday afternoon and boy was he excellent. The righty went six innings allowing only a run and struck out eleven Rockies while allowing only three hits (one of them a solo homer to Mr. Cron). He was dominant in every way with deception and with power. His fastball was located all over the zone and it was hard and strong. His splitter was as effective as it could be in the altitude of the Rockies but the surprise of the day was the liberal use of a slider and the occasional brandishing of a change up that devastated the free-swinging Rockies.

Coming into the game with a 5.33 ERA in the second half, Gausman said he made mechanical adjustments and was able to utilize his pitches more effectively.

“For me today was a big step forward. I could just tell from the get-go that I was my normal self and back to when I was going good. That confidence just came back and I felt like I could throw any pitch when I needed to.”

Another game ball goes to Camilo Doval and to Kervin Castro. The power-throwing rookie right handers blew away the Rockies in the 8th and 9th innings respectively. Doval once again threw his slider for strikes and that was all she wrote. He would strike out three Coloradans. Castro had a dominant ninth apart from a harmless single.

Ladies and Gentlemen I present to you the Giants future closer:

Antonio Senzatela of the Rockies was also quite strong in his start baffling the Giants with a mixture of speeds and pitches. The game was a scoreless pitcher’s duel till BCraw drove in a run on a ground out in the top of the third. In the top of the fifth Kris Bryant singled in a run.

A word about Steven Duggar’s winning run: With two outs and Duggar on second LaStella did his magical two-strike hitting in stroking a liner to right. While Dugger is off on contact and is likely the fastest runner on the team the play at the plate was perilously close. If Duggar is thrown out that is the end of the inning and we go to the bottom of the ninth tied. During the action the camera picked up Duggar rounding third and glancing at the left field to gauge the play. This is a Giant no-no. With every turn of the head a base runner becomes a spectator and slows down. Dugger lost a step or two in the process and was nearly thrown out. If he bares down and simply focuses on the plate and picks up the next batter who is supposed to tell Duggar which direction to slide or whether to come in standing up, the play would not have been as close. I have seen far too many base runners across the Major Leagues watching plays as they unfold in a habit that is the equivalent of checking Instagram while you are cruising down the freeway at 80 MPH. It is dangerous. It is stupid. There is no need for it and it has to stop! I wonder if the Giant coaches or Gabe Kapler picked it up and addressed it with Dugger after the game. This is the question I would like to ask if I were at the postgame press conference.

The Giants return home for their final six games of the season beginning with three against the DBacks tomorrow night.

With the Magic Number now at five games the Bums would need to go 5-1 to tie for the division if the Giants split their next six at home against Arizona and San Diego (which was eliminated from postseason contention this weekend). If the Giants go 4-2 the Hollywood Villians would need to go undefeated to tie for the division and force a playoff game in San Francisco. 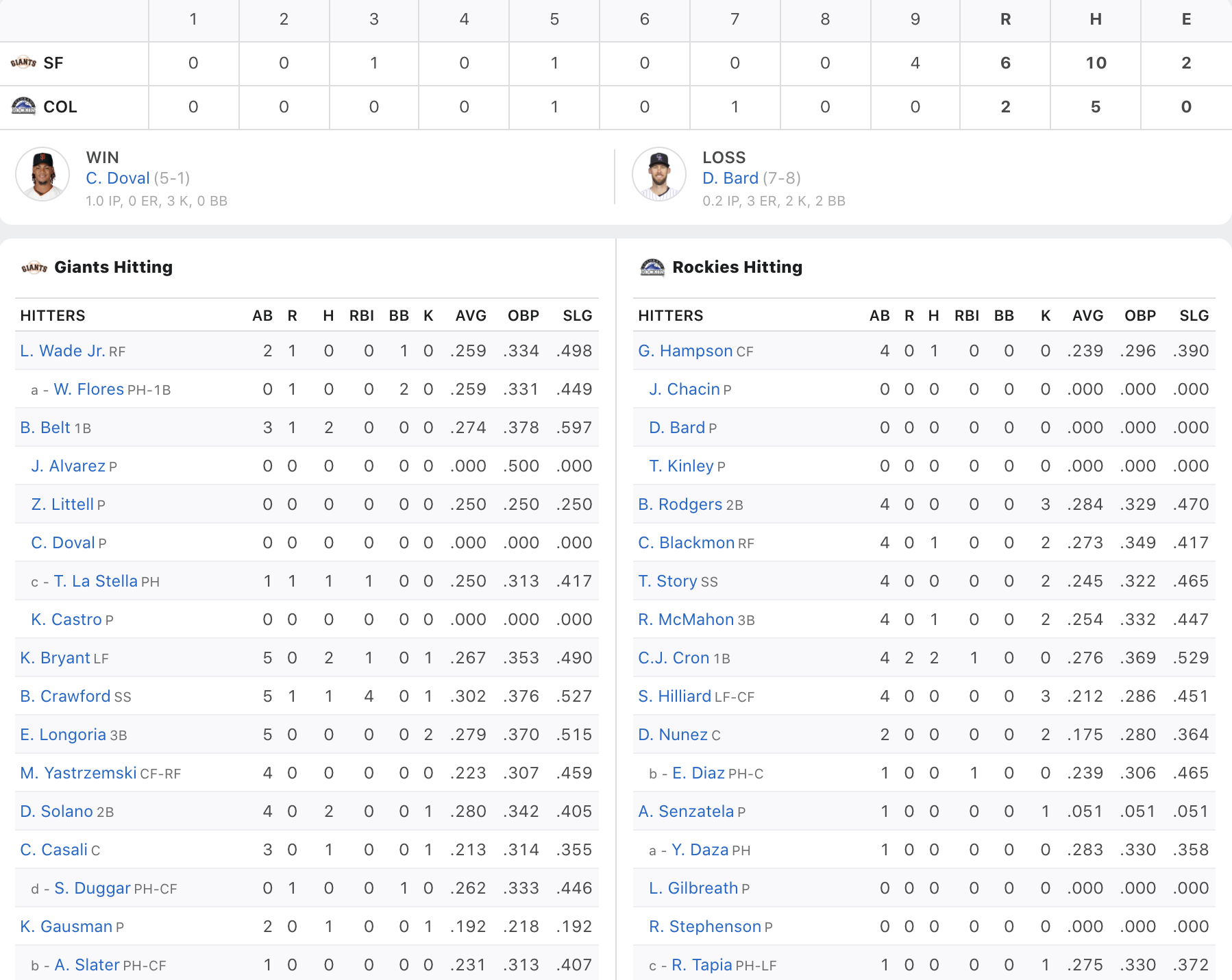 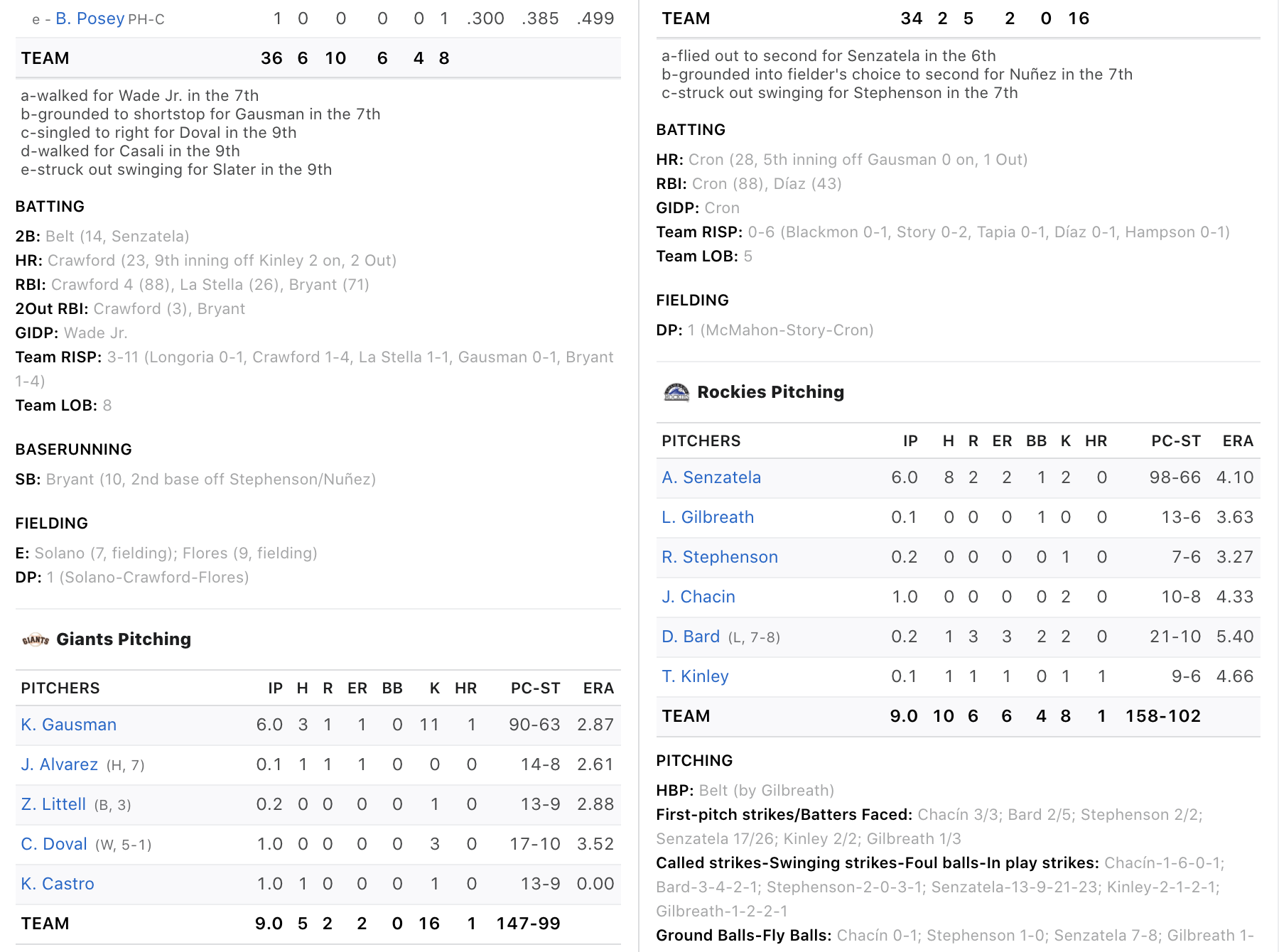 Madison Bumgarner will face the Giants on Wednesday at Willie Mays Field. It will be his first game back to his former yard with fans in the stands, wearing a foreign uniform. It promises to be quite a night. MadBum did something very cool this weekend. He bought tickets to the DBacks-Dodgers game in Phoenix for Brandon Crawford’s two sons so they could root against the Tinseltowners.

The Giants are off today. Enjoy the day off boys! It is well-earned.