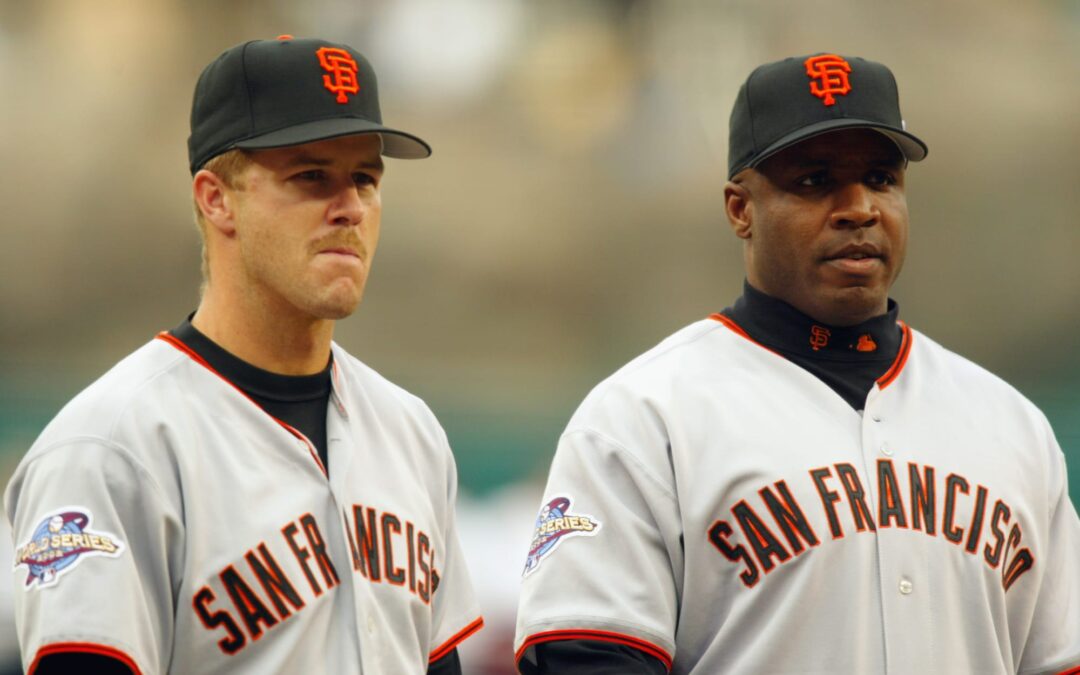 After being snubbed once again by Baseball Hall of Fame voters, former #SFGiants star Barry Bonds, MLB’s all-time home run king, now has just one more chance to get into Cooperstown, and it’s not looking good. https://t.co/1tHpOAxsym

Though I am not yet part of the Baseball Writers Association of America I want to indulge in voting for this year’s Hall of Fame class. Here are my new inductees:

Barry Bonds (Best player of his generation and perhaps in the top five of best players ever)
Jeff Kent (MVP winner, All time Home Run leader among second baseman, great mustache)
Roger Clemens (One of the best pitchers of his generation, top 20 all time)
Manny Ramirez (One of the top five sluggers of his era, amazing dreadlocks)
Curt Schilling (Amazing big game pitcher despite his political views)
Omar Vizquel (Best shortstop of his era, incredible longevity. If defense matters in baseball and we all know it does, Omar is in)

With the exception of Vizquel, every one of my selections has unquestionable HOF career offensive stats. Vizquel is in because he was one of the best defensive shortstops to ever play in the Big Leagues. Manny Ramirez was simply one of the best run producers and big game hitters ever. I don’t care about his PED suspensions.

Next year I would vote Todd Helton and Andruw Jones in.

Here are the complete results of the 2021 Major League Baseball Hall of Fame votes:

This is where I get to the hypocrisy of keeping players like Clemens and Bonds out even though they clearly had Hall of Fame numbers before their alleged PED use. The continued exclusion of alleged steroid users is simply wrong because many players already in the Hall of Fame have already admitted to using some sort of performance enhancer, whether it was the green amphetamines or some sort of miracle cream.

Right now there is a movement afoot to change the way the voting for the HOF is conducted. Many fans and players think it is time to let former players be involved in the voting process. I have read many informal polls and opinions of former Major Leaguers, to a person, they agree that players like Bonds, Kent and Clemens should be in Cooperstown. To my mind, this means a great deal more than some baseball writer’s opinion.

To make the case of the morality clause against guys like Bonds (admittedly a jerk for most of his career) and Clemens is to scrutinize some players unfairly while letting wife-beaters, alcoholics, and other sinners into the hallowed confines of the Hall. It simply does not wash.

Tyler Kepner wrote a fine article on the 2021 Hall voting results. Here is a great excerpt:

To me, the character clause should apply only if a player was, at some point, forbidden to participate because of cheating. If not, his career was fully sanctioned by Major League Baseball, and that’s good enough for me. Bonds and Clemens belong.
-Tyler Kepner

The time has come for a new expanded committee of voters that includes as many former players and Managers as Baseball Writers. Until then, the Hall of Fame will be missing out on many great players and overly concerned with a kind of selected history lesson that singles out alleged PED use and overlooks many other potential issues with current inductees. In short, the current voting system needs to change.