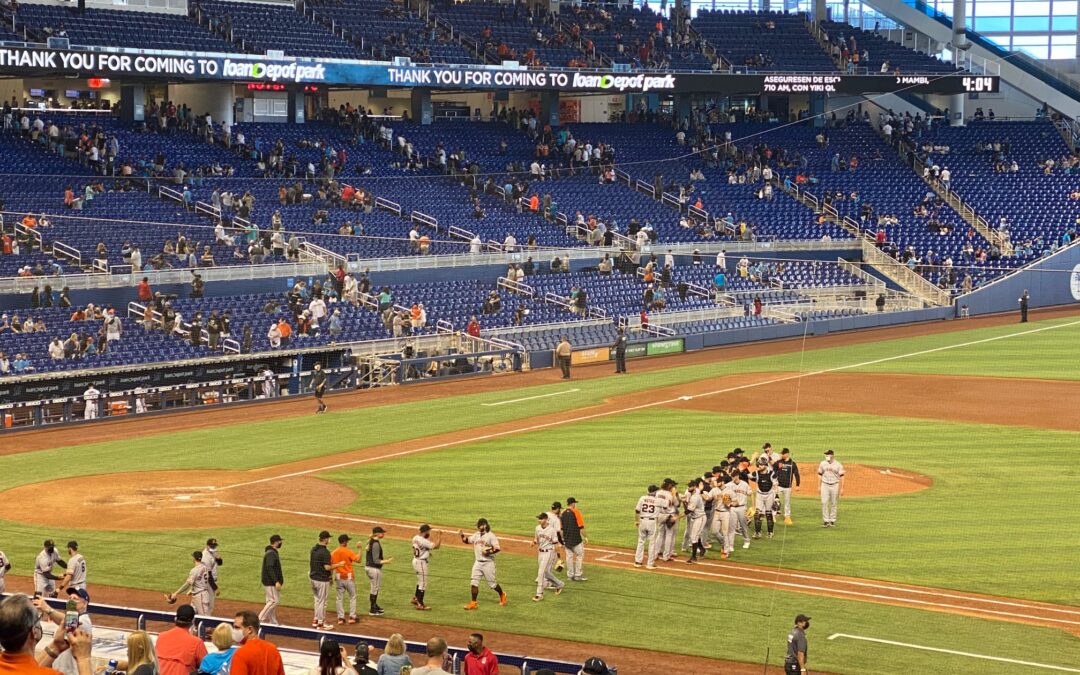 There is so much to explore regarding yesterday’s 1-0 win over the Marlins in Miami for the Giants. Throw in the wild and heartbreaking 7-6, ten inning loss from Saturday night you have enough twists and turns for a Russian novel. Let’s begin with yesterday’s victory that saw Alex Wood go five sterling innings allowing zero runs after escaping a two on, nobody out beginning to his Giants career in the first inning. Wood survived unscathed because the Marlins, in their infinite wisdom, decided on a double-steal only to find Wood pull a spin move and pick off Miguel Rojas between second and third. It was a big moment in a much-needed win after the Giants suffered disappointing losses in the first two games of the series. In fact that moment was indicative of a major theme in the series: Bad/good base-running. It may have been the difference in Saturday’s game when Anthony Desclafani, who reached on a fielder’s choice after pinch-hitting for another Giants reliever because the Giants were out of players in the top of the tenth, failed to score from first with two outs on a booming double by Brandon Belt. The game would be 6-5 Giants till the Marlins won it in the bottom of the tenth. There were many other tales of bad base-running and hot dogging which I will get into in a moment.

Back to yesterday’s game: Wood would be lifted for a pinch-hitter in the top of the sixth when the Giants had a shot at breaking the game open. It would not happen however as pinch-hitter Wilmer Flores popped out meekly with the bases loaded. I was against the move at the time figuring the chances were greater than 50-50 that the Giants would not score and that the extra inning of work by Wood, who was blowing through the Marlins line up was more crucial for the Giants since their pen was taxed the previous night. In fact Wood, whose fastball was a very lively 91 and whose change was undetectable, was simply brilliant in his Giants debut. Welcome to San Francisco Alex Wood.

The Giants Bullpen and Camilo Doval

The Giants relief corps Alvarez, Doval, Baragar and Rogers would hold the Marlins hitless the rest of the way to preserve the much-needed win that prevented the Giants from going 0-3 to start their first East coast trip since 2019. Speaking of Doval, Camilo Doval that is, was making his Major League debut and was absolutely dominant. The big righty threw his first Major League pitch for 97 mph that was a laser beam strike. He struck out two and worked a perfect inning. His slider was exceptionally sharp. Doval arrived straight from Single A! Compliments to Mr. Zaidi for the courage of promoting Doval from the lower rungs of the Giants system. It sends a loud and clear message to Giants prospects: perform and you may find your way to the Giants very quickly, sooner than you thought. Doval is the power arm on the right hand that the Giants sorely need in their bullpen. Kudos to the young man and again, Welcome to San Francisco Senor Doval.

Saturday’s loss set baseball back at least 300 years. The Giants coughed up two leads late because their pitching staff had a WHIP of over 2 for the game! The bullpen was a hot mess and still had a chance to save the game. I will not get into the Jake Mcgee outing again. It is now ancient history. The Marlins left 18 runners on and still won! The base-running blunders from both sides were comical. I already mentioned the Desclafani incident, which by the way was compounded by Ron Wotus’s inexplicable and frankly indefensible decision to hold Disco at third when he would have scored on the play pretty easily. There were other moments like BCraw being unnecessarily overly aggressive and trying to take third from first on a routine grounder only to be caught in a rundown. There were many other base-running fundamentals that were broken or forgotten making Saturday’s game look at times like a sandlot contest between rival gangs.

There is a big problem in the Major League game when multi-million dollar players cadillac to first and hot dog their way around the bases costing their team runs and games. There were evident examples in Saturday night’s game, beginning with Mauricio Dubon failing to run hard out of the box on his grounder to Marlin second baseman Jazz Chisolm Jr. Jazz would bounce the throw that was momentarily bobbled and then grabbed by the Marlins first baseman. Dubon was just a hair late after replay reviews upheld the call. This was a crucial play in the top of the tenth with the aforementioned Desclafani on third and the Giants up one run. They could have used that eighth run badly…

Other examples: Starling Marte runs the bases, particularly third to home (he was on base a lot in the series) as a spectator turning to see the plays, enjoy the aesthetics of the Miami skyline, and generally hamming it up since he assumes he will score easily. On two occasions the plays ended up being closer than he thought. It’s a bad look.

There was Miguel Rojas of the Marlins who hot-dogged it out of the box watching his hard single to center as if he was enjoying Da Vinci’s Virgin of the Rocks at the Louvre only to see Mauricio Dubon butcher the play and have the ball get by him. If Rojas is hustling at even a basic clip he is on second easily and the Marlins would have runners on second and third. The next batter doubled and Rojas could not score from first, costing his team a run in the process. I could cite many more examples of flat out hot-dogging, lackadaisical base-running, or even assumptive base-running (thinking you know how the play will unfold) that I witnessed in the series. It’s awful and something needs to be done to change the culture of Major Leaguers and their preening and general attitudes on the bases and in the batter’s box.

This was a big weekend for yours truly since these were the first games I attended in person since 2019. I had forgotten the joy of seeing baseball in person and the nuances you can only grasp when you are in the park. The games were especially poignant for me now that I live in Italy and I was only able to be in the USA because of a previous positive Covid test that changed my schedule just in time to coincide with the Giants visit. Throw in the fact that I attended all three games with Surf Maui, the World’s greatest Giants fan, and his lovely co-hort Vail Sunshine, a great sport to go to all three games with us, and you have what I consider a beautiful emotional experience (Saturday’s and Friday’s games notwithstanding).

It must be said the Marlins and their staff did a great job enforcing the mask requirements and all the fans were very good-natured. It was especially wonderful to see the Giants fans who made up abut 40-50% of the attendance at all three games. I met and chatted with many Giants fans from all over the US. Our team is beloved by many across America and beyond.

It was nice to see some support in Miami for the game of baseball. There were many local families taking their kids to play in the batting cages provided for free outside the park. There were fans from many colors and languages. It was a small sample of the beauty and joy of America when people get together for a pleasant and poignant purpose.

The photos in this post were all shot by me. We were blessed with fine weather. Marlins Park is a very interesting take on a baseball stadium with a contemporary design and a welcoming outdoor area right smack dab in the middle of Little Havana.

The entrance to the stadium outside the main gate.

A view of the exterior with the beams that support the structure that opens the roof. During the series the roof was closed for all three games.