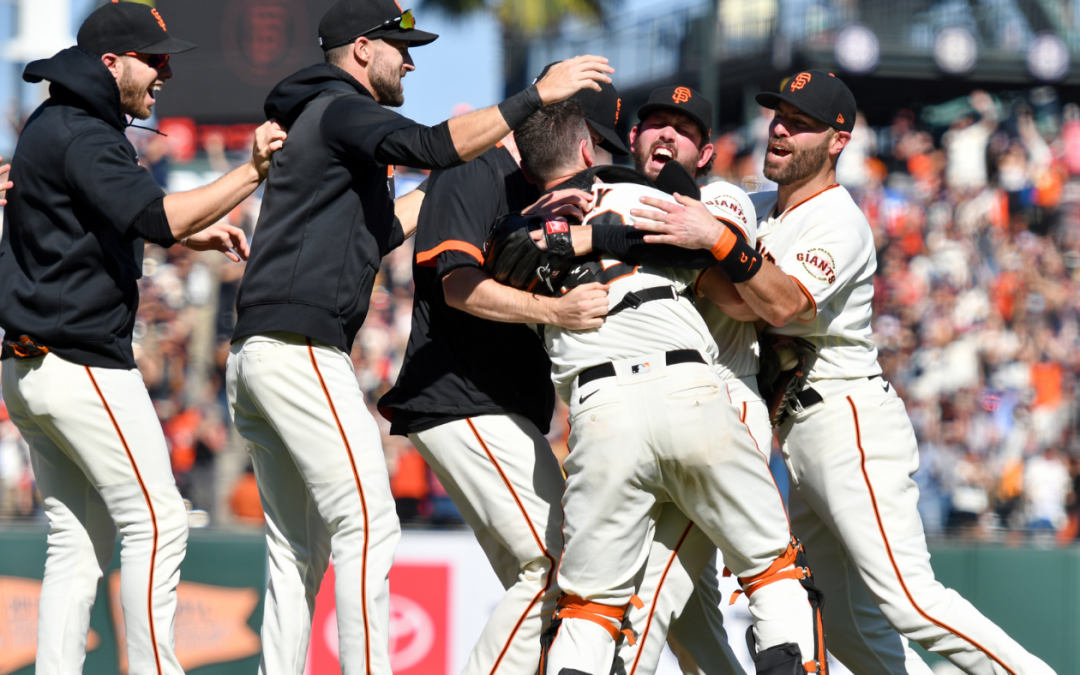 For the first time since 2012 the Giants, in this their most magical of seasons, won the National League West Division thanks to an 11-4 win over the San Diego Padres.

This divisional title may be the most meaningful in the modern Giants era for so many reasons. To begin with, the Giants were finally able to knock off the SOCAL rivals who had reeled off an incredible eight consecutive NL West titles, a feat so absurd that it seems like a typographical error. Those types of streaks are not supposed to happen in Major League Baseball. The Giants were able to keep the sinking Padres at bay in a final two weeks when the Bums would just not lose and when their final regular season opponent, the Milwaukee Brewers, decided to treat their games against the Dodgers like Spring Training contests in order to tune up for the postseason.

I hope you go down in flames, in a humiliating fashion and in a sweep at the bands of the Braves, Craig Counsell!

Amazing Wins in an Amazing Season

At the end of the day, and the season, the Giants were fortunate to have played just a bit better than their rivals and control their own destiny. We can all point to so many improbable, incredible, magical wins (The Tauchman Catch, The Non-Check Swing, The Posey Sprint to First, The Blasting of Buehler on Sunday Night Baseball)… I could go on and on. This Giants team is the definition of a team and it starts with Farhan Zaidi’s alchemical magic and goes right down to Gabe Kapler’s stewardship and the veteran leadership and superb seasons by Brandon Crawford, Buster Posey and Brandon Belt.

The Magic of Farhan

That they defeated the high-priced, high-rolling Hollywoodians makes this divisional championship all the sweeter. That the Padres disgraced their fans and their upper management with erratic, losing baseball, lifelessness and hot dog antics while sinking to a record of 79-83 when many picked them to win the World Series just goes to show you the importance of chemistry, effort, and solid all around play. It is a beautiful irony that Farhan Zaidi, a man known for the new style of baseball management that looks at the numbers and analyzes obscure figures like pitches taken in an at bat, walks, and other Analytics dogmas, constructed a team much greater than the sum of its parts. In other words, the intangibles, along with the fantastic pitching, defensive versatility, and power hitting, all played a major role in this championship for our Giants.

In the most dramatic and extraordinary pennant race in the Divisional Era, the Giants finished with 107 wins, an all-time Franchise record for both the New. York and San Francisco eras. That 107th win was especially poignant considering it came on the last day of the season and the Giants were able to survive the marathon of a 162 game season finishing one game ahead of their dreaded rivals, the Los Angelenos, who refused to lose down the stretch.

“You’re going to be hard-pressed to see another race like this for quite a while,”

This was a pennant race that no Giant fan will ever forget and the likes of which will never again be seen in Major League Baseball. Consider the following:

The day could not have been more glorious.

Logan Webb pitched seven innings allowing four runs in the biggest game of his life. His line score tells nothing about the story because Webb came up huuuuuuge from the first pitch on. He struck out the side in the top of the first to settle the butterflies in his stomach and in the bellies of the 37,000 fans at Willie Mays Field on a bright sunny day ripe for a championship. Oh, and by the way, he also hit a two-run home run to put an exclamation point on the Giants offensive outburst. His blast in the bottom of the fifth inning sent the hometown faithful into a frenzy reminiscent of the 2010 World Series.

Buster Posey had the biggest hits of the day, going 2-4 and driving in three runs, all with two outs. His first RBI single was the 1,500th of his career.

Yaz had a big two-run double. Wilmer Flores drove in two huge runs and the Giants offense exhaled after a tense game on Saturday that saw them record only five hits in a ten inning loss.

The tone of this game was set by Logan Webb with his masterful performance in the early innings and his leadership to begin the first. Webb appeared to be a man on a mission throughout the game and has now earned a reputation for being a big game pitcher (and slugger).

Dominic Leone pitched a 1-2-3 ninth to seal the deal.

“The first thing that comes to mind for me is how proud I am of this group and what they accomplished. Part of the reason that I feel that way is because I think we all knew at the beginning of the season, or even dating back to the beginning of spring training, what the projections are and what the industry sort of thought of us as a club. What I realized is there are some intangibles that those projections and viewpoints failed to take into consideration.”

Feels about 107° in here pic.twitter.com/2otJeeivCi

It took all 162, but the NL West finally belongs to the @SFGiants! #CLINCHED pic.twitter.com/S3yjn55xOY The Giants will play the winner of the Cardinals-Dodgers Wild Card Game in the Divisional Series. Game 1 will be in San Francisco on Friday.