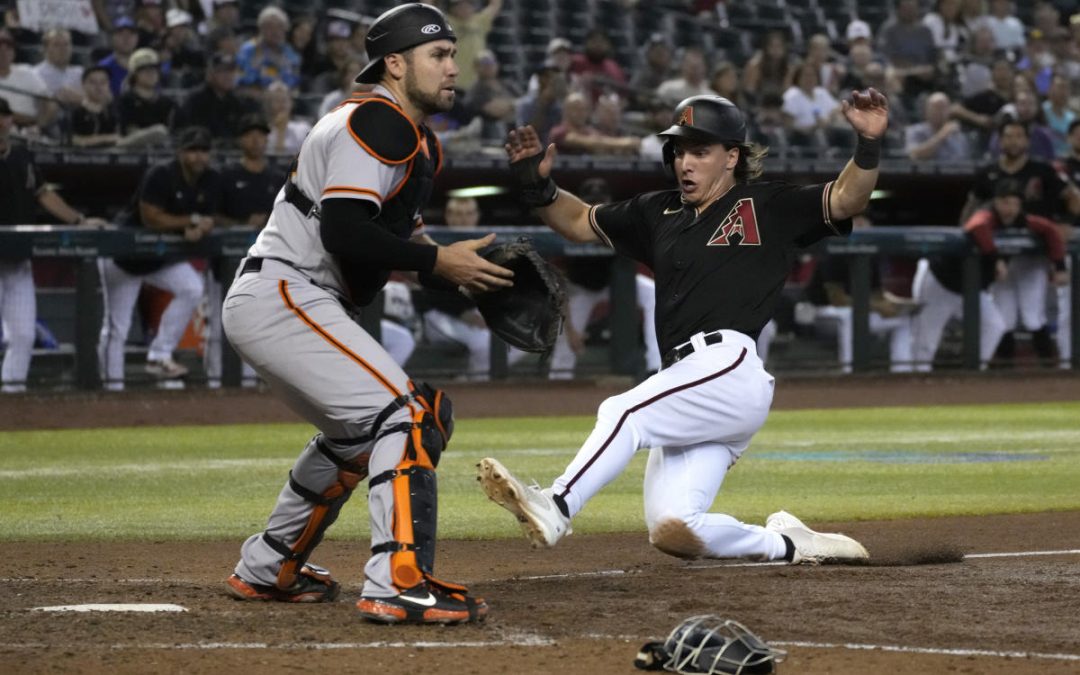 The All Star Break is Broken for the Giants

All Star Breaks are supposed to rejuvenate your team, give your veterans some rest and give new hope to young players. Well, for the Giants it has not worked out that way. Last night the boys from San Francisco lost 5-3 to the Diamondbacks and got swept for the second series in a row following the Mid-Summer Classic pause. The 5-3 loss meant the Giants have lost seven in a row with no signs of even being close to winning and are 48-50. In those six games they have not even lead for a full inning. That’s just crazy!

Prior to the All Star Break the Giants had won five of six and had appeared to turn their season into another success after a rough patch in early July and late June. Then they took 3-4 from the Brewers in San Francisco and everyone went home excited about the second half of the year.

It’s hard to believe that one year ago they won 107 games. Everybody knew the Giants were operating on some kind of invisible magic that went far beyond their baseball talent if you looked under the hood of their NL West Division Championship hot rod. Well, this year the wheels have fallen off after a promising April start.

Logan Webb’s weird day was both frustrating and eventful, compounded by a play in which the Diamondbacks scored two runs on a squeeze play in the bottom of the seventh inning.  I mean… really? In a two-batter sequence the Diamondbacks advanced a runner when Austin Slater try to throw out a runner at third base. The next batter safety squeezed a run home and when Brandon Belt’s throw sailed over the catcher, another run scored.

In fairness to Belt, the throw was not that high but he threw it with too much zip from only about 12 feet away from Austin Wynns and the Giant catcher had no time to react to it. To make matters worse, Peralta then hit a home run off Sam Long later in the inning.

You could say Logan Webb deserved better and he did. He pitched 6 1/3 innings allowing seven hits (one homer), four runs and recorded five strikeouts against one walk. Three of Webb’s runs came in on the squeeze and the homer allowed by Long.

There were consecutive doubles, one down the first base line and a ground-rule double by Marte, that eventually lead Logan Webb to flap his arms in frustration while saying to the dugout: “Why is he so far over?” It turns out the Giant ace was upset about Belt’s positioning. At least that’s the theory according to my sources. Belt later admitted he should have been playing closer to the line against the hitter with Webb throwing more changeups. It has been that kind of week for the Giants.

“I know I was out there trying to strike out everybody because I didn’t want up a run. I don’t want to lose. All those things we’re trying to do because we haven’t won in seven days. It’s pretty frustrating. Unfortunately, they’re not close games, most of them. It sucks.”

The Diamondbacks scored first in the bottom of the first when Ketel Marte went deep to right of Webb for a 1-0 Arizona lead. The Giants answered in the top of the fourth with a single to right by Esrada that saw hime inside out a fastball down the line to drive in a run. Later in the inning he stole second base and when the Diamondbacks flubbed the throw Luis Gonzalez, on third scored. It was good heads-up base-running by Luis. Just like that it was 2-1 Giants. But the Giants pitching was not able to get the shutdown inning to preserve the lead. In this case in the bottom of the fourth inning Peralta hit a ground rule double and it was 2-2.

Left-handed DBack power victimized the Giants on this day.

Then the bottom of the seventh happened and the Diamondbacks took the lead for good. The Giants answered with a run in the 8th on a single by Brandon Belt but that would be it.

Tommy LaStella played in his first game in a dog’s age, starting in left field and going 0-5.

“There’s a lot of pressing. They’re wanting to do too much and sometimes that creates a little tightness in the play.”

Let’s Talk About the Matchups Philosophy of Roster Construction

Ok, So now is a good time to look at the shortcomings of the Analytics-based roster construction matchups priority. What do I mean by that? Well, when you build a roster of players who are supposedly competent in multiple positions and who complement each other from different sides of the plate (think Tommy LaStella and Thairo Estrada for example) you are prioritizing offensive matchups over defense. In this way of building a team you have at least one right-handed batter and one left-handed batter for every position and defensive capabilities are subordinated to, “Well, he’ll be fine out there.” Now, versatility is the buzzword and the given here in this philosophy is that each player can play their position competently enough to justify the offensive-first approach. But for the Giants, the given has stopped giving.

There is no versatility when you are constantly shuffling players around the batting order, constantly pinch-hitting to the extreme (Villar for Belt???) and your defense is more porous than cheese cloth. In the Giants case, not only is their talent at question, the very way the roster is built and their game decisions are made have exposed the weaknesses of Farhan Zaidi’s matchups-based, offense-first roster building philosophy. It ain’t working. It allows for way too many balls in play and runs allowed that should be out. It also hurts morale when veterans are being replaced mid-game because your HAL-9000 computer tells you to do it.

My fear here is Giants ownership will give Zaidi too many years to keep up with “The smartest guy in the room philosophy of GM-ing” and the Giants will go nowhere as a franchise. This is his fourth season and the verdict on the draft results is mixed at best (I’m being very charitable). I see no room for optimism with this stubborn managerial and GM style combined with an organization that appears to be pinching pennies and appears to be content simply with the hope of squeezing into the postseason as a third Wild Card.

Where is Larry Baer?