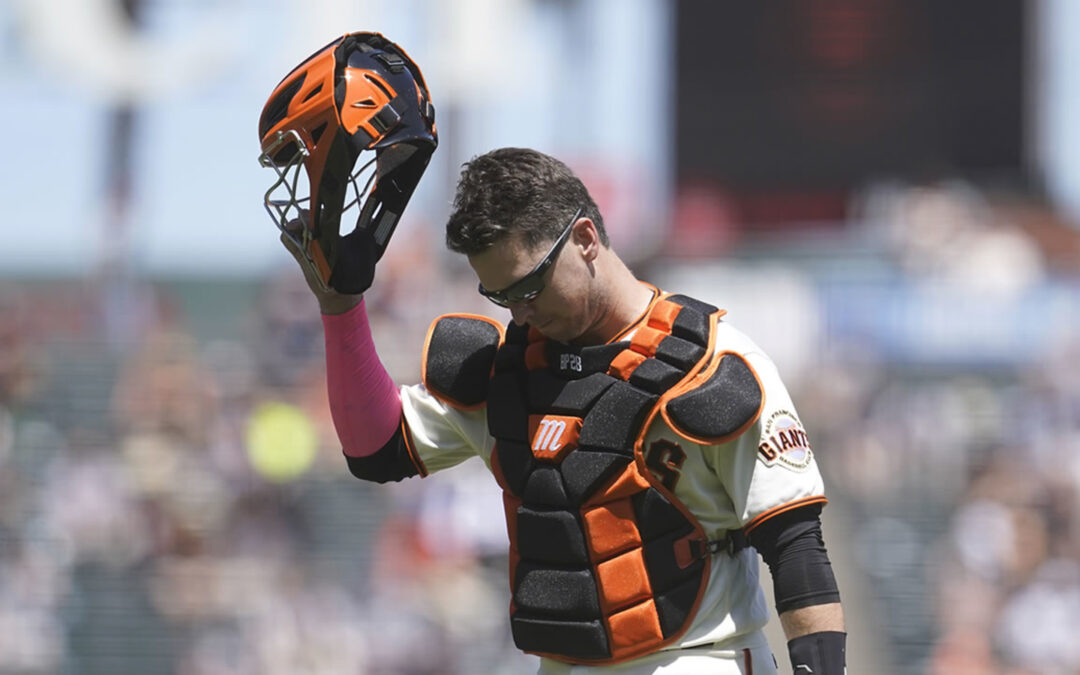 A message from Buster: pic.twitter.com/pz6Akx5UjX

The announcement of Buster Posey’s retirement is a special moment in San Francisco/New York Giants history. It is right up there with The Shot Heard ‘Round the World, Renteria’s Homer, The Catch, and The Save. I will never forget the moment I found out about it. It was yesterday morning in Milan, moments after ESPN reported the scoop from Andrew Baggarly (TWG was the first Giants Blog to report the news).

In citing the physical toll of regular pain Buster reminds us of the punishment a catcher takes.

Buster Posey is more than a baseball player. He is a special man, a special person who has chosen to prioritize his family over his baseball career. God knows he does not need the money. But what makes Buster special is his righteousness, a word too often used ironically or in some pejorative context. Buster Posey was a classy, righteous Giant and appears to be even greater in his goodness as a dad and husband.

Dear @BusterPosey, you are a rare bird.

You have what most of us MLB players never did, true perspective. You didn’t bow down & worship the game of baseball as if it were your God. In the eyes of @SFGiants fans, you walked on water but to you, it was just a game you loved to… pic.twitter.com/aPrmHrsPTu

There is no need to shed tears at this announcement. Buster is going out after one of his very best seasons and as a Divisional Champ with three rings. Buster is going home to his four children, his wife and family to live his life to the fullest and, in his words “Be a good father and husband.”

There are simply too many great moments in Buster’s career to summarize but MLB.com did a great job in this piece. You know them all. You would not be here on Together We’re Giants reading this otherwise.

Here are just some of his achievements as a ballplayer:

Do you know who Buster thanked first? It was his wife. Do you know who thanked second? His parents… That tells you all you need to know about the Greatest Catcher in San Francisco Giants History.

“You know, he’s just a baseball player. He gets it. He gets it. The game, the pitching side, everything. He was just born to play baseball.”

Why Buster Will Be in the Hall of Fame

Let me tell you why Buster Posey is headed to Cooperstown, as a first-ballot Hall-of-Famer I might add. It is actually very simple really: He is a winner. The three championships of the 2010s do not happen without Buster. Period, End of Discussion. I would make a case for Buster being the most important player in the history of the San Francisco Giants, even more so than Willie Mays and Willie McCovey, though they had greater offensive numbers. Buster’s impact on a game showed itself in every pitch, not just by how well he framed pitches but by how well he called games, by how well he threw out runners and made tags, by how well he calmed jittery relievers and wild starters, by how expertly he caught foul pops and foul tips.

Buster was a complete ballplayer. He was also a tremendous athlete (apart from below average speed). He hit for average, he hit for power, he had a great arm and he was arguably the smartest player on the field in every game he played.

There are 14 catchers currently enshrined in Cooperstown. Soon there will be 15. While Buster does not have the longevity of Fisk or the power numbers of Bench, he has the rings. But he has the defense. He has an overall WAR that does not tell the story but is the second best in MLB since 2010 after Mike Trout. He has the leadership, all of which will be factors in his election to the hallowed halls where Willie and Willie, Mel and other great Giants dwell.

A remarkable fact of the press conference above is Larry Baer’s admission that he learned so much from watching Buster play as a rookie on the way to the Giants first World Series title in 2010. Baer noted Posey’s expert handling of the pitching staff as a rookie, as a confident young baseball player despite his inexperience in the Major Leagues.

Imagine this for a moment: You are 23, it is your first season in the Bigs, your team is loaded with stars like Tim Lincecum, Matt Cain, and future stars like Madison Bumgarner, Pablo Sandoval, etc.. Your Manager is a future Hall-of-Famer and former catcher, and you are playing in the postseason after a killer divisional race you clinched on the final day of the year.

Buster did not just avail of himself well in 2010. No. He EXCELLED!

Then 2011 happened. Then Buster got steamrolled on a brutal collision and broke his body in so many places there were legitimate and expert concerns his career was over. Oh.. No big deal. He just bounced back and won the MVP in one of the greatest seasons by a catcher ever in 2012, while winning a World Series along the way.

Then Buster wins another World Series in 2014, a postseason in which Posey was clearly drained and his offensive numbers were subpar. But his defense, his guidance of the pitching staff bound together by Madison Bumgarner, Bruce Bochy, Bubble Gum, Duct Tape, and Hail Marys, and his leadership were major factors of the Championship run.

It will be interesting to see in what capacity Buster plays a role with the Giants. Both parties admitted they want to work something out so Buster is involved with the team. One of my favorite anecdotes: When Farhan Zaidi was conducting his Managerial search in 2019 he sent Buster a text in which certain elements of the press, in an effort to improve click rates, mentioned Buster as a long shot candidate. Buster responded: “I would be a better Manager than half of those other guys listed.”