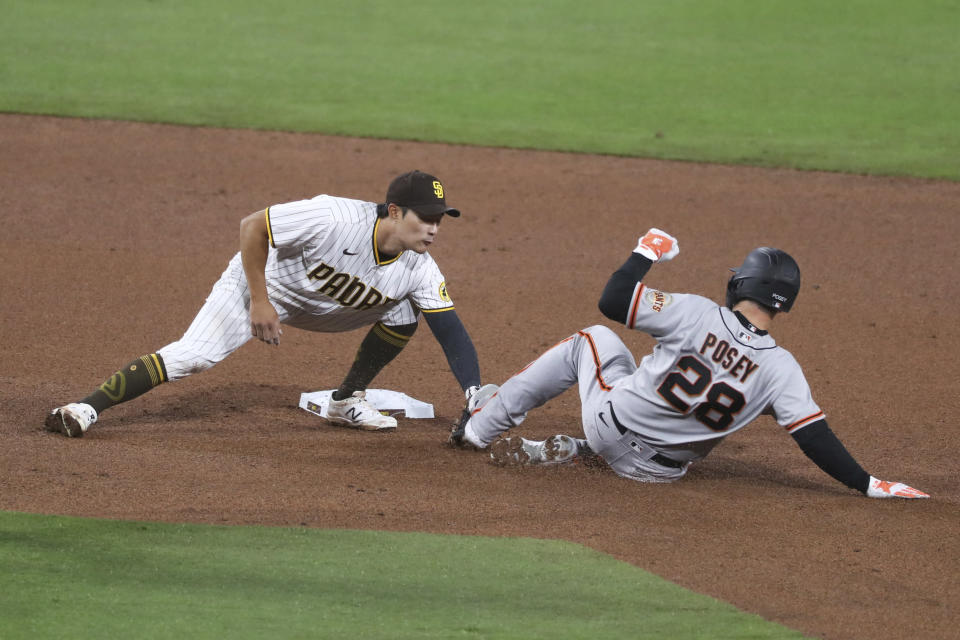 Sometimes when I see a pitcher ON, I mean really dealing and taking control of a game I wonder why said hurler ever loses a game. The answer, as we all know, is that consistency is what separates an ace from a mediocre pitcher. Yu Darvish’s career thus far has been decidedly mediocre. His ups and downs have been way up and way down with teams like the Rangers, The Dodgers and The Cubs. In last night’s game Darvish was simply dominant. His fastball was hard and accurate hitting 94-95 consistently. Darvish is the type of pitcher who appears to throw a heavy ball, the kind that induces weak contact and that has enough movement to avoid wooden sweet spots on baseball bats. His slider was nearly as hard as his fastball and very well disguised with the sneaky slow-fast delivery. His command was excellent and despite BCraw’s homer the Giants were mostly over-matched facing the Padres’ number 3 or 4 starter! To think the Padres have Blake Snell going tonight makes you realize this San Diego team is built to win it all if they stay healthy.

Sure Matt Wisler gave up the two-run homer in the 7th in a 1-1 game but the story of last night’s contest was Darvish. For the Giants, a consolation is Aaron Sanchez, who pitched five innings allowing only one run on six hits with four strikeouts and zero walks. It was an auspicious debut to Mr. Sanchez’s 2021 campaign and right now, through the first turn of the rotation the Giants starters have all gone at least five innings and have kept their team in the game by posting a 2.93 ERA. The Giants should be 3-2 but that’s another story.

Here is the Crawford homer:

Kevin Gausman makes his second start of the year against Blake Snell. First pitch is at 1:10 PM, Dave winfield time.