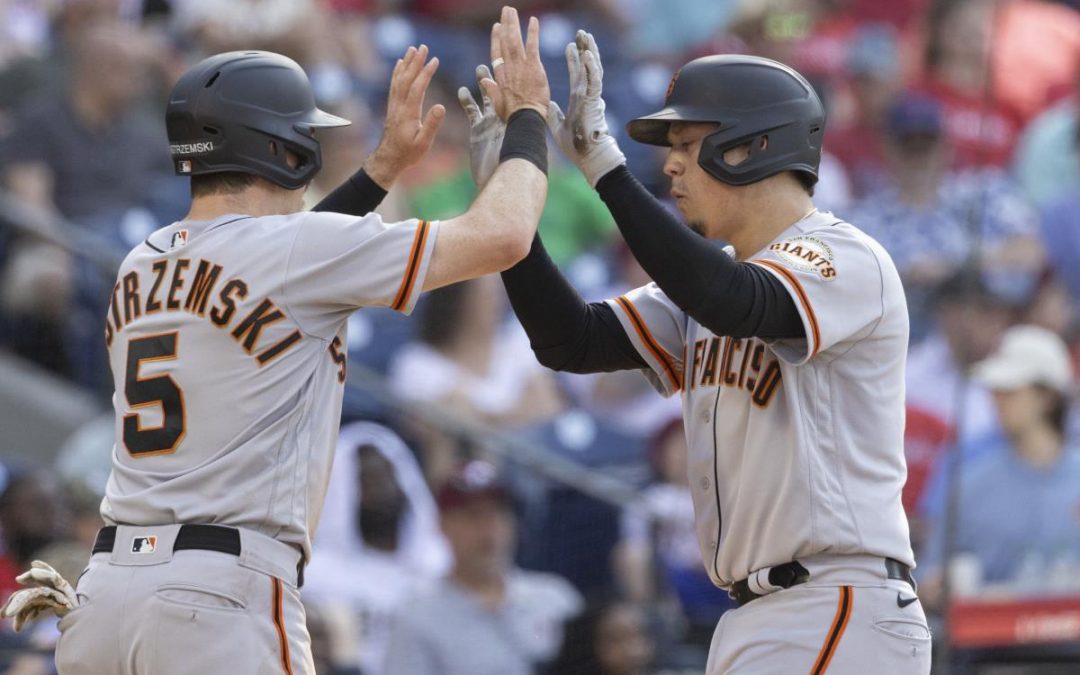 Jarlin Garcia’s Streak Is Over

You may notice in my recaps that I rarely mention. middle relievers, unless that is to say they had a bad game. Well, last night, Jarlin Garcia entered the game with a franchise record-tying scoreless streak of seventeen straight appearances (Joe Nathan also did it). He has been superb this year and was mostly excellent last year. Garcia is the type of pitcher who often gets overshadowed in the Giants bullpen by guys like Camillo Doval and Jake McGee. But he is no less important. He is the 2022 Javy Lopez who also can get the occasional righty out.

Last night, after a five-run top of the sixth that saw the Giants take a 5-2 lead and be in a great position for a series sweep of the Phillies, Garcia had a hiccup. He allowed five runs, with two homers. It was a weird, horribly freakish appearance and I do not expect it to happen again ever. That’s baseball. Manager Gabe Kapler said that Garcia’s slider did not appear to have its usual zip and that was all she wrote for the Giants as they were held scoreless through the final three innings in the 6-5 loss. It was a weird game indeed.

In fact, the story of the game for my money is that the Giants were held to five hits for the night. That they managed to score five runs is impressive but other than that sixth, it was a quiet, very quiet night for the lumber.

The Giants were down 2-0 and Aaron Nola was cruising until the top of the sixth. Donovan Walton and Jason Vosler doubled to start the frame and get the boys on the scoreboard. Then Tommy LaStella singled before Nola hit Yaz with a pitch. That set the stage for a three-run bomb off the bat of Wilmer Flores, who suddenly finds himself very hot. He must love the cheesesteaks.

Can I get an amen? 🙌 pic.twitter.com/PrFgK4iMOs

The five-run inning gave the Giants a 5-2 lead until the bottom of the sixth. It was that kind of day.

Carlos Rodon pitched another solid game and failed to get the win. The story of his outing (two runs, one earned on six strikeouts, six hits and one walk) is that he trew 98 pitches in five innings. That’s too many and hence it was another five and dive outing by the Giants starters.

The second Phillies run scored on a bunt RBI single after a stolen base and a throwing error by Wilmer Flores put Herrera on third. That was a big run in the ballgame.

But since Wilmer drove in three his plus/minus rating is still a +2 so we will cut him some slack. He’s a great Giant.

Once again the infield defense pays for the absence of Brandon Belt.

One night after being pulled with right shoulder tightness Longoria made a pinch hit appearance in the eighth inning. He struck out.

The Giants made some roster moves prior to last night’s game:

The #SFGiants made the following roster moves prior to today’s game:

So, I neglected to mention that after a pretty rough stretch, the Giants finished the month of May at 13-13 to bounce back to .500. Now, on this road trip (Cincy, Philly and Miami) the Giants are currently 3-3, which, quite frankly is not good enough against two very bad teams. With the loss last night the Giants are now 27-22, still 5.5 games behind the Bums who also lost. The Cardinals have a better record than the Giants right now. Considering the nagging injuries to Belt, Longoria and Wade, and considering the under-performing pitching staff, a 27-22 record is not the end of the world but it looks like the Giants are at best, a third-place team in this tough NL West. It’s just the cold hard reality. Now, we have not played fifty games yet so much can change but unless we get better pitching from the middle relief and most of the starters and unless the defense in the infield and outfield suddenly improves to elite levels like the previous seasons it looks like the Giants have many weaknesses.

The Giants travel to Miami four a four game series that begins tonight. It will be Alex Wood against Sandy Alcantara. Game time is 6:40 PM, Flipper time