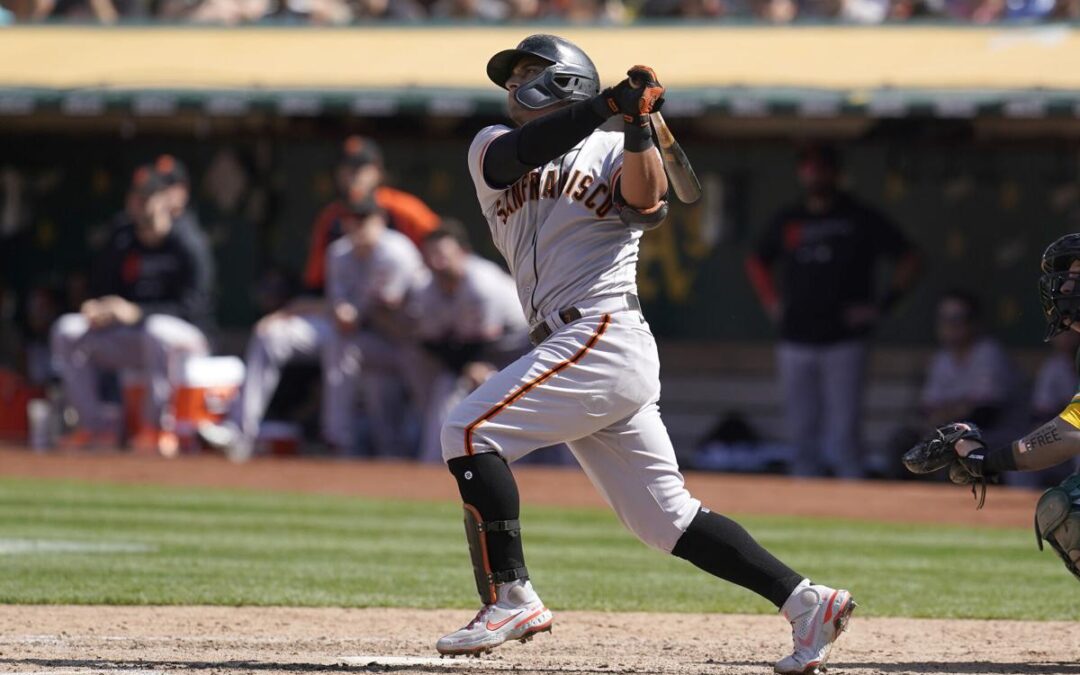 For the second straight game the Giants beat the Oakland Athletics on a pinch-hit homer late in the game to grab a victory when a bitter, devastating loss seemed imminent. This time it was Donovan Solano who was the hero with a pinch-hit two-run zinger in the left field bleachers on a slider on the inside corner that may have been the second-most important swing of the bat of this magical 2021 season. It gave the Giants a 2-1 lead with two outs in the top of the 8th on a day that saw them steamrolled by Oakland starting pitcher Frankie Montas who allowed only two singles to the San Franciscans in his seven innings of work. The blast came on the first pitch Solano saw and he knew it off the bat.

The bomb by Solano came of A.J. Puk and it set a Major League record. Prior to this game, no team ever had pinch-hit game-winning homers when behind on consecutive days in the eighth inning or later (Too many qualifiers, I know but it is still pretty damn cool!) WOW! The winning  hit was set up by a two-out pinch-hit walk by Austin Slater. Talk about role players! Talk about situational dramatics!

The win gave the Giants a 2.5 game lead over the Dodgers as the Mets finally did something right and beat the Hollywoodians. The Giants are now a whopping 80-44, the first team to reach the 80 win mark in MLB this season and only 20 wins away from the magical century mark with 38 games to play.

Logan Webb had another very strong start going six innings and allowing one run on five hits and one walk. He was mostly dominant and he was able to make sure the lone run driven in by Mark Canha on a single in the bottom of the sixth would be the only run he would allow. Webb would lower his ERA to 2.84. After this start I think it is fair whisper “Ace” after reciting “Logan” and “Webb.”

This was an especially gratifying win because it gave the Giants the covered Bridge Trophy as they took four of six games against their East Bay Rivals on a weekend that saw Starling Marte and Josh Harrison (both ex-Pirates) dominate and end up on base with key hits in practically every one of their at bats. It was annoying.

The Giants had a total of four hits in the ballgame and the truth is were it not for the Solano smack it would have been a desultory loss for our boys, despite the fact that the whole series had a playoff intensity to it and each pitch felt critical to the fortunes of each team.

Tyler Rogers pitched a scoreless eighth and Jake McGee pitched a shutout in the ninth to preserve the victory. The final out in the game came when Chad Pinder struck out swinging on three straight fastballs up and away in the zone. Buster Posey noticed the hole in Pinder’s swing with regard to the heaters and he kept calling them to record the out. This is the definition of a great catcher. An experienced catcher or pitcher can tell how far off a hitter is when he swings and misses and Pinder was not close. Credit to McGee for spotting his very lively fastball to get the save.

Evan Longoria was placed on the Injured List after receiving a Covid-19 vaccine booster shot. There is no word on how long he will be missing but he is indeed missed in the Giants line up. OK. Normally I simply do not have the time to write a complete wrap about the weekend games but I will make an exception for Saturday’s epic 6-5 win. LaMonte Wade Jr. had what I will go out on a limb and call the most important swing of the bat for a Giant this season so far with his pinch-hit monster shot down the right field line that gave the Giants an exhilarating win when they were behind 5-4 in a game that was notable for many reasons including the many frustrations and bad breaks that went against our beloved San Francisco baseballers.

Here is the scenario if Wade does not hit his homer and the Giants lose that game: The Dodgers were on fire, the Giants were on their way to losing a third-straight game and seeing their division lead dwindle to 1/2 game. Needless to say things did not look good when after Kevin Gausman exited after 3 2/3 innings allowing five runs, two earned and six hits with one walk and five strikeouts. Let me say this loud and clear: Kevin Gausman was fantastic on this day. His fastball was hitting 97 routinely and the big righty was able to spot it up and down the zone, in and out on hitters from both sides of the plate. He breezed through the second inning on nine pitches and looked like he was going to go eight innings and simply desecrate the A’s batters. It did not work out that way because something changed in the third and the fourth. All of a sudden the A’s were getting hits on the splitter and fouling off fastball after fastball in two-strike counts. Judging by the body language and reaction time of the Oakland batters it appeared to me that they knew what pitch was coming in every instance from the third on. If I am the Giants coaching staff I study video of that game very carefully to see if the A’s are cheating or if they are somehow able to steal the catcher signs or Gausman’s intent with his pitches in the wind up. Something is not right.

The three earned runs came off an error by Wilmer Flores at third base (Wherefore art thou Evan Longoria?). Two runs scored on a duck snort on the end of an Athletic bat. It was getting ugly because the three-spot the Athletics scored in the first were not earned and it put the Giants in a mental hole as much as a scoring deficit. The Giants answered with two in the top of the second thanks to a homer with a man on by Kris Bryant to make the game a bit more scintillating. The Athletics would score lone runs to respond and cruise to what appeared to be a 5-2 win until Brandon Belt and Darrin Ruf hit back to back home runs in the top of the seventh inning to make it a 5-4 game. The large Oakland crowd started to get antsy and all of a sudden the game was taking on the personality of a 1970s conspiracy thriller. The intrigue reached its culmination in the top of the ninth with one out and one on:

The Giants traveled to New York yesterday to play the Mets in a three-game series that begins tomorrow.
This has been your weekend wrap!