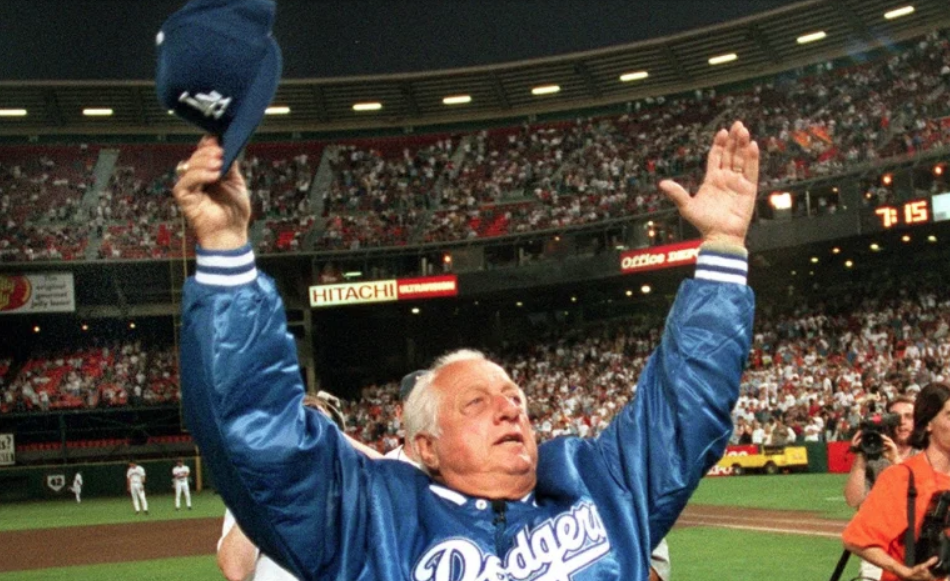 Ok, so this is not exactly the post one might expect from Together We’re Giants (or maybe it is?). Tommy Lasorda was more than just the Manager of the dreaded Dodgers. He was the rare baseball personality who transcended the game and became famous outside the ballpark, for all the right reasons. He was one of baseball’s best ambassadors. He was one of the greatest Managers in the history of the Dodgers and Major League Baseball.

I read with sadness of his passing last week as I recalled his “larger-than-baseball” persona that was always a mix of Italian bon vivant and old-school ballplayer with a smidgen of curmudgeonly old wisdom thrown in. In other words, even if you were an Expos or a Giants or a Padres fan it was hard not to like Tommy Lasorda.

As a kid growing up in Montreal and a diehard Expos fan Tommy Lasorda’s Dodgers gave me many a heartache. Nothing could compare to the sublime pain of losing a decisive game 5 (best of 3) NLCS in 1981 in Extra Innings on a Rick Monday homer off Steve Rogers (the Expos Ace). That’s what the Expos did against the Dodgers, who in 1981 finally beat the Yankees in a World Series a week later.

Tommy Lasorda had Youppi, the Expos mascot, thrown out of a game. The only time in Major League Baseball history a mascot was ever ejected.

Lasorda gave us many Giant memories too.

Here is a great one told by Krukow and Kuiper on many an occasion:
“He’s walking down the foul line and blowing kisses and taking off his hat, and he turns and he does a 360, and he has his Dodgers jacket on, and in white letters, it had his name — only they misspelled it,” Krukow said. “It said ‘Lasodra.’ As the whole stadium became aware of this, he was the only guy who didn’t know what was going on.

“The elevation of applause and laughter and the response just soared. He walked by us, and he had no idea. I think fate got him that night.”

We are saddened to hear of the passing of @Dodgers legend and Hall of Famer Tommy Lasorda. Tommy was one of baseball’s greatest ambassadors and truly loved the game and the people in it. https://t.co/IrgVk7lgh3

Lasorda was always the villain for the Giants and their fans. Of course he was, he was the Dodger Manager and an LA celebrity who appeared on television shows and movies on many occasions. But he was a lovable villain. There was not much that was mean about him. He never met a camera he did not like but he also nurtured many great ballplayers and was a role model to many others, even after they played with the Dodgers. That’s the type of guy he was.