Return of the Brandons 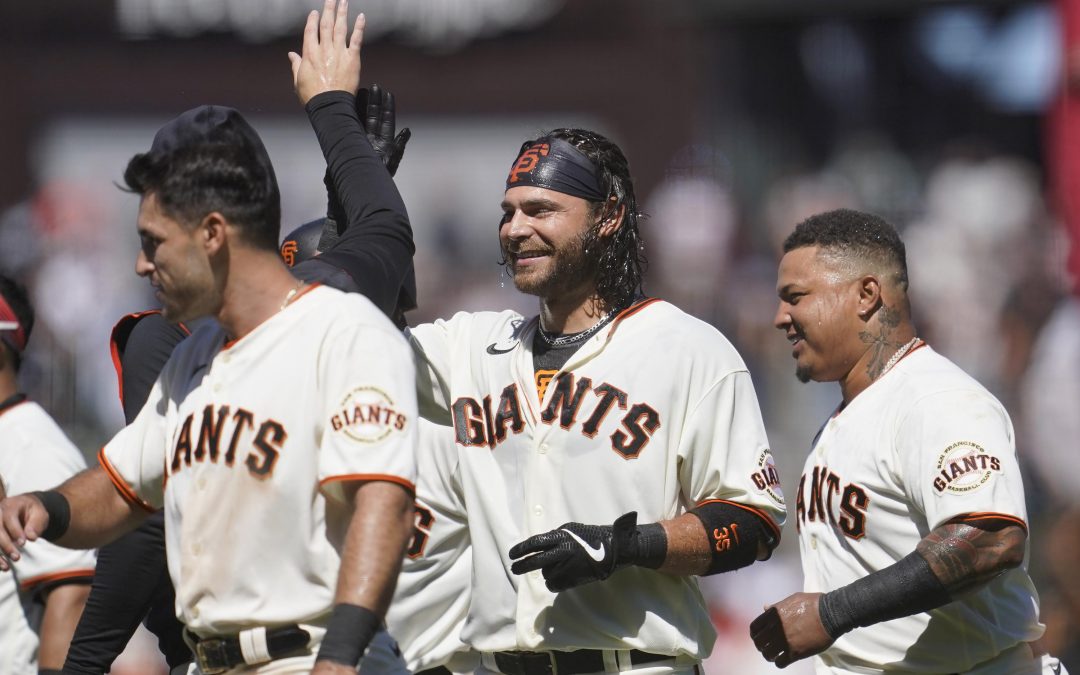 As the Giants came to bat in the bottom of the seventh inning last night, coincidentally the moment where I tuned into the game, they were being shutout on one hit by Zak Gallen and his tailing fastball. Gallen was throwing at least three different versions of a fastball that had more movement than Charo in the 1970s. He was absolutely dominant. The Giants never threatened in the game before the seventh inning and the ballpark felt like a cross between a mortuary and meditation room. It was quiet.

The Brandons Power the Comeback

Austin Slater put up would I would consider one of the key at bats of the game to lead off that important inning. He fouled off a number of very difficult pitches on 1-2 and 2-2 counts to line out to short. He saw 10 pitches in the at bat and wore down Gallen a bit. Then Brandon Belt came to bat and hit a monster homer just over the fence in Triples Alley and into the Diamondbacks bullpen. Suddenly and emphatically the game is now 3-1 and the Giants have life. The crowd awakens and the home team is getting its mojo back. Gallen looks vulnerable.

Thairo Estrada then followed with a single to right before Yaz hit a hustle double to right center. Estrada should have been sent on the play but the Giants played it safe. The situation: one out, runners on second and third and one base hit away from a tie game. David Villar followed by flying deep to right on a curveball, the first pitch he saw in the at bat. He was a bit over-anxious and probably should have laid off the pitch but never the less Estrada was able to score on the sacrifice fly and it was 3-2. Brandon Crawford would then follow with a strikeout in a critical situation against Mantiply after he was brought in, one or two batters too late, to replace Gallen. With the strike out Crawford’s batting average took a trip close to his weight.

Without a doubt the biggest disappointment this year has been Brandon Crawford. His batting average of .218 and his home run total of 5 have been disappointments. You could make the case also that his defense is not as sharp as last year’s. At any rate, he is not playing anywhere near his 2021 MVP-level campaign. Well, last night he drove in the winning run with the bases load and one out in the bottom of the tenth when he hit. a laserbeam to the right fielder that was not fielded. It would not have mattered as it was hit deep enough to score a run on a sacrifice fly. Ball game. Jubilation.

“I think momentum can definitely go both ways, and hopefully we can take this momentum and turn it into some more wins going forward.”

Guess who surrendered the game-winner? None other than #notforevergiant Mark Melancon.

The Giants were able to tie the game on a home run by Wilmer Flores, the hottest-hitting Giant, along with Thairo Estrada, at the moment. Flores golfed a 1-2 curve ball from Mantiply and destroyed it. The home run carried deep into the left field seats and was a no-doubter. Watch the hit and watch Flores’s reaction immediately after: head down, do your trot, act like you’ve been there before.

Bravo Flores, you are a class act and a mighty Giant slugger. The homer was Flores’s 13th. He now has 50 runs driven in on the season and is putting together a very good offensive year.

I have confirmation from my sources that Gabe Kapler is a big fan of Together We’re Giants. In fact, if you want proof, look no further than yesterday’s game where Kapler let Thairo Estrada play a full game against a right handed starting pitcher. Miracle of Miracles. Why do I mention this? Because Dr. Lefty, Johnny Black and I have all been clamoring to let certain key Giants play against the traditional matchup logic and stop the platooning when there is an obvious downgrade in talent. Players like Estrada, Flores and Slater need to bat everyday against anyone since they are the three most productive Giant hitters at the moment. Ditto for Pederson, always a long ball threat.

It seems our friendly advice finally got through to the Giants Manager because in addition to Estrada, Austin Slater started in center field, though he was pinch hit for by Luis Gonzalez later in the game.

Once again the Giants decided to go with a relief pitcher game throughout. John Brebbia pitched the first allowing one hit and zero runs but Sam Long ran into some trouble as his pitches ran into some Diamondback bats. Arizona scored three runs off him in 1 2/3 innings of work including a triple by Varsho off the wall in Right that would have been a homer in any other park and a home run to center by Marte that would not stop carrying. Long was hittable on this day but the rest of the relief corps did its job by shutting down this pesky Arizona team. Rogers, Garcia, Llovera and Doval would all pitch shutouts from innings 4 through 10.