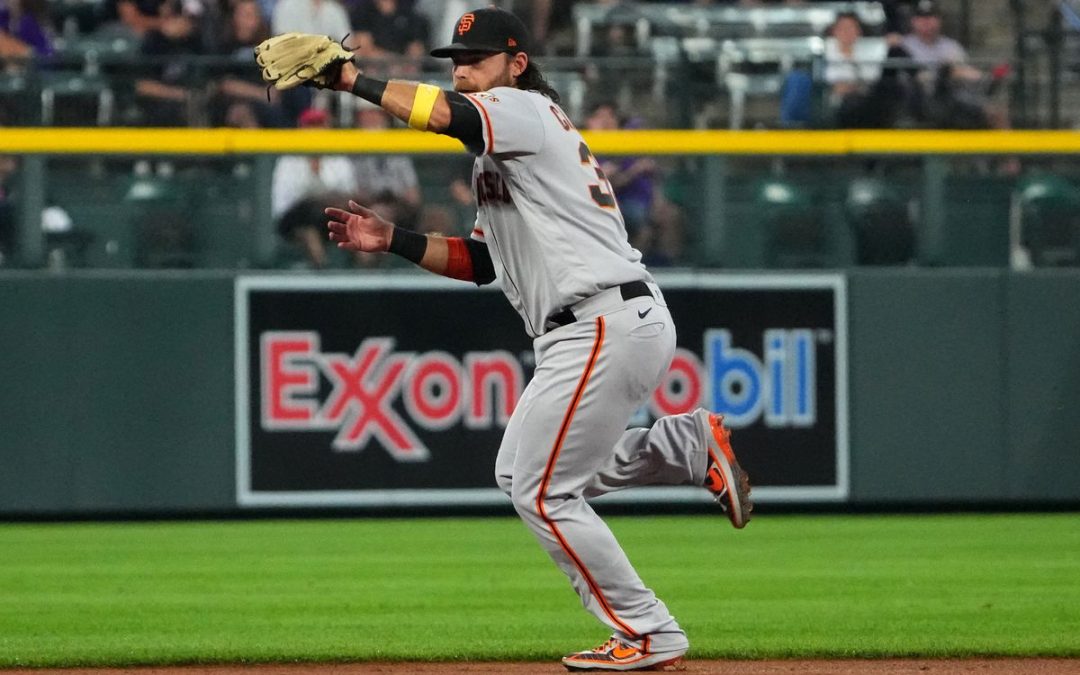 Ok, so the Giants are having a disappointing 2022. We all know this. We are past the stage of denial, past anger. Now we’re in acceptance mode. Well, the Giants just finished off an impressive four-game sweep in Denver against the Rockies to make us all feel a bit better. Yesterday the boys won 3-0 in a classic low-scoring game that had sensational defense by Brandon Crawford and Mike Yaz as well as big two-out RBI hits by Joc Pederson and LaMonte Wade Jr.

When I saw the replay of Crawford’s diving stop of a hard smash in the hole with nobody out in the bottom of the 8th inning with a runner on first and the Giants leading 2-0 I thought, well, it was amazing but he will never throw anybody out. Wrong! The Giant veteran shortstop sprang to his feet like a 21 years-young rookie and snapped a quick throw to second to just beat the runner and record one of the most amazing outs you will ever see. I literally screamed “Oh my God!” here at home watching that play. It was just fabulous. It snuffed out a Rockies rally.

You can take your defensive metrics and Crawford-hate and stick them where the leather don’t shine, Analytics Bastards!

The Giants scored in the top of the first inning with Yaz on first when Joc lined a two-out single to center. In low-scoring games, in road games and in the postseason, scoring first is Biiiiig. Pederson had three hits in the game is now hitting .268. He has driven in 66 for the season, both numbers are more than respectable when you consider the platooning and the lefty’s power. Pederson would make a great lefty complement if the Giants could snag a big bopper from the right side for their DH next year. I am dreaming of guys like J. D. Martinez or Nick Castellanos, players who may be available this offseason for a variety of reasons.

Throw in a Trea Turner and a front line starter and you may see a Giants team in the postseason next year. But I’m dreaming big and we shall see what kind of offseason Farhan Zaidi goes for.

Here is the Pederson single.

Yaz hit a beautiful homer in the top of the sixth.

Interestingly for a very low-scoring game at Coors Field there were twenty hits in the game, ten for each team. The Giants escaped a bases-loaded jam in the bottom of the second inning when Tyler Rogers induced a double-play to end the inning. Speaking of Mr. Rogers, his neighborhood is much more beautiful lately as his numbers the past month have been very good. In fact, for the better part of the second half Tyler Rogers has been pitching like his 2021 self. This is a good sign as it appears he will be part of the pen in 2023 and beyond.

Ok, so for two games in this series the Giants went with a bullpen effort that saw relievers start and finish the games. In yesterday’s win the crew of Brebbia, Rogers, Garcia, Cotton, Alexander, and Doval recorded a 10-hit shutout at Coors. You don’t see that very often. If you’re keeping score at home that’s six pitchers, not a philosophy I agree with because of the wear and tear on the bullpen but until MLB reigns in the stupidity of fake injuries and roster manipulation, this is what we get. It worked yesterday for the Giants.

The Giants brought up right-hander Shelby Miller from Triple-A Sacramento and optioned right-hander Cole Waites to Sacto. Yes, that Shelby Miller who at one point appeared destined for superstardom till his career derailed in Arizona and Atlanta. Maybe the Giants fixed him. Stranger things have happened.