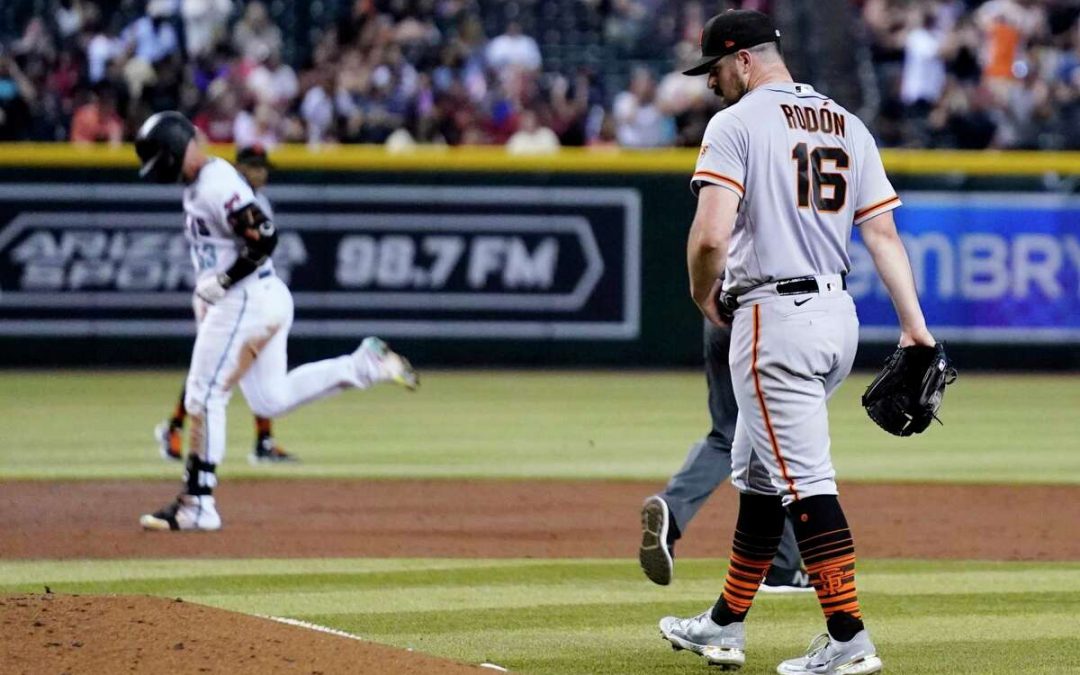 In the process of the Giants losing their sixth straight game, 7-3 to the Diamondbacks in Phoenix, Carlos Rodon had a night he will never forget, for the wrong reasons. He lost his start. He kicked a bat in frustration while in the dugout and ended up striking Thario Estrada in the process. He also kicked a hard smash grounder right into his glove for one of the weirdest and most amazing plays you will ever see a pitcher make.

To his credit the Giant lefty apologized to his teammates and to the media after the game:

“Unacceptable action. I hit my teammate, the nicest teammate on the team. Just a selfish action, and it just cannot happen. Stupid.”

Here is Kapler on the incident:

“You saw that right away. Carlos feels terrible, he knows it’s unacceptable. These are his teammates and if he’s not able to maintain control, somebody can get hurt. … We’re going to work on ways for him to be in control in those situations..”

While it’s never ok to abuse bats and hit teammates, unintentionally or not, Rodon’s frustration came within the context of the Giants desperately needing their Ace number 2 to be a stopper and put an end to the worst losing streak of the season. It did not happen. Rodon gave up five runs in six innings on only three hits but it was two homers after walks and a hit batsman that did him in. He still managed to record ten strikeouts so his effectiveness was there. It’s just those two homers… they were the story of the game.

The Diamondbacks added two in the bottom of the eight when Marte allowed an RBI double and RBI triple. The Giants had closed the gap in the top of the sixth inning when Brandon Belt doubled in Wilmer Flores for a run.

Here is Wilmer’s homer, on a hanging curve:

So, Giants Manager Gabe Kapler said a few things that the Diamondbacks used as motivational material:

After being swept in LA, Giants manager Gabe Kapler said they would “get it right” when they got to Arizona.

Josh Rojas said he and his teammates “didn’t take that well.” They responded with their play last night and have continued it into tonight. pic.twitter.com/4BL1nkW5Xr

The Numbers Are Ugly

Since the All-Star break, the Giants have allowed 39 runs — 28 of them with two outs, including five on Tuesday.

The #SFGiants made the following roster moves:

Tommy LaStella was reinstated from the Covid Lost. He is appeared on the field in only seven games this season and Gabe Kapler has explained that the Giants need him to play second base to take the stress off other players and rotate the DH spot.

Joey Bart was removed from the game after three at bats because of some kind of illness.

Where Do the Giants Go from Here?

The Giants are in a bad way now, to state the obvious but after 97 games their season is not over. The trade deadline is looming, four days away. It will be an important day for the Giants as an organization. If Farhan Zaidi sells it is a sign to the team that he does not believe in their postseason chances. If he buys it means he will have to give up some significant pieces of the farm system. If he stands pat it means he is ok with the status quo. The only logical and realistic option, as I see it, is to sell high on Pederson, Flores, and maybe Rodon. Otherwise, the Giants ownership is in dreamland if they think this team has what it takes to get to the World Series or the NLCS as constructed.

There is another scenario: The Giants sell and still contend, surprising everyone and making it to October, showing perhaps that what they needed was some new chemistry. Maybe a Ramos or a Villar gets hot and maybe a young arm and new acquisition helps them. I have seen it happen before.

The finale of the three-game series is tonight at 6:40 PM. it’s Webb vs Gallen. The Giants need Logan to be Logan.