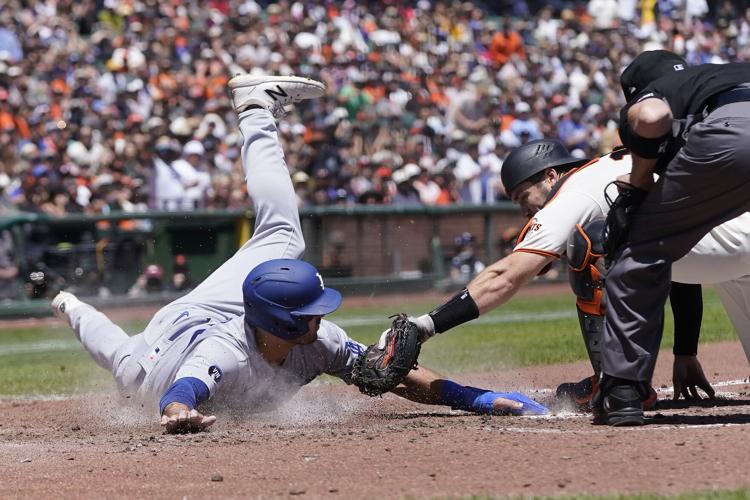 The Bottom Is Getting Rockier

The Giants lost 55 games all of last season.

For the 2022 season they lost their 55th game yesterday. It was August 4th!

This is as bad as it gets, Giants fans. The Dodgers swept our boys in a four-game series on our own turf, in front of our own fans. Yesterday’s 5-3 loss was exhibit A in the talent deficit between the two teams. Mookie Betts hit a clutch three-run homer and Trea Turner hit a solo shot. Gavin Lux was a thorn in the side of the Giants all day long and that’s all she wrote.

I could report a lot more about the game but I am a bit too depressed to get into all the details like Brandon Belt scoring on a wild pitch in the ninth off Craig Kimbrel to make things interesting until Tommy LaStella struck out to end the game.

The Giants are now 51-55, five games ahead of the last place Rockies and sinking like a stone. The Dodgers are now 72-33 and have the best record in the Bigs. My, oh My 2021 sure feels like eons ago, a beautiful dream that actually happened.

J. D. Davis hit an opposite field two-run homer on a high fastball off the outside corner in the bottom of the seventh inning. Clayton Kershaw was stunned and the Giants had a brief 2-1 lead until Mookie Betts hit his three-run bomb to left. Davis showed serious power on the homer.

The Giants also threw out a runner at home on a nice relay throw from Wilmer Flores and tag by Austin Wynns.

Clayton Kershaw left the game warming up for the bottom of the fifth inning with what appeared to be back pain.

J.D. woke up on the oppo side of bed this morning pic.twitter.com/VvnYDEssyU

This was the first time the Bums swept the Giants in San Francisco in a four-game series since the bad old days of 1977. Here is what the Giants roster looked like in 1977. The leading hitter on the team was Bill Madlock. Remember him? I do. Remember when the Giants played the Dodgers as if was Ali-Frazier, two heavyweights going toe-to-toe with each trading body blows? Yeah, it feels like it has been a while but it was actually 2021, or last season.

And now the Giants have lost eight street to the Bums, and eleven straight to the NL West, a franchise record.

The Dodgers have won 8 straight games against the Giants, tied for the longest win streak by either team in the rivalry since they both moved to California in 1958.

All 8 wins have come by multiple runs. pic.twitter.com/9t1H7jc8yj

Jarlin Garcia and Gabe Kapler were thrown out of the game after the top of the sixth inning when Garcia struck out Outman to end the inning. Garcia made a few gesticulations of fury and celebrations, evidently mimicking the Dodgers celebratory movements. The umpires had issued warnings and Kapler came out to defend his pitcher. Both were ejected. Here’s Jarlin’s explanation:

“He did that (gesture) against me the other day when he hit a home run, and I just thought, you know what, let me do the same thing,” García said through a translator. “It wasn’t trying to be disrespectful with anyone. I mean, not even Mookie Betts. He’s one of my favorite players. I respect all of them, especially him. But it’s just getting caught up in the moment, trying to compete.”

Hmmm. when you are losing the game and about to swept at home in a four-game series, something tells me it is best not to make silly gestures, even if they are a form of mockery.

A fiery Gabe Kapler was ejected following Jarlin García’s exchange with Mookie Betts to end the top of the sixth inning 😮 pic.twitter.com/nTdngYWJCw

Joey Bart had the game off and was dealing with a tight groin. Brandon Crawford and Evan Longoria are only days away from rejoining the Giants. Maybe a 15-game winning streak is on the horizon?

The Heart and Hustle Award

Evidently The Major League Baseball Player’s Association has an award called “The Heart and Hustle Award“. Each team gets a winner. This year Wilmer won it for the Giants and Trea Turner, one of the top five best players in baseball, won it for the Los Angeles Hollywooders.

Somehow Major League Baseball decided the Giants should be off on a Friday so they do not play today. The Giants travel across the Bay Bridge to play two against the Athletics on Saturday and Sunday. No baseball on a Friday is just wrong. I mean, really Wrong!