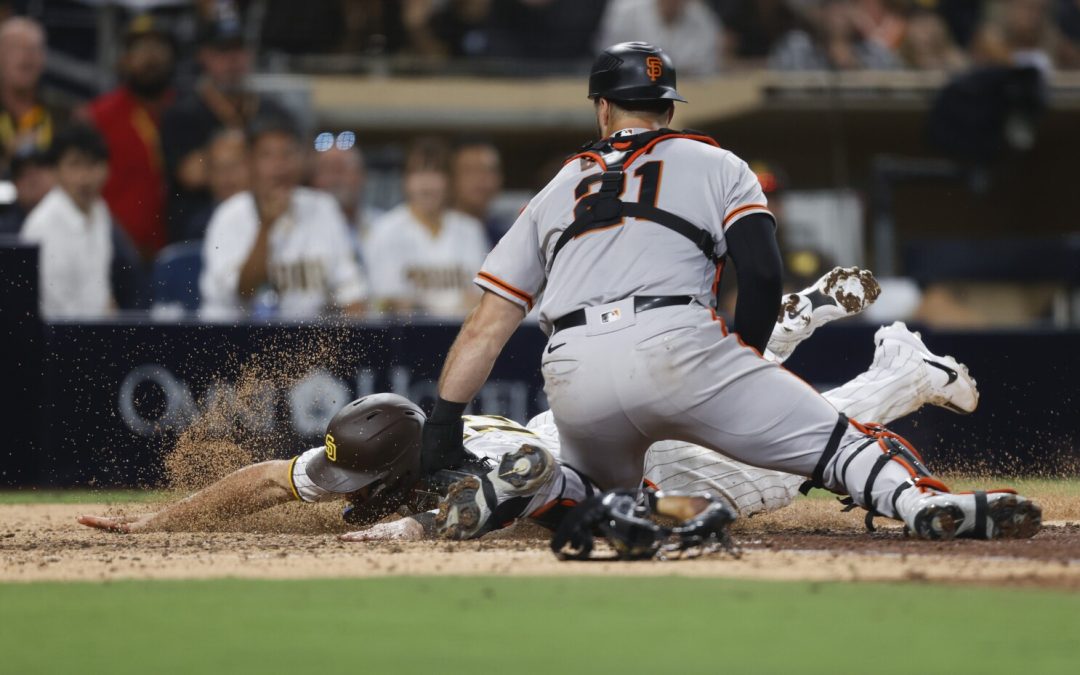 “It looks like we won tonight’s game with some defense.”

WOW! What a play at the plate. A fantastic throw by Brandon Crawford on a relay and an even more impressive scoop and tag by Joey Bart was what it took to preserve the shutout in the bottom of the seventh with the Giants clinging to a 1-0 lead. The play was a double hit by Kim Haseong with Brandon Drury chugging home, trying to score from first base. Bart’s part of the play was the most difficult and most dramatic. Initially the ump ruled Drury safe but the call was overturned on review because it was ruled that Bart’s tag was applied as Drury’s hand was above the plate but not touching it. It was literally a question of an inch or two. That’s what decided the play and the game. Seeing the play twice  at full speed I would have ruled the runner safe as well. The Giants were very fortunate that the gods of replay review in New York were smiling on this night in their favor.

“What a pick by Joey. They don’t get any better than that. That was a sick relay. Gonzo hustled to make a play in the corner, Craw made a pretty good throw and Joey made just an unbelievable pick to save the game.”

“Bart made one of the best picks and tags I think I’ve seen from a catcher. That was a great play from him. Luis (Gonzalez) gave me a great throw, right to my chest. There were a lot of good parts to that play.”

“First thing you look at is how well Gonz played it off the wall. He was perfectly positioned to get a good throw off. Craw’s feet were excellent; he’s one of the best relay men in the league and a good strong throw to the plate. Obviously a really challenging pick. Joey made a perfect pick and an optimal tag.”

Wood, Crawford and Kapler summarized the play perfectly. Everything had to be perfect for the out to be recorded. There are so many fundamentals and variables in a play like this one. First, Gonazalez has to absolutely field the ball cleanly and perfectly while making an accurate throw to the cutoff man. One hesitation, pump, or bobble and the play is over, the run scores. Then Crawford has to set his feet parallel to the left field line so he can turn and fire the throw as he is making the catch in more or less continuous fashion. Crawford’s throw was not accurate but it was powerful and that speed along with Bart’s pick and tag in one motion (the most impressive part of the play) were all crucial. If either Gonazalez’s or Crawford’s throws are a bit high or wide, enough to move the feet of the person catching the ball, the run scores.

I could analyze and praise this play all day.

The exciting relay play at home plate had shades of Game 2 of the 2012 World Series when Gregor Blanco and Marco Scutaro combined to throw out Prince Fielder on a play at the plate to preserve a scoreless game at the time. It was a critical play in the World Series, perhaps the single most important one and it helped the Giants take a 2-0 games lead against a much-favored Detroit Tigers team. We know the rest and its history.

Last night will go down in Giants lore like the Tauchman catch if the Giants are able to make the postseason. The 1-0 victory, thanks to sensational work by Alex Wood who attacked the Padres with a nice array of fastballs and a beautiful save by Camilo Doval in which he retired Machado, Bell and Soto, along with shutout outings by John Brebbia and Tyler Rogers, may end up being a pivotal game in the 2022 season and gives the Giants a three-game winning streak.

The Padres, meanwhile, have not scored in their past two games and are now 1-5 since Juan Soto was added to their team and since Eric Hosmer was jettisoned like space trash in an asteroid field.

Giants Get a Run

The Giants scored their run in the top of the fourth inning on a sacrifice fly from Thairo Estrada that scored Evan Longoria. It would be the only run of the game on a night when the Giants were mostly silenced by a rejuvenated Blake Snell (my money for the most perplexing pitcher in MLB) and other Padres relievers. The Giants struck out fifteen times and managed seven hits.

This game was Exhibit A of the importance of defense in winning baseball games at any level, especially at the Major League rank. Do you think Wilmer Flores or Thairo Estrada makes that relay throw? Do you think Austin Wynns makes that pick and tag? The key to the play and the Giants overall defense on this night was having their best gloves on the field. Do you think Joc Pederson fields that double cleanly and fires a throw as fast and as accurately as Luis Gonzalez did? At some point the offensive-first mindset of this Giants management and general management has to be questioned and re-calibrated. Every time I hear the excuse about the Giants missing Belt, Longoria and Crawford during their recent bad spell since the All Star Break I want to say this: Why aren’t their replacements competent Major Leaguers in their positions?

The failure of the roster construction is not just about losing your veterans and not planning on their eventual injuries and offensive decline. It’s also about signing too many players for their offensive metrics while ignoring their defensive limitations, and platooning them all over the place because back in the day they fielded a few grounders at second or third. It’s a philosophy that burns you eventually and we have seen far too many deficiencies defensively for the Giants this year. If someone were to examine every Giants loss in which poor defensively play had a role in allowing a run or extending a rally, pushing up pitch counts and giving teams more at bats, I would be willing to bet my autographed Tim Lincecum jersey that the Giants are near or at the bottom of the Bigs in this category.

Ok, enough with the critical analysis of Farhan Zaidi. I want to end this post with praise for Joey Bart, who has been extraordinary since his call-up to the big club and the trade that sent Curt Casali packing. The trade was a statement of faith in Bart as the starting catcher and if you don’t think it makes a big difference for Bart to have his team believe in him I have news for you. Kudos to Farhan Zaidi in making this move. It was the right call because it was time for Joey Bart to make his mark as a Giant and for the team to see what he is made of. Last night Bart’s scoop and tag was one of the best I have ever seen a catcher make, particularly with the stakes involved and the game on the line.  The big guy also went 1-4 and raised his batting average to more respectable levels. Confidence, young man. That’s what it takes and right now Joey Bart has it in spades.

It will be Alex Cobb versus Joe Musgrove tonight in game two of the series that begins at 6:40 PM.