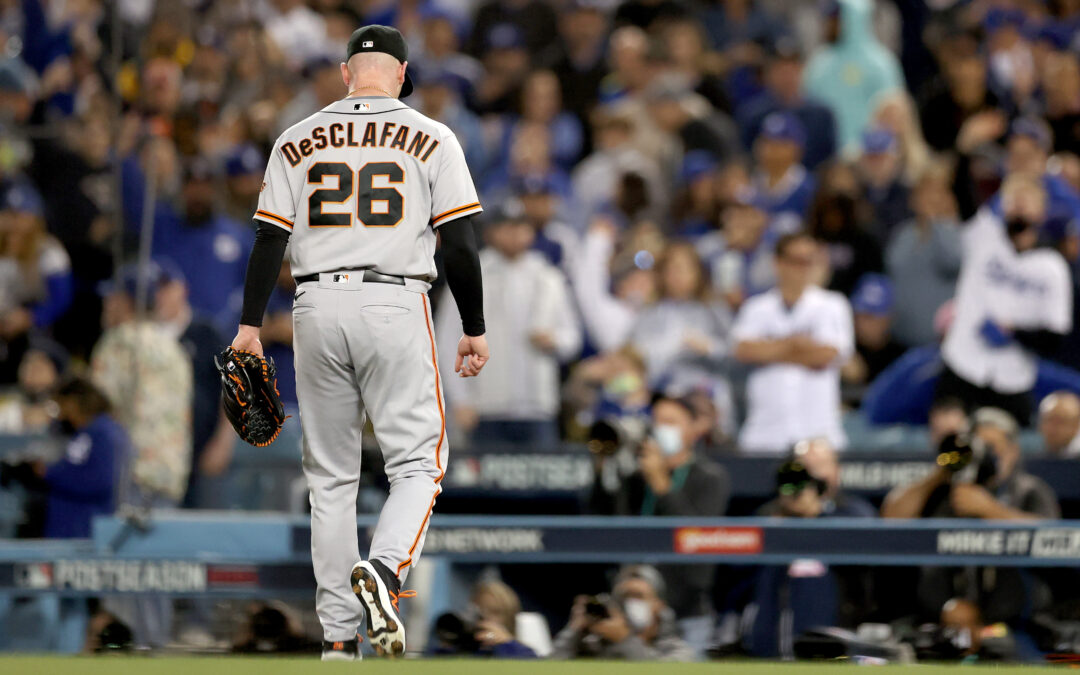 Well… That Did Not Go As Planned

Perhaps we all knew it had to come down to a decisive fifth game between the Giants and their hated rivals to the south in the 2021 NLDS. Last night’s 7-2 loss in Los Angeles was not as close as the score makes you believe. The Giants were never in this game. The only facet of baseball in which the Giants were successful was with the glove on the grass and dirt. Otherwise, we can call Game 4 a debacle, right from the bottom of the first when Anthony Desclafani would allow a run and his opponents were poised to score many more. For some reason, Desclafani was throwing mostly soft stuff and the Bums were all over it.

Desclafani would last 1 2/3 innings and give up two runs on five hits but his outing was much worse than that. It created a chain reaction of Giant relievers entering the game, pretty much all of whom failed in their task at limiting the damage either by needlessly walking Dodger batters or giving up runs, or both. The Dodgers never looked uncomfortable against Desclafani. Every swing was with authority and at no point did Desclafani’s body language or pitches inspire any confidence. In a critical game like this you need better from your starter if you expect to win.

It was just an awful night for Giant pitching in general, as if Game 3 never happened and the Giant pitching staff turned into the Diamondbacks. It was that ugly. The Giants would use eight pitchers and give up five walks and twelve hits in all. The Bums should have scored many more runs.

The Desclafani Decision and the Bullpen

I was fine with the decision to start Anthony Desclafani. Though he has had an up and down recent history with the Bums, he was the right guy for the moment. Gabe Kapler managed the game with urgency and did everything he could to keep it competitive, exactly as he should have. With a day off today, the bullpen gets a rest and Kapler has Webb as the starter for Game 5 with Kevin Gausman and Camilo Doval waiting in the wings.

Unfortunately, with the bullpen unable to keep the Bums at bay in Game 4 the Giant offense compounded the ugliness of the evening with a terrible night of their own. There were critical moments when the score was 2-zip and 4-1 and the Giants had multiple runners on base with the right guys up. They failed to get that big hit we were all wishing for on a night when Dodger pitching also allowed six walks. Kris Bryant did have two hits and knock in a run but the big question for the Giants is when will their young blood (Yaz, Slater, Wader Jr. and Duggar) start producing like they did in the regular season. So far they have two hits between them and have left many runners on base.

This was just a night when the Bums were better than the Giants.

Walker Buehler, pitching on three days rest, was superb, apart from a slightly uneasy first. He showed no signs of fatigue or rust or bust. His fastball was still at 97 and the Giant hitters were over-powered.

At the end of the day and despite the disappointment of this game the Giants will return home with their ace, Logan Webb on the mound. They did their job of winning one of two in the Southland and will need to win a game in front of their fans on their own field to advance to the NLCS to play the Braves, who ousted the Brewers yesterday. At 24 and 330 days Logan Webb will be the youngest starter in Giants history to play a decisive game in a postseason series.

Thursday night’s game 5 will be the only action in Major League Baseball and will be just the sixth winner-take-all game between two 100-win teams in MLB postseason history.