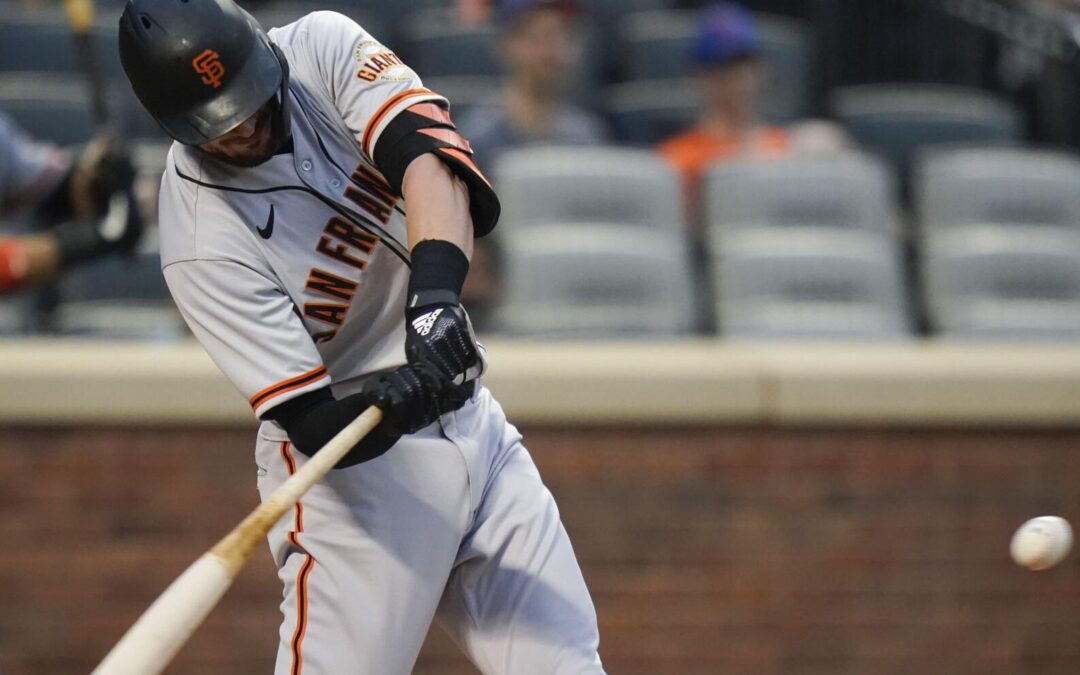 The key to a great pie is in the crust. The key to the Giants sweep of the Mets in New York was in the bullpen. Once again the Giants won a thriller, 3-2, with late-game heroics from the bullpen and a late-game clutch hit, from Darrin Ruf in the 8th. Never mind that the Giants had the bases loaded later in the inning and failed to add on a run. Never mind the sloppy defense in the second game of the series. Never mind the starting pitchers who could not get past the sixth inning in either game. This series sweep was due to three factors:

Kris Bryant started the day for the Giants with a first pitch two-run home run in the top of the first inning. It was another laser beam and it came off a flat slider down the middle about thigh high and Kris Bryant being Kris Bryant was all over it. The art of great hitting is knowing what to do with the pitch you are sitting on. In other words, being able to mash when you get the pitch you want where you want it. I always believed the most important pitch for a slugger is the first one, particularly in the first inning or in the ninth. Usually these are the points in the game when a pitcher is trying to start the count with a strike, which means he is usually content with a pitch down the middle. I never understood batters who take the first pitch as a routine since it may be the best pitch to hit. Bryant in yesterday’s game and Crawford in Wednesday’s game showed how effective first-pitch hitting can be when you know what to look for and what zone to look for it in.

The winning rally in the eighth began with a single by Yaz against the shift then a hit by pitch with Curt Casali up. That brought Ruf up with a heavy shift to the left side of the infield. The right hander would then stroke an inside fastball to second base, fortunately that part of the diamond was evacuated and Ruf’s ball went to right with Yaz scoring easily from second. Kevin Pillar airmailed the throw home and nearly killed LaMonte Wade Jr. in the process, who was on deck. The runners advanced to second and third. Slater then walked and then the Giants with a run in and nobody out with the bases loaded, failed to score.

Casali had to leave the game with dizzyness which is likely a result from a hard foul off the mask earlier in the game. Chadwick Tromp came in to pinch run.

With two outs and the bases loaded in the bottom of the eighth Jose Alvarez, continuing his dominant run, induced a ground out by pinch hitter Jeff McNeil. It was a critical point in the game. Since June 1, Alavarez has an ERA of o.79 over 33 games. That is simply stunning work. He has not allowed a run in his last 20 appearances. Since closer Jake McGee was unavailable after pitching on consecutive days Tyler Rogers recorded the save with a clean ninth inning.

Alex Wood was very good again until the very last pitch he threw in the bottom of the sixth. It ended up being clobbered by Pete Alonso for a two-run homer. Those would be the only runs he would give up in his 5 1/3 innings of work in which he only surrendered six hits with two walks while recording five strikeouts. With the victory the Giants are now 18-5 in August and with their 83-44 record they have matched the best record to date by any team in the San Francisco era, equalling the 1993 club after 127 games. Raise your hand if you saw this coming. This is simply rarefied air, GIANT Historic material we are talking about folks.

Buster Posey missed his second consecutive game with a left knee issue. BB9 went on the bereavement list to attend his grandmother’s funeral. Donovan Solano tested positive for Covid-19. He will miss at least seven games. One hopes no more Giants get the dreaded virus. Thairo Estrada was called up yesterday to take Solano’s spot on the roster. Anthony Desclafani threw a bullpen session with an eye toward returning to the big club on Sunday to start against the Braves. He had a right ankle inflammation issue.

The Giants travel to Atlanta for three against the surging Braves, who only two weeks ago looked out of the playoff race but now find themselves comfortably in first place in a suddenly very weak National League East division. Kevin Gausman is schedule to pitch tonight in a return from a short stay on the Injured List. He will face Max Fried with the first pitch at Dale Murphy Field scheduled for 7:20 PM.

Cassie Black just published another cool post in our Statistics section. This article covers a history of Giants team records and is a must read!