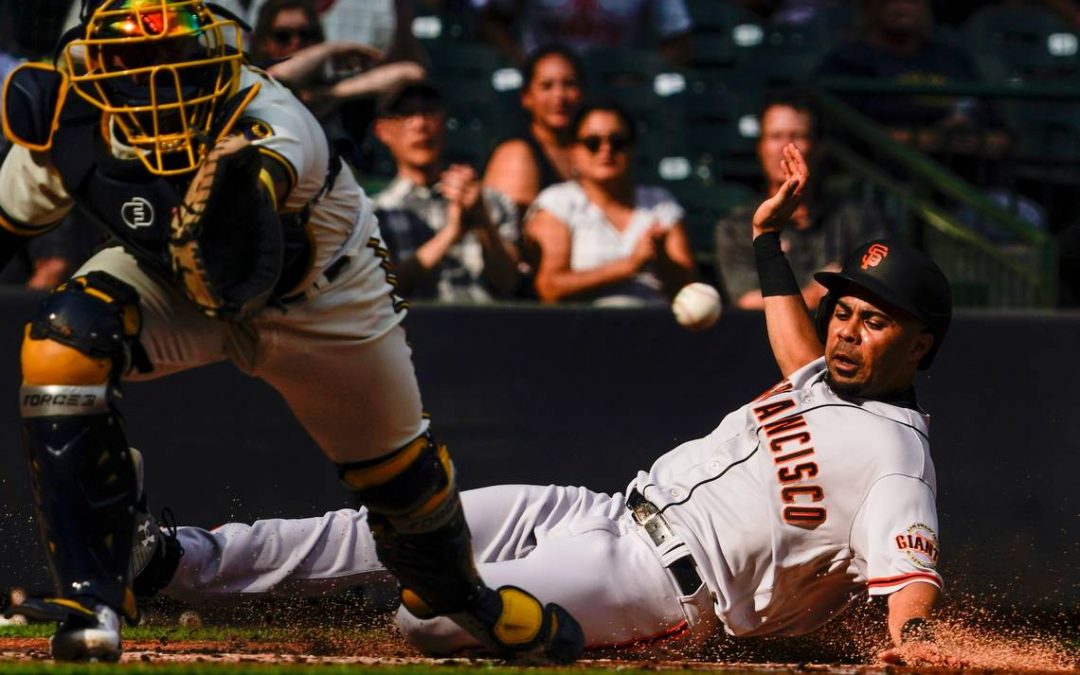 So we’re at the point of this Giants season where we look for silver linings. The Giants got swept by the Brewers yesterday by scores of 2-1 and 4-2. The pitching was mostly good. The hitting? Not so much.

In game 1, after Scott Alexander pitched one scoreless inning (Enough with this bullshit of relievers starting games!) Jakob Junis pitched six innings and gave up two runs on three hits. Who knows how this game turns out if Junis actually starts the game?

The Brewers pushed across two runs on RBIs from Yelich and Renfroe in the bottom of the fourth inning after the Giants took a 1-0 lead in the top of the third inning on a two-out double by Yaz off Corbin Burnes. Burnes would be solid the rest of the way and not allow another run in eight innings of work, and the Giants would end up with a total of three hits in the game. It’s hard to find fault with the Giants in this one, It’s Burnes who was too good for our boys from San Francisco on this day. That’s baseball.

“Nothing new. That’s Corbin Burnes. That was as good as we’ve seen him. His stuff was carrying through the zone. He was hitting the top of the zone. His cutter was working well. The ball was moving all over the place. It’s tough to name five better starters in baseball.”

Silver Lining: Jakob Junis looks like he can be a capable fifth or sixth starter in next year’s rotation, assuming the Giants stop this reliever as starting pitcher nonsense.

The Giants decided to pitch a reliever as a starter in game 2 as well. Obviously Farhan Zaidi and Gabe Kapler did not read my article from Wednesday:
“Take Your Analytics and Stick Them Where the Pine Tar Don’t Shine.” Or, maybe they did and they’re just using relievers to start games so they can piss me off. I must be getting under their skin a bit.

Scott Alexander pitched the first inning and allowed three hits, and three runs, one of them being earned.  Evan Longoria made a big error in that inning so it is not all on Alexander.

That was your ball game because the Giants managed two runs on four hits, one from a Pederson homer.

As for the decision to start two relievers in these games? Pathetic, Just Pathetic that the Giants do not use these games to try and audition new starting pitchers. I’m literally speechless with the stupidity of these moves. There is no upside. The Giants are treating these games like Spring Training appearances, making sure all the bullpen arms get some work. There is no justification for this move other than obstinance and being stuck with your philosophy.

The Brewers’ Peralta exited after two innings of work but a combo of five relievers held the lead and that’s it. There’s your sweep. The Brewers are fighting for a postseason Wild Card spot and the Giants….well, I do not know how to answer that one.

Silver Lining: Sean Hjelle pitched five innings and allowed only a run. He looked very good. His slider was sharp and effective.

Major League Baseball unveiled a list of sweeping and profound rule change proposals that would take effect next season if passed. They involve everything from a forced pitch clock to limiting how many times a pitcher could step off the rubber. They include expanding the size of bases (a totally absurd, unnecessary and terrible idea). Shifts would be banned (GG is ok with this one) and other attempts would be made to limit pauses in the game and keep the flow going. One example is allowing batters only one time our or one step out of the box per at bat. I am ok with this one too. Now, I am all for speeding up the game but it seems to me MLB is going about it the wrong way. I think these should be moves initiated at the Minor League level in the form of cultural shifts. Teach pitchers and hitters to stop pausing and the rules won’t be necessary. At any rate if they speed the flow of the game it’s a good thing. The bigger bases though? I don’t get that. Why toy with the sacred dimensions of the field and change the distance between the bases? This seems ill informed and a bit desperate.

I’m with those who say we should try to make changes to make the game better and faster but the key here is “better.” Does an electronic strike zone make the game better? hmmmm. maybe, but it also makes the game less interesting and takes away the skill of pitch framing for catchers. It takes away the unique nature of each umpire’s impact in the game. I am not saying I’m against the electronic zones, however. I think I need to see it in action before deciding.

Get rid of the damn runner to start second in extra innings. It’s a disgrace!