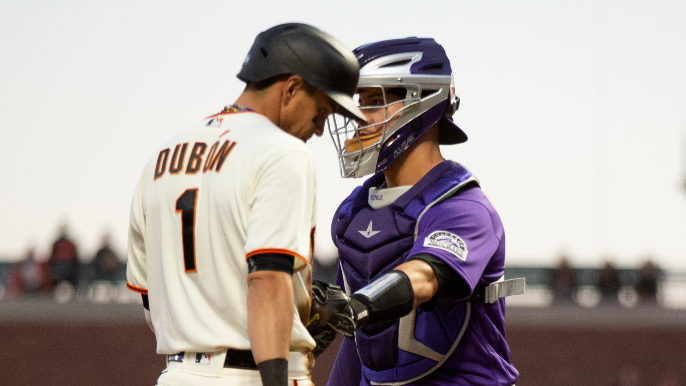 If you want to see an example of a train wreck on the bases watch the video of Mauricio Dubon colliding with third base coach Ron Wotus after Wotus initially waved him home then put up the stop sign a bit too late. The collision was not the end of the story however as Dubon decided to continue running home all the same and was thrown subsequently by half a mile. It was kind of a funny and ugly play and it was costly. If Dubon does not collide with Wotus (who in my mind is partly to blame for the fiasco) there is a good chance he scores and the Giants win last night’s weird and kinda ugly 7-5 ten inning loss.

Aaron Sanchez had a very weird start, going 4 2/3 innings allowing more runs (2) and walks (5) than hits (1). Buster Posey went 3-6 and Brandon Crawford hit a laser into McCovey cove in the bottom of the ninth to send the game into extra innings. It was BCraw’s third hit in four at-bats.

Here is the dramatic home run:

The story of the game may have been Gabe Kapler’s decision to send in Gregory Santos, a fresh young rookie making only his third career appearance, to pitch the tenth. It went badly with three runs (two homers) allowed. It was the ballgame despite the Giants getting one back in the bottom of the tenth.

Personally, I don’t fault Kapler there. The Giants bullpen is definitely the weak link on what appears to be a surprisingly resilient and strong team. Jake McGee is not himself, meaning he is hurt or in one hell of a slump. The Giants need a righty to step up and Kapler was hoping it would be Santos in that situation. It did not work out and I understand the second-guessing, if I don’t agree with those murmurings.

Veteran umpire Kerwin Danley was hit square in the face by a foul ball and was on the ground for a minute or so during last night’s game. We wish him a speedy recovery.

Giants Make a Trade With Yanks

The Giants acquired outfielder Mike Tauchman from the Yankees yesterday in exchange for Wandy Peralta. According to Aaron Boone, Tauchman is a strong athlete with excellent plate discipline who sees many pitches in every at-bat. It’s an interesting early season move by Farhan Zaidi and we will see how Tauchman fits into the Giants plans going forward considering they are thin at left field from a defensive standpoint.