“Thanks for Stopping By, Farhan” 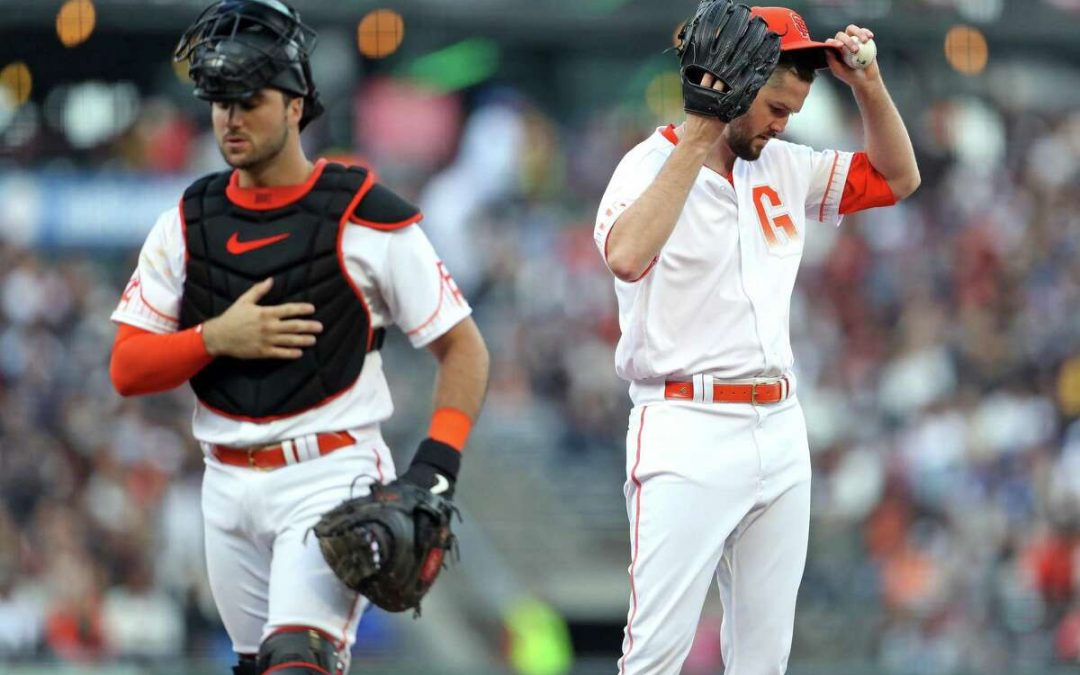 First, the bad news: the Giants lost 9-5 to the Dodgers last night. Then the worse news: The Giants made tiny little incremental acquisitions before last night’s trade deadline that did nothing to instil confidence or excitement in the fan base.

Alex Wood got rocked and put the Giants into an early 6-0 hole till the boys rallied for five runs in the bottom of the fourth, thanks in part to a gorgeous home run by Joe Bart. Bart also threw out a runner and was presumably playing with newfound confidence upon the news that Casali had been dealt to a team in the Siberian Semi-Pro Leagues.

The Bums scored three more in the 8th off the Giants pen and the San Franciscans looked awful in the field again. This has been your official glib GG wrap of last night’s game.

Mr. Baggarly was kind enough to summarize the Giants trade deadline deals in one tweet:

In case you missed it (or you’re writing a story and would rather embed a tweet than type all this out), here’s the full catalog of the Giants’ dealings today prior to the trade deadline: pic.twitter.com/etX9g7RJS7

So long Darin. You were a good Giant. I really enjoyed watching you hit vicious home runs to left field. Playing the field?… not so much.

Sooo, Mr. Farhan Zaidi basically made minor moves and stood pat, avoiding deals for Rodon or Pederson or anyone not nailed down on the roster. This can be explained one of three ways:

If number 2 happens, so be it. Welcome to the fold Carlos. If not, and Rodon walks away for basically nothing then Zaidi has to be fired. If ownership ordered Zaidi to avoid any trade that would be deemed “rebuilding”, such as acquiring top A or AA talent for Rodon then ownership needs to be fired.

Zaidi’s Visit to the Booth Did Not Go Well

Here are the opening paragraphs from Andrew Baggarly’s excellent summation of the moves, non-moves and the Giants play when Zaidi joined Kruk and Kuip in the broadcast booth during last night’s 9-5 loss to the Bums:

Farhan Zaidi took a seat in the broadcast booth and put on a headset in the top of the second inning Tuesday night. Duane Kuiper was to his right. Mike Krukow was to his left. The baseball team that Zaidi assembled, and chose not to disassemble when the trade deadline chimed a few hours earlier, spread across the field in front of him.

There were a lot of uncomfortable silences.

LaMonte Wade Jr. froze on a pop-up and came up empty on a diving attempt. Austin Slater couldn’t make a sliding catch on a ball the Dodgers’ fifth-best defensive outfielder probably snags standing up. Slater bobbled a ball for an error and threw without purpose to the plate. Alex Wood whizzed a pickoff attempt into center field. There was a walk and a hit batter and a couple of sacrifice flies that probably kept the inning out of mercy-rule territory. The Dodgers scored four runs. Zaidi didn’t make it to the third out.

“Thanks for stopping by, Farhan,” Kuiper said.

It might have been the lowest point in the four-year tenure of this baseball operations administration.

What to Make of This?

If this is what ownership wants: scrap heap acquisitions, penny-pinching payroll philosophy and very little draft progress after four drafts then guess what, Greek Giant ain’t happy. It’s very hard to discern any vision or plan after yesterday. Last year, that magical mystery 107-win, division championship season was beautiful until the Giants lost in the first round to their hated rivals. If this season plays out in the current trend then three of the four seasons of Giants baseball under Zaidi’s stewardship can hardly be called successes. (insert ironic understatement here)

If the Giants failed to move their top fungible assets because Zaidi was not willing to accept the market prices then we find out Rodon walks, it’s time for a new GM or whatever his title is.

Sorry, but I did not sign up to be a fan of the San Francisco A’s. I’m plagiarizing myself here but it needs to be repeated. Right now Zaidi is running the Giants like ownership has tied his hands for whatever financial reasons. It’s not Zaidi’s fault BB9 has missed so many games. It’s not his fault Brandon Crawford is breaking down or Evan Longoria continues to look 63 instead of 36, missing a ton of games and taking forever to get well. But Wilmer Flores playing second base (a sight I never want to see again) is. The lack of depth and the lack of bold, brave and risky moves in the draft or via trades and free agency means Zaidi is too conservative to be a successful GM.  You cannot play or coach baseball scared. You cannot GM scared either.

I don’t need to see anymore. I do not want to wait another two or three years hoping Kyle Harrison will be a stud. I’ve seen enough. I see a GM or an ownership group standing still while the Padres (with the Soto acquisition) and the Bums getting better and richer. The gap in talent between the Giants and their two divisional rivals could be something that lasts five or ten years, it’s that bad.

Get ready for a return to the early 1980s levels of losing baseball, Giants fans. Get ready for sub -10,000 crowds at the ballpark, Giants ownership.

Legendary man and announcer Vin Scully died yesterday. Scully was one of the all-time great broadcasters and a kind and elegant man who could make anything interesting that came from his voice. He, of course was the long-time Dodgers broadcaster but let’s not forget he did many national telecasts for other games. I remember him fondly. He was a true lover of baseball and baseball history. He was the very definition of class. He was also, a Giants fan!

This is probably the only time you will see a tweet from the Los Angeles Dodgers Twitter page on Together We’re Giants: