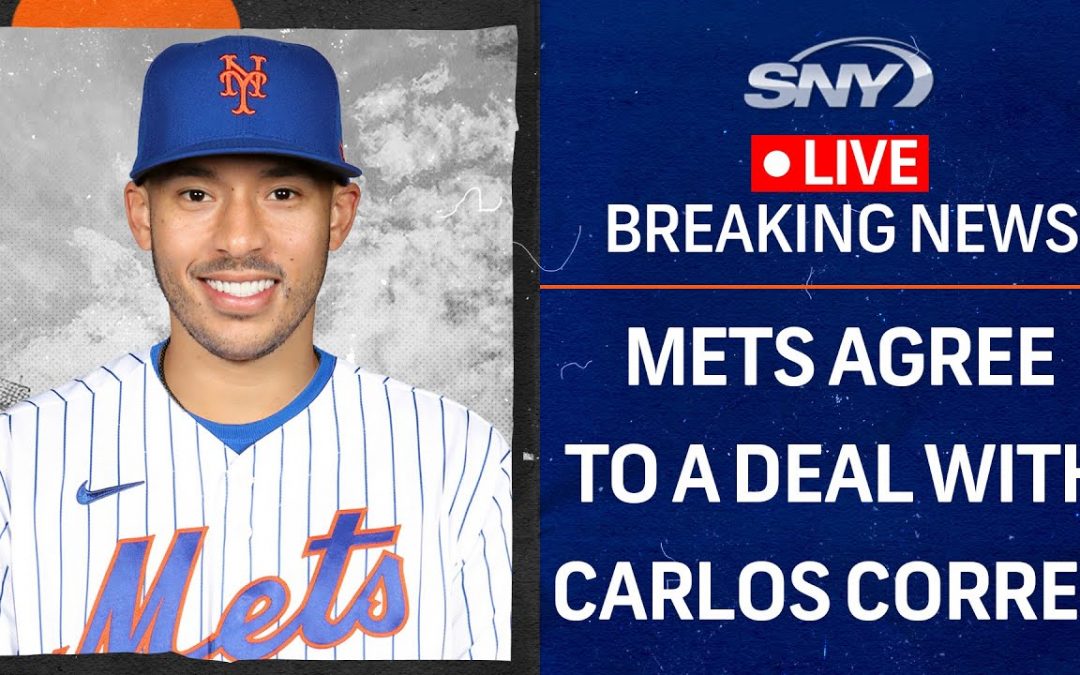 It’s been 24 hours since the news broke that Carlos Correa signed with the New York Mets after the Giants backed out of the longest contract in their history due to concerns with an ankle injury Mr. Correa sustained as a 19 years-young budding baseball star. Before I get into my take on this disaster lets look at the facts:

“While we are prohibited from disclosing confidential medical information, as Scott Boras stated publicly, there was a difference of opinion over the results of Carlos’ physical examination. We wish Carlos the best.”

Here are some questions Andrew Baggarly raised in his piece in The Athletic on the Carlos Correa controversy:

• Why weren’t sufficient concerns raised in the Giants’ initial medical review, which is part of their standard workup on free agents prior to the start of the signing period?

• Did the Giants sense any hesitation from Correa, especially after the Mets made their late play and offered a chance to star in a bigger market alongside friend and fellow Puerto Rican Francisco Lindor? If so, did the Giants feel any of their own hesitations to commit a 13-year contract to someone who might not have their heart fully in the deal?

• Why didn’t the Giants approach the offseason with the decisiveness of, say, Philadelphia’s Dave Dombrowski, who is known to move aggressively and who wrapped up Trea Turner before the Winter Meetings began? To what extent could their current predicament — arguably the most disappointing offseason by a team in major league history — have been avoidable?

Ok, now that most of the facts are known here is where I stand: The Giants, while looking incompetent, feckless, weak and indecisive, still may have dodged a bullet. In no universe is Correa worth the kind of contract the Giants were ready to give him. No, just stop.

Now, with that said, it appears the Giants used a weird and old injury that played no factor in Correa’s durability as a pretext to back out of the deal, in the process making themselves the laughing stock of Major League Baseball, even professional sports. This hurts their credibility and image. It hurst me as a passionate fan. Buyer’s remorse, especially with that kind of contract, is one thing but why did this go down so badly, at the last minute, when the player was ready to give a press conference and when so many other elements where in the works? It defies logic so it must be incompetence.

I want to know who is responsible. My guess is the buck stops with Charles Johnson, the. majority stakeholder and principal owner of the Giants.

Farhan Zaidi looks bad here too. He may be the fall guy in all this but his reputation is irreparably damaged. Between three losing seasons in four years, underwhelming drafts with major whiffs in top picks, a never-ending roster churn of AAAA players and the failure to lure any big-name free agents it’s hard to see Zaidi staying on as Giants head honcho beyond this season. Did I mention the dwindling attendance? How about disappearing fan interest? My, oh my how low this beloved franchise has fallen ever since the three World Series championships in five years.

The Moral of the Story: You don’t hand out the keys to the kingdom to a guy who was at best an assistant GM before taking on the Giants job. You don’t push out Brian Sabean and Bruce Bochy for this regime. God knows how many years it will take to recover from this damage.

The Fans Speak Out

Let’s hear it from some of the fans:

As a Giants fan, I can’t believe our front office bungled this so badly. He has been on DL eight times and Mr. Boras sent his medical information prior to starting negotiations. How could they have not taken that into account on the front end. This looks like cold feet pure and simple. It’s not often that a front office leaves a negotiation with a more unfavorable/unsavory reputation than Scott Boras and Steve Cohen, but the Giants brass have done it. You’re welcome Mets fans!

Here’s my ranked list of grievances of the clown act formerly known as the Giants (this won’t even count the loss of Correa):

1) the damage this episode has on future free agents from even considering this team
2) the absolute radio silence on all fronts
3) the probability that the cold feet came from ownership and the signs that this regime is CHEAP
4) the lack of communication (esp. to Craw) that damages credibility with the players
5) the absolute waste of a year (prove me wrong and win 86 games and limp into the playoffs) before the calendar year even starts
6) the charade of Ohtani signing here has zero chance; we’d be lucky if he even looks this way
7) the gall of the team to charge Hall of Fame prices for AAAA lineups and still relentlessly market today of all days. Give it a rest for a little bit.
8) now we have to pin our hopes on a crop of prospects that underwhelmed last year and seriously raise doubts for the next five years

I love my team but with heightened expectations come the occasional pain and this one sucks like no other downturn.

-Eric K. (courtesy of The Athletic)

I prestige organization now in absolute shambles. Oracle Park will look like Candlestick Park on a Tuesday night against the Expos by the second week of the season. Good luck getting a Machado, Devers, or Ohtani to even be remotely interested next off-season. As a diehard Giants fan I’m absolutely disgusted with what has happened in the last 24 hours.

-Will M. (courtesy of The Athletic)

Bad faith negotiating with the top free agent on the list, offering him a contract then reneging because of issues known about, embarrassing and humiliating him while he’s stinting in an SF hotel room waiting to be announced as the new face of the franchise? Potential free agents notice that and won’t even listen to the Giants. Meanwhile folks who live in an alternate universe fantasize about big moves the Giants can make. Has Farhan or Charles Johnson ever made a big move? Yeah, they signed DeSclafani and La Stella to 3 year contracts. Those sure turned out swell. That’s it. Waiting for this group to do something smart puts you in the place of Charlie Brown kicking the football while Lucy holds it.

-Paul G. (courtesy of The Athletic)

With all this being said, the Mets are trying to buy a ring while the Giants now appear as the cheapest team in baseball. There is nothing worse than a cheapskate millionaire and in MLB terms, that’s what the Giants are. Worse still, they are also bad, incompetent and just plain an embarrassment.