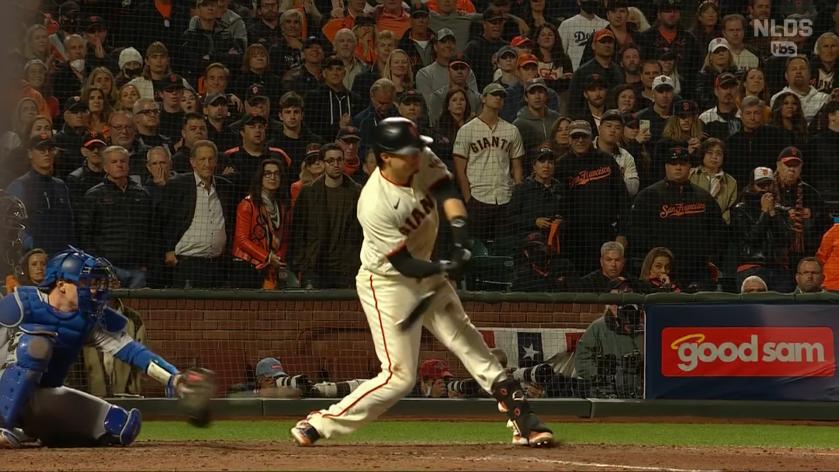 I have never been prouder to be a Giants fan. Not when they won in 2010, 2012 or 2014. No. This was a special season. This was a special team. Our 2021 Giants showed the sporting world how winning as a team and exceeding expectations, during a pandemic no less makes for something that goes beyond baseball, a phenomenon that gives joy and hope to all of us who care about how you win as much as winning. Last night the 2021 Giants season came to an end in extraordinarily bitter fashion with a 2-1 loss to the villains from Hollywood in Game 5 of the NLDS. That the loss happened at Willie Mays Field made it especially painful. That the game ended on a blown check swing call only compounded the bitterness

The Bums were just a bit better than the Giants last night and in the series. One win, one run and one game better but better nonetheless.

The decision to start Urias in the third inning and start the game with Knoebel and then Graterol was a risky call for Dave Roberts that in the end was a big move that worked. It bought two innings to extend Urias, who gave up the only run the Giants would score (on a homer by Darrin Ruf). The bottom line of the series is this, the Giants young core did not hit. The Giants pitched well enough to win. They played mostly excellent defense. They simply did not produce enough, particularly with men on base, to beat their arch rivals.

Last night the Bums had eight hits, four of those came off the bat of Mookie Betts. He hit .450 in the series and was always in the mix of trouble. For the Giants, their best hitter was Kris Bryant who had two more hits in the game and who hit .471 in the series. Other than Buster, no other Giant hit much at all over the course of the NLDS. Last night the Giants had six hits and a walk for a total of seven base runners, one of whom was Ruf’s homer. That was the offense. That is your story.

If am Farhan Zaidi I watch every game of this series and think about what positions need an offensive upgrade big enough to overcome the Hollywoodians because quite frankly, I believe the Giants path to their next World Series title will run through them, next year and beyond.

Last night Logan Webb was wonderful. The Giants played tough. They played hard. While there were some questionable decisions (why on Earth did they keep pitching Bellinger down and in?) in the series there were still far more achievements and moments of sublime joy in the 2021 season to savor and help lessen the pain of this loss. Let us remember that in the heartbreak of this loss, our Giants had the best record in baseball and the best team with a legitimate MVP candidate in Brandon Crawford, broke the franchise record for wins and won their division in epic fashion. Let us remember that second-year Skipper Gabe Kapler made all the right moves and will win his first Manager of the Year Award. Let us remember the blossoming of Camilo Doval, perhaps a superstar in the making; the emergence of Late Night LaMonte: and the sensational bounce back seasons of Buster Posey and Brandon Belt.

Why We Hate LA

We can loathe our arch rivals for many reasons: for existing, for being from LA, for their park, for their lame fans, for their lame media, etc. What I loathe them for the most is this: all the wins and all the World Series rings in the world will never make them a great team. They will never be classy. They will never be special with this generation of players and with their culture of me-first baseball. They are a strange and crude assemblage of fantastic drafting and development with store-bought trades and superstars on rental. They are a bunch of preening, vain, and selfish hot dogs who embarrass themselves on a nightly basis, despite the exception of a few superb ballplayers and superior people (Mookie Betts, Clayton Kershaw, and Trea Turner). They are full of themselves. They are entitled.

They are a bunch of individuals who were taken to the limit by a Giants team with a much lower payroll and a roster that on paper looks substantially lesser than their own.

Why We Love the Giants

This is why I love the Giants. They do not preen. They do not pull lame antics like celebrating fly outs they thought were homers before leaving the batters box. They are classy. They are tough.

“The unselfishness that this team showed throughout the year. The trust that they showed in one another was second to none, better than any season that I’ve ever been a part of as a player, as a coach, in any position in baseball. I just respect the hell out of a team-first mentality. I’ve never seen it like this. This is the best I’ve ever seen. So if there’s a message, it’s continue with that, and we’re going to build on this season and be better because we have that foundation in place, that foundation of trust and unselfishness.” There is much to discuss about the offseason, about 2022 and about evaluating 2021 but for today let us remember this remarkable, beautiful, resilient and powerful team in a positive light. There will not be another like it ever.