The Giant Spirit of St. Louis 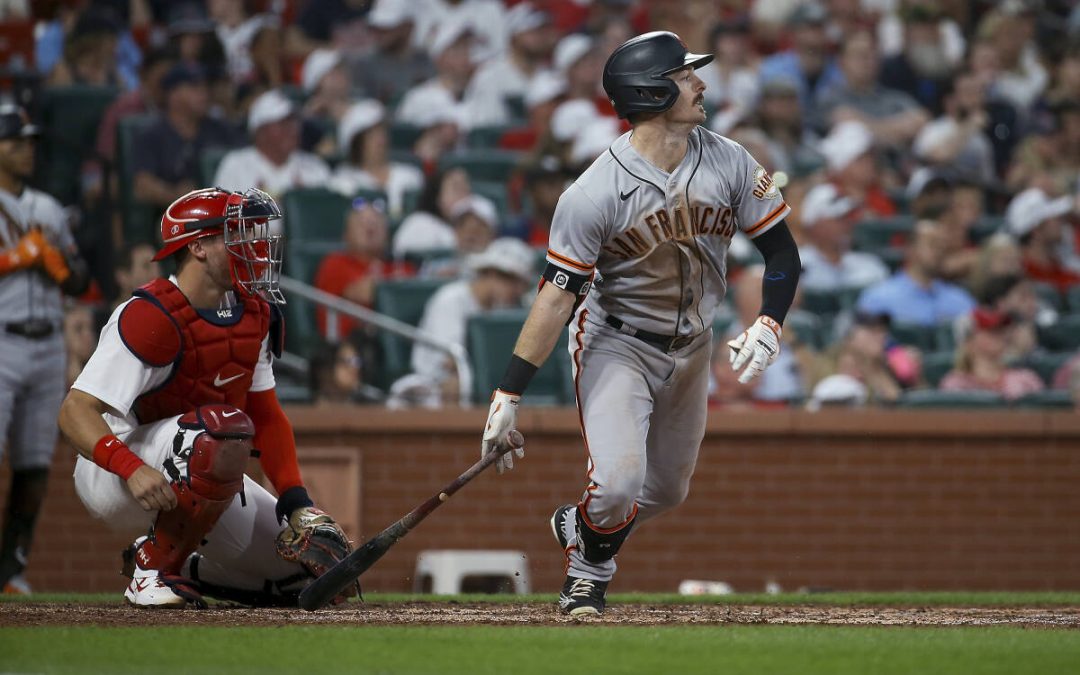 Folks, this is what we call in Major League Baseball “being on a roll.” The Giants are on it, flying high and simply playing great baseball. Last night they hammered the Cardinals 8-2 thanks in part to a huuuuge five-run eighth inning. Make no mistake, the Cards and Giants are fairly evenly matched clubs. But in last night’s game the difference was Logan Webb and a Giants line up that put up big hits in the form of a two-run double off the bat of Yaz in the top of the third to give our boys a 3-1 lead in what was a tight game until that all important eighth.

Evan Longoria hit a two-run double. Curt Casali went “boom” with a man on for two more runs and Brandon Crawford had an rbi hit as well, all in that top of the 8th inning.

Longoria’s two-run double was ripped to right center field and split the gap. It was his first RBI knock of the year and a sight for sore eyes!

It had been too Longo 🫶 pic.twitter.com/gcR8Z744A9

And the Yaz double:

Logan Webb was stellar pitching six innings and allowing only an RBI groundout by Paul “Giant-Killer” Goldschmidt. He allowed only three other hits while walking three and striking out one. To me the most surprising stat of his line is the lone strikeout but the most important part was the lone run. Webb was very strong pitching efficiently and recording his fifth win as he lowered his ERA to 3.48.

Webb would cede to the trio of Leone, Zittel and Garcia, each of whom pitched a shutout inning to close out the game and start a big road trip in auspicious fashion for the good guys.

One question I would like to ask Misters Zaidi and Kapler: With a huge lead why not let a relief pitcher go more than one inning, maybe two or three and rest some of the arms in the pen? My guess is they would answer thusly: “Aren’t you cute GG! Our relievers are finely tuned instruments that already had a day of rest Thursday. Without regular use their timing and effectiveness could be in jeopardy. Stick to writing blogs and we will run a world-class baseball club.”

The Giants have now won six in a row. With the win they are one half game behind the Bums, in third place. The Padres are only percentage points behind the NL West leaders. It looks like one hell of a divisional race in the National League Left Coast.

Here is a cool piece by Tim Keown on Giants Manager Gabe Kapler. It analyzes Kapler’s meticulous side and illustrates the ways in which Kapler is very much his own man and his own Manager.

This is just fantastic and it’s from the article:

“Kapler’s idyllic vision of a baseball team — the one he and president of baseball operations Farhan Zaidi are trying to create and sustain — resembles a sitcom neighborhood. Picture it like this: everyone sits on their front porches and watches the kids ride their bikes or play catch or kick a soccer ball, and every neighbor feels comfortable calling a kid over and suggesting ways of improving their bike riding or their throwing or their kicking.

Game two of the series is today at 2:15 local time with Jakob Junis facing Dakota Hudson.

Out of Left Field

This has been your pinch-hit version of Out of Left Field. Dr. Lefty is on assignment and will hopefully return very soon.