The Legend of LaMonte 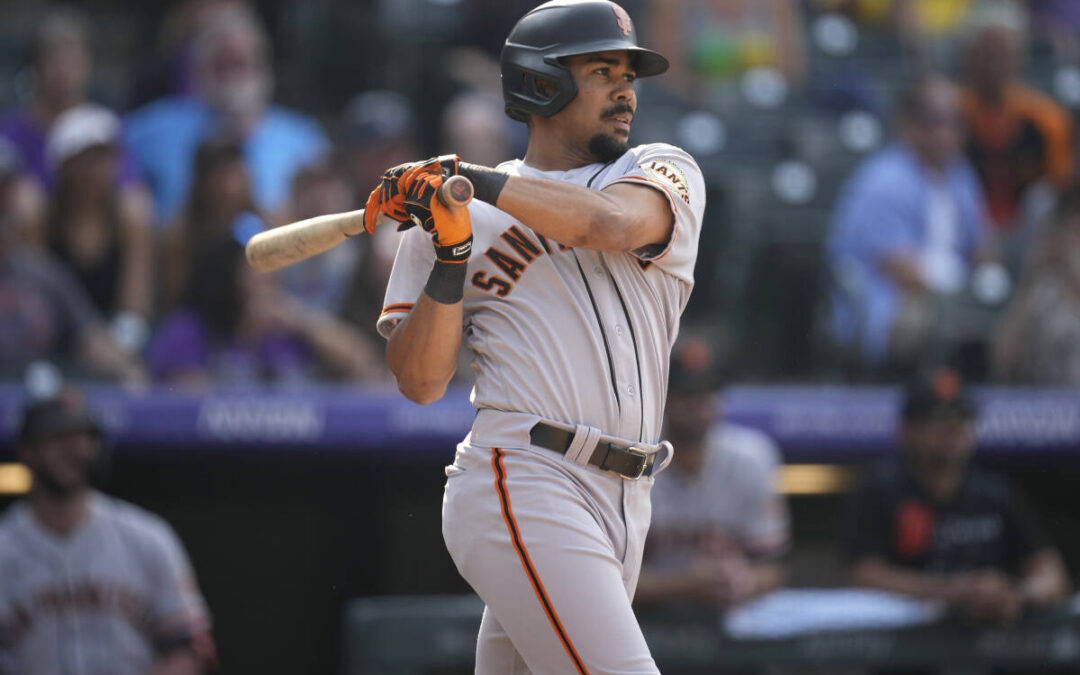 I just love this!

The legend of LaMonte Wade Jr. continues to spread across the Major Leagues. We may end up marking this magical 2021 season of Giants baseball as “The Year of the LaMonte.” Yesterday the Giants entered the top of the ninth inning down 4-3 to the Rockies in Denver with the closer Carlos Estevez pitching. Buster Posey lead off the ninth as a pinch hitter and promptly walked. After consecutive singles by Thairos Estrada and Brandon Belt LaMonte Wade Jr. lined a single to right center field off a 97 MPH fastball up and tight in a 1-2 count to drive in the tying and winning runs. Wade Jr. would later explain that he has been choking up with two strikes to focus on contact. What a brilliant young hitter! All you Little Leaguers watching from home should learn from this lad. It’s cool to hit singles too, especially ones that win baseball games in the ninth inning!

Mr. Clutch is batting .600 (9-15) with nine ribeyes in the ninth inning this year. No, that is not a typo. He has 17 go-ahead runs batted in as well, second only to BCraw’s 19. Wade would finish with two hits, two runs batted in and two runs scored on the day. In the process he raised his batting average to .257. This is becoming quite a phenomenon for the young man.

Evan Longoria followed Wade’s heroics with a two-run double that appeared to be misplayed by Rockies center fielder Garrett Hampson. Those two add-on runs were big in a place like Denver where one-runs vanish faster than the weather changes and where the Giants were able to exhale after the inning heading into the bottom of the ninth.

Jake McGee pitched a clean and quick ninth to close out the series sweep, which was, by the way the first time this year the Rockies had been broomed at home.

It was an interesting game up to that point. There was a pitcher’s duel until there wasn’t. There were home runs. There was bad defense. There were clutch hits too. Both starters, Anthony Desclafani and Jon Gray, put up zeroes in their frames until the Rox scored three in the bottom of the fifth to send the Giant starter packing after an outing of 4 1/3 and seven hits to go along with the trio of runs. In that bottom of the fifth BCraw could not record an out on a grounder he often succeeds in grabbing and throwing. Mr. Wade Jr. had a ball clank off his glove in deep left and just missed making a running catch. Those miscues-plays-not-made were a big part of the inning.

The aforementioned Brandon Crawford would hit a three-run home run in the top of the sixth to tie the game. The opposite field dinger was a Denver Special, just clearing the fence. That equalizer was short-lived however as Elias Diaz would homer in the bottom of the sixth to give the Rockies the lead again. It would stay that score till the magical ninth inning.

The home run is Crawford’s 20th.

Tied it up with No. 20 pic.twitter.com/ymHT00PkaD

“At the start of the year, if you would have told me that I’d have 20 homers in early September, I would have been pretty excited.”
-Brandon Crawford

The Giants Lead the NL West by Two Games

The win is also the fourth straight for the San Franciscans.

The win also came in the last game of a 16-game stretch without an off day against tough teams. The Giants went 10-6 and Gabe Kapler was quick to compliment his players on yesterday’s win by lauding them for their tenacity, focus and ability to win a tough game after a long haul of ballgames.

“It’s big. It’s a relatively tired group. It’s been a long stretch of games. After this off-day, I think we have nine consecutive games as well. It’s really big for everybody to just have a full day off and reset.”
-Gabe Kapler Alex Wood was cleared to rejoin the Giants on Thursday. He looks to be on the road to recovery. Yaz fouled a ball off his ankle and was in extreme pain after ending his at bat with a walk. He was later removed from the game as a precaution. Wilmer Flores is expected to join the team on Saturday with Donovan Solano returning as early as Sunday.

The Giants are off today for the first time in seventeen days before heading to Chicago for three against the Cubs. Gabe Kapler announced that Friday night’s game will be pitched by the relief corps. No word yet on Sunday’s starter. Saturday it will be Kevin Gausman.