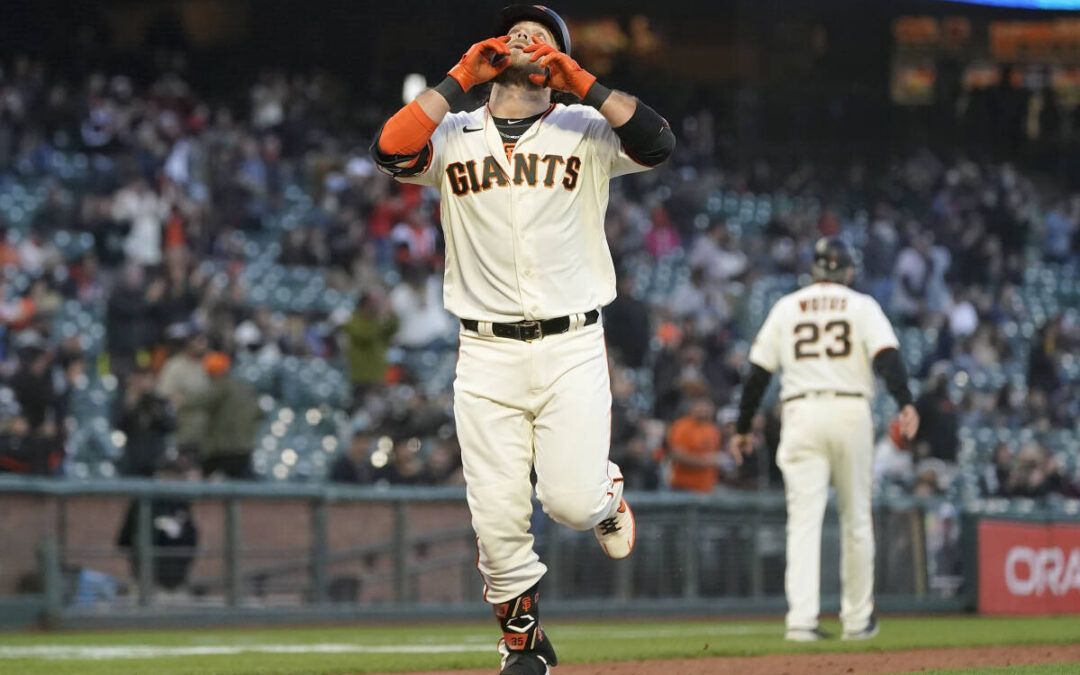 Yes. 257.  That is Brandon Crawford’s batting average after last night’s game. If there ever was an example of a hitter making his knocks count it is Brandon Crawford. Last night BCraw hit a go-ahead two-run home run, his 15th of the season, in the bottom of the fifth inning and added a sacrifice fly to power the Giants to a 5-2 win over the Diamondbacks in San Francisco. The long ball came on a 92 MPH sinker off Diamondback pitcher Mike Peacock and went the opposite way into the left field seats. It was pretty.

The win was big for many reasons, not least among them was the awakening of the Giant bats that mostly disappeared and decided to go sightseeing in Washington during the four-game series this past weekend.

The three ribeyes by BCraw give him 44 on the season and lead the team by a wide margin. Not too shabby for a guy hitting .257. The RBI total puts Brandon Crawford at second place in the National League behind the 49 of Jesus Aguilar of Milwaukee. It appears that Mr. Crawford is making a strong case for himself as the starting shortstop in the All Star Game for the Senior Circuit. Raise your hand if you predicted that at the beginning of the season!

Through his first 58 games of the season Crawford has now struck the second most home runs of his career for this point of the season. He had 21 in his 2015 campaign.

Overall the Giants had 14 hits in the game and could have scored more. Equally key to the win was Alex Wood’s return to form with six innings of mostly excellent work allowing two runs, four hits, one walk and getting seven strikeouts.

Brandon Belt and Donovan Solano each had two hits with Curt Casali getting three knocks.

Jake McGee pitched a perfect ninth for his thirteenth save of the season.

With the win the Giants are 19-6 on the season following a loss, perhaps their most impressive stat of the season from a team point of view.

For the Diamondbacks, well let us say they are hurting. The last time they won a road game it was on April 25 and Madison Bumgarner threw a no-hitter in the first game of a doubleheader. That makes nineteen straight road losses for the snakes. How weird.

Here is the Crawford homer.

The Giants and Diamondbacks play game two of the series at 6:45 pm with Zack Littel pitching for San Francisco. The Diamondbacks have not yet announced a starter.