This Is Not Good Folks 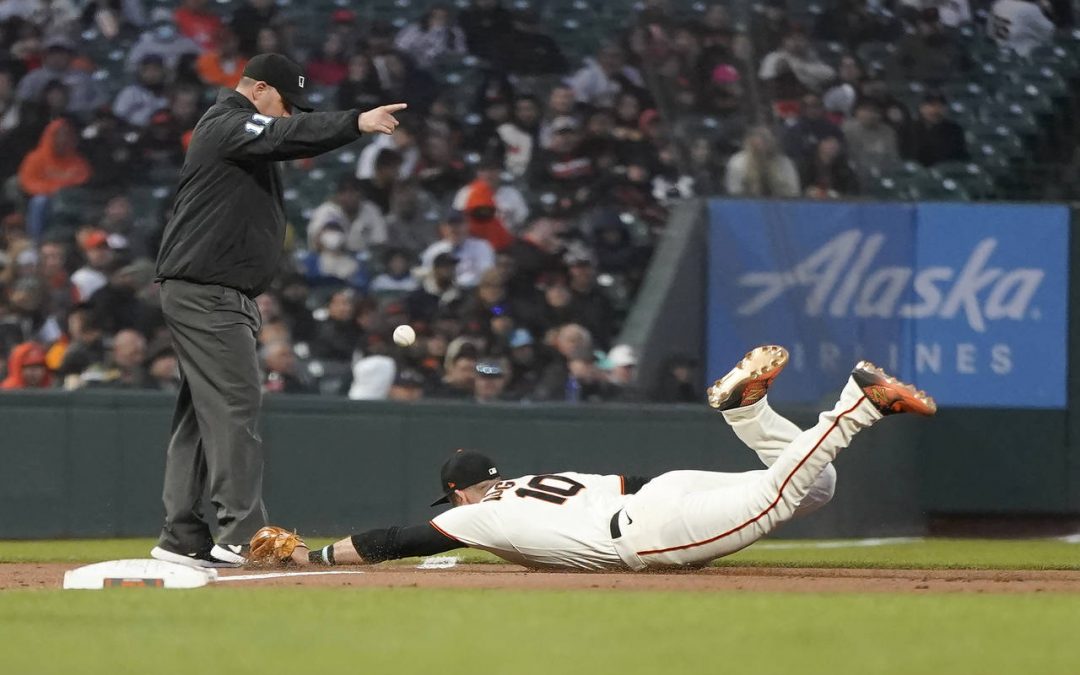 The lack of athleticism in certain positions is starting to rear its ugly head for the Giants. Last night’s 13-3 massacre at the hands of the Mets turned on one play. With two outs and the bases loaded (two of those base runners reached on infield singles) Francisco Lindor hit a high fly ball down the left field line that dropped just in front of Darrin Ruf who was doing a full sprint from his position somewhere east of left field. He ran a looong way and just missed catching the ball. It looked like it would be foul but no, the ball landed just inside the left field line. Ruff ended up in the bleachers after his run, so did the baseball. That meant only two runs would score on the play, tying the game at 2-2. Pet Alonso then made it a 5-2 game with one swing of the bat on a slider down and in that was not a horrible pitch. It was a great piece of hitting by the Met slugger, who, over the last six games, has gone 12-for-26 with three home runs and 11 RBIs. He is on fire.

The key play however  was the Lindor fly. If a speedier or more sure-handed left fielder gets that ball, the Giants are out of the inning with a 2-0 lead and the game takes a very different turn. I am not singling out Darrin Ruf here. He made a great effort. The problem for the Giants defense however, is that with guys like Flores and Ruf in the line up and on the field for their bats, their defensive limitations will eventually reveal themselves. That’s what happened last night.

Last season it seemed that those defensive deficiencies rarely occurred at key moments or when they did, the Giants pitchers got the big out; or the Giants bats made up the difference. The problem this season is teams like the Padres and Mets are MUUUUUUCh-improved and those types of mistakes or plays not made cost you dearly against good teams.

Now, we can argue, and I am sure Cobb would agree, that he should have made a better pitch against Alonso…

Cobb did go six innings and allowed six runs on ten hits. His was a weird line but it is easy to say he deserved better.

These blowouts are getting ridiculous and embarrassing.

The Mets piled on with four more runs in the top of the eighth and three in the top of the ninth. Those ninth inning runs came off Luis Gonazlez, a Giants outfielder making his third pitching appearance of the season and turning a Major League Baseball game into a Carnival show. I have said it before: There is no reason on God’s earth to use a position player in that situation. It tarnishes the game and risks injury to the poor soul called upon to take the mound. With the Giants carrying 13 pitchers in the bullpen it’s just embarrassing to have to resort to Gonalez in that situation. Major League Baseball needs a rule change pronto.

Mauricio Llovera got knocked around for the runs in the eighth inning.

Now for the Giants hitting attack, the only highly was a Brandon Crawford two-run homer to dead center that gave the Giants a brief 2-0 lead.

Tommy LaStella singled in a run in the bottom of the ninth and Evan Longoria had two hits.

That was it for the hitting. Mets starter David Peterson was also very good. He would end up retiring eleven straight batters before he left the game having thrown 99 pitches. He went six innings and allowed only three hits and two runs.

The Giants Are In a Rut

The Loss makes five in a row and puts the Giants home record to 11-11. Boy did things go south in a hurry this season! The boys are now 22-19, six games behind the Los Angeles ballplayers, in third place. This is a strange season with more than a few horrible NL teams (Reds, Cubs, Nationals) but much-improved teams like the Mets. The Braves are probably going to bounce back even though letting Freddie Freeman walk looks like a gargantuan mistake. Depending on what happens with them and the Cardinals, it appears a postseason slot is no sure thing for the Giants. Buuuuuut, it is early as they say (prays for a magic acquisition by Farhan Zaidi).

Stuart Fairchiled was recalled from Sacramento to take Austin Slater’s place on the roster.

50% in favor of sending Bart down to AAA Sacramento immediately. 26% against, 22% say give him another week and 1% saying it does not matter, the Giants are a third-place team.

Game two of the series is tonight at 6:45 PM. It will be Chris Bassitt of the Mets against Logan Webb. The Giants need a win, desperately.