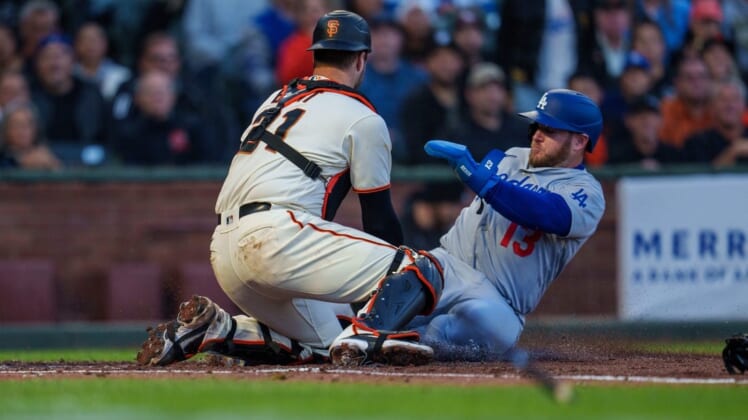 The TWG comments are more interesting than the Giants: Some Lowlights from last night’s 3-0 loss to the Dodgers at Willie Mays Field:

Gabe Kapler has lost control of this club.

Before the game the Giants and Dodgers held a classy ceremony for the memory of Vin Scully, who died two days ago. Both teams lined up on the foul lines as Scully appeared on the video screen and recited some beautiful words. The Dodgers wore a “Vin” patch on their left sleeves in his honor. Many Giants fans honored Vin Scully with signs and other gestures in camaraderie with Dodger fans. It was a nice moment. Classy all the way around.

From one legend to another 🧡 pic.twitter.com/Kh7EJonYsH

Bryce Johnson made his MLB debut last night. He went 0-2 with a walk and looks more than competent in center field.

Newly-acquired J. D. Davis made his Giants debut last night and played third base. He went 1-4.

The Giants will try to salvage some self-respect against their rivals from Hollywood in the series finale. It will be Kershaw vs. Junis. We got ’em right where we want ’em, Giants fans. Game time is 12:45 PM, Willie Mays Field time.