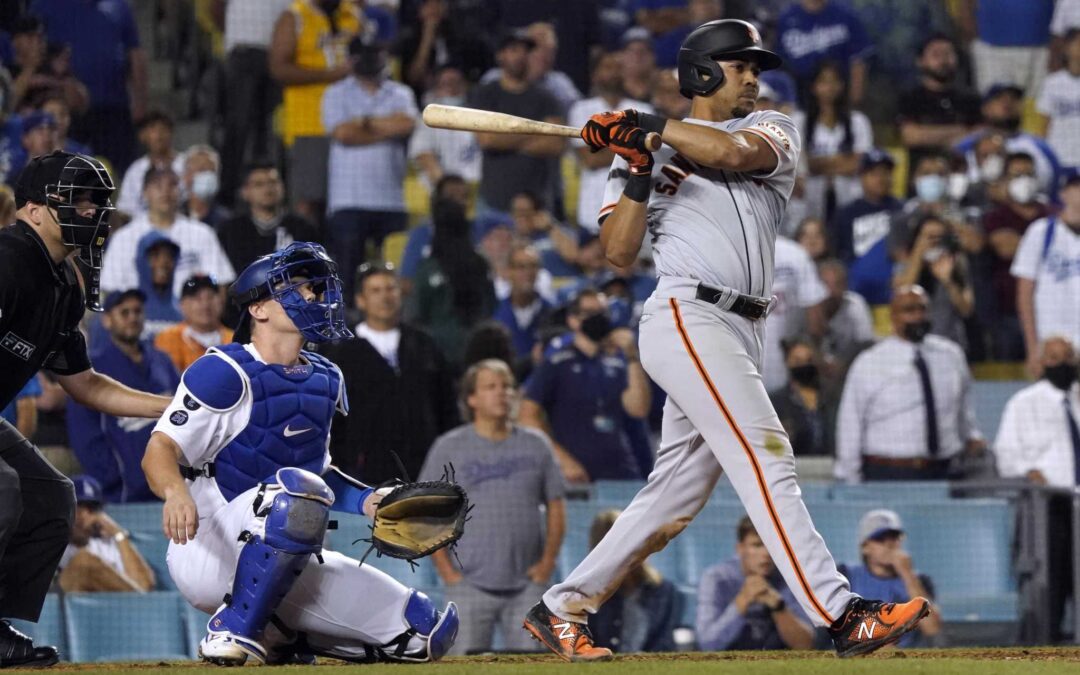 The Giants are magic.

First of all, let’s get this out of the way now: He was safe.

Second of all, Ruf may have gone around enough to qualify his swing as strike three but the reality is the ump blew one or two strike calls earlier in the at bat on pitches that were balls. So no whining Dodger fans.

Third of all, the play of the game (that was not made) was the play at second base. Thanks to Jason Vosler’s hustle, his huge lead off first taking advantage of Max (potty mouth) Muncie playing waaaay off first base and thanks to some sloppy, lazy non-chalant play at short by Chris Taylor on Thairo Estrada’s super routine grounder the game was extended. In that situation Chris Taylor has to show some urgency and get some zip on the ball, game over, Dodgers win, Giants in first by one game. Because of that play the game was extended and magic happened thanks in part to the walk to Ruf to tie the game. The next batter, LaMonte Wade Jr. (maybe my favorite Giant at the moment) singled on the first pitch to right to put the Giants ahead 5-3.

On that hit, Dodger right fielder Billy McKinney was the epitome of undecided and his hesitation allowed the liner to bounce about a foot in front of him. It is a play and a situation in which you have to dive and go all out to try and catch the ball to win the game. Anything less is simply a strategically bad outfielding decision. I believe that 9th inning should be taught in perpetuity forthwith to demonstrate both the importance of base running and defense.

This could be a decisive moment in the season when the Giants pull away from the Dodgers as their rivals unravel while their fans boo their closer off the field on consecutive nights.

There is an undeniable element of bad energy in the Dodger world right now and hopefully the Giants can take advantage. For those who lob accusations of Managerial incompetence at Dodger Manager Dave Roberts regarding the decision to pitch Kenley Jansen for a second night in a row after throwing 30 pitches during a blown save on Wednesday… well, I say it is more complicated than that. For starters you have to get your closer back out there as soon as possible. The problem with that thinking is if your closer blows another save….

The bottom line is the Giants have won 3 of 4 in Los Angeles, with the last two in superbly dramatic, downright magical fashion after losing a heart-breaker of their own on Tuesday night.

Is it  me or are LA fans simply scuzzy?

Lost in the mix of the 9th inning magic was Anthony Desclafani’s six inning outing, allowing three runs on six hits. For the season DeSclafani has allowed 18 runs in 18⅓ innings in four starts against the Dodgers. Against all other teams, he has a 1.78 ERA in 16 starts. Jake McGee pitched the ninth to earn his 20th save. He allowed only one hit and had a very good fastball.

Let’s also remember the huuuuge walk to Jason Vosler who was behind the count 1-2. If you want to read a fabulous post-mortem of this game from a Dodger perspective read Bill Plaschke’s story. I say “fabulous” because Mr. Plaschke knows baseball and he correctly points out all the Dodger mistakes made in the 9th lest they blame the umps on the Ruf call.

“The ninth inning Thursday wasn’t an outlier; it was a symbol of everything that has gone wrong for this team (Dodgers), which desperately needs health and the trading deadline to get it right.”
-BIll Plaschke

This are not right in La-La Land right now.

With the win the Giants went 6-4 in the season series against the Bums in Los Angeles. There are six games left to play in San Francisco between the two teams.

The Giants go back home for a nine-game home stand that begins with three against the Pirates. These exciting wins in Hollywood will mean nothing if the Giants let their guard down against Pittsburgh. Tonight it will be Johnny Cueto vs Chad Kuhl. Game time is 6:45 PM Willie Mays Time.