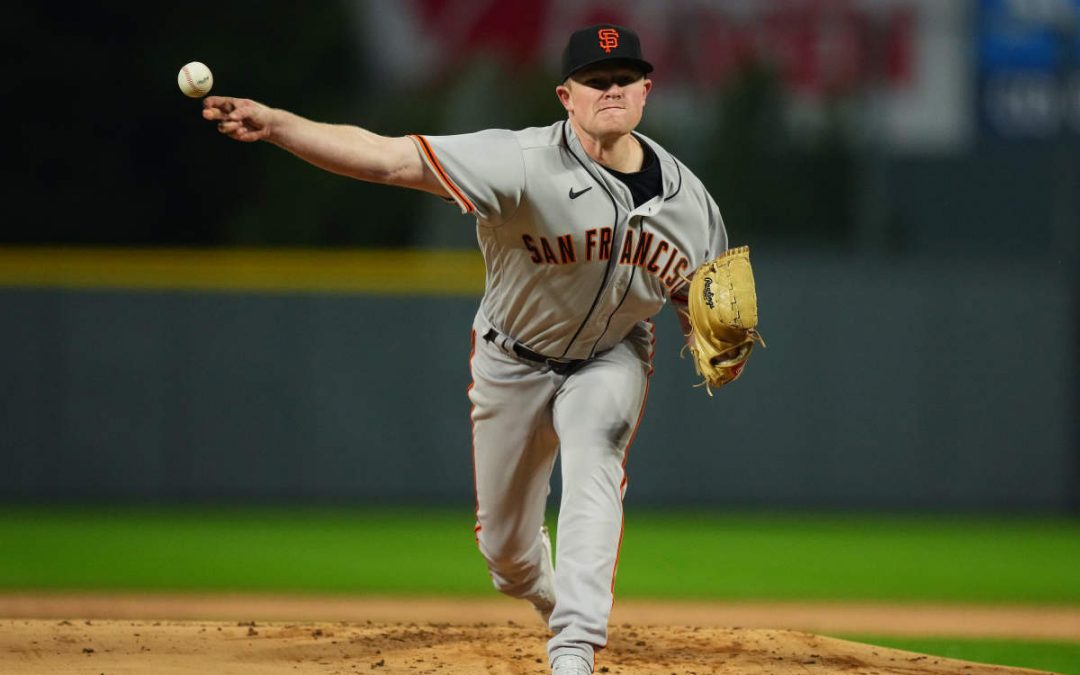 It was Lefty Day at the plate for the Giants last night in their 6-1 win over the Rockies in Denver. Big games by Brandon Crawford, Joc Pederson, Jason Vosler and Luis Gonzalez all contributed to runs while Logan Webb had a no-hitter after 5 1/3 innings.

Crawford, Vosler and Gonzo all went the other way to drive in runs or start rallies. It was great hitting by the lefties on this night.

Logan Webb earned his 14th win of the season in spectacular fashion allowing only one hit and recording six strikeouts against no walks and, oh yeah: zero runs. Webb was pulled after he allowed his first hit of the game with one out in the sixth. Manager Gabe Kapler explained with since the righty has reached the 187 1/3 inning point of the season, the most he has ever pitched before, the Giants are limiting his pitch counts to around 50-60 in his remaining starts. I am ok with the move since the Giants are not going to the postseason and it seems like a smart position with foresight. Logan Webb is on board to:

“I want to pitch 200 innings for the next ten years, not just this year.”

Webb was especially dominant with his mix of fastballs and splitters.

Jason Vosler, recalled from the minors, hit a triple that drove in a run and scored on Luis González’s single in a two-run fourth inning against Germán Márquez. Vosler’s shot was to right center and exposed a giant gap in the Rockies outfield defense.

Hit it where they ain’t pic.twitter.com/GNnHCm3uwJ

Brandon Crawford had an RBI single in the fifth inning. Crawford also made a spectacular play on a hard smash up the middle. He dove to his right and snared the ball then made an accurate throw to first to get the runner.

Wilmer Flores had three hits to go with two from Austin Wynns, LaMonte Wade Jr and Pederson. The Giants were opportunistic on this night from all parts of the line up.

The Giants scored first in the top of the first inning when Wade doubled and David Villar hit an RBI fielder’s choice to score him. Villar’s ball should have been an easy out but the throw from the Rockies shortstop went straight throw Rockies’ first baseman CJ Cron’s glove and broke the webbing, making it an error. One night after being a one-man wrecking crew against the Giants, Cron had a weird night with that error and getting hit by a pitch.

Aaaaand Just Like That the Lewis Brinson Era in San Francisco is over. Mr. Brinson was DFA’d not long after hitting majestic homers in Los Angeles and getting us Giant fans all hot and bothered about a potential center fielder who hits for power from the right side. Yet again, the Giants and Farhan Zaidi try an experiment and then sent a player packing within a few games. It just seems a bit rash and unfair to Mr. Brinson and a bad way to run a Major League Baseball team. I simply do not understand. Why not give the guy at least 100 or 200 plate appearances and see if he is teachable? We have seen this before with many others and to me it makes the Giants look like a Circus act. No Bueno says GG.

Giants Director of Pitching, Brian Bannister, Is An Anti-Vaxxer and has been coaching via video from his home this season. The Giants revealed the news publicly yesterday and Andrew Baggarly wrote a lengthy piece about the bizarre situation. It tuns out Bannister refuses to take the Covid vaccines required by MLB and is the only Giants personnel not on the field for instruction. This is a significant issue for pitching instruction and development. Everybody knows there is only so much you can do from afar. Here is an excerpt from the Baggarly piece in The Athletic:

Bannister chose not to comply with Major League Baseball’s vaccination requirement for coaches and on-field staff, which went into effect beginning with the postseason in 2021. The mandate to be “up to date” on mRNA vaccinations (Pfizer-BioNTech or Moderna) was extended in January to cover minor-league coaches and staff, as well. As a result, Bannister hasn’t traveled to any of the Giants’ minor-league affiliates, hasn’t worked hands-on with any prospects or established big leaguers, hasn’t been able to access any field or clubhouse areas and the organization’s pitching infrastructure has been forced to adjust while their only interface with their top official has been limited to video, text and phone calls.

“It’s been challenging,” Zaidi said. “But because of how valuable he’s been to the organization, we’ve been committed to figuring out a way to keep him involved. The logistical realities of the situation underscore how valuable and important we think he is. It’s just something we’ll have to continue to manage.”

Read those words carefully: Bannister “chose not to comply.” The question remains, should the Giants fire him or give him preferential treatment? They chose the latter and Farhan Zaidi was very careful in his wording. If you read most of the comments below that article you will see that readers are pretty much (99%) in favor of canning Bannister’s ass. This is an interesting ethical and legal conundrum and the Giants would certainly be in their rights to fire Bannister, as other teams have done with staff and coaches who refuse the vaccine for Covid. The irony, here is that Bannister is a big data-driven person in his pitching philosophy and when it comes to his teaching. Evidently he does not feel the same way about scientific numbers and Covid.

The Giants are playing for a sweep in the four-game series today with Brebbia facing Urena at 1:10 PM, Vinny Castilla time.