A web gem is a fine play in the field, as in web of the glove, ball caught by web, etc… A Webb gem is a fine outing by San Francisco Giants pitcher Logan Webb, who was, if you recall, my darkhorse pick at the beginning of the season to be one of the Giants key players this year (pasts self on back again). Last night Mr. Webb pitched a gem of a game going six shutout innings n a three-hit, two-walk performance that included a two-run single on a hit ball that was about four inches from a grand slam. It was a glorious night indeed with the Giants winning 7-0 and pounding a Rockies team that has been decimated by horrendous ownership.

Have yourself a night Logan Webb!

Without a doubt Logan Webb is now officially the Giants most effective, hottest starting pitcher. While aided by double plays in the first and second innings, Logan Webb had explosive pitches going on this night. In fact since returning from a right shoulder strain last month, Logan Webb has gone 5-0 with a 1.53 ERA and 57 strikeouts in 53 innings over his last 10 outings. Only Mets phenom Jacob deGrom (1.35 ERA) has a better mark over that span. A key to Webb’s run of great outings is his sinker, which he is now throwing 33.3% of the time compared to 15% last season.

“Ever since he came off the IL, he’s been an absolute gem on the mound and a bulldog.”

By the way last night was Curt Casali’s eighth shutout of the year! Talk about a backup catcher! Just wow…Raise your hand if thought Mr. Casali would be this glorious when he was signed. 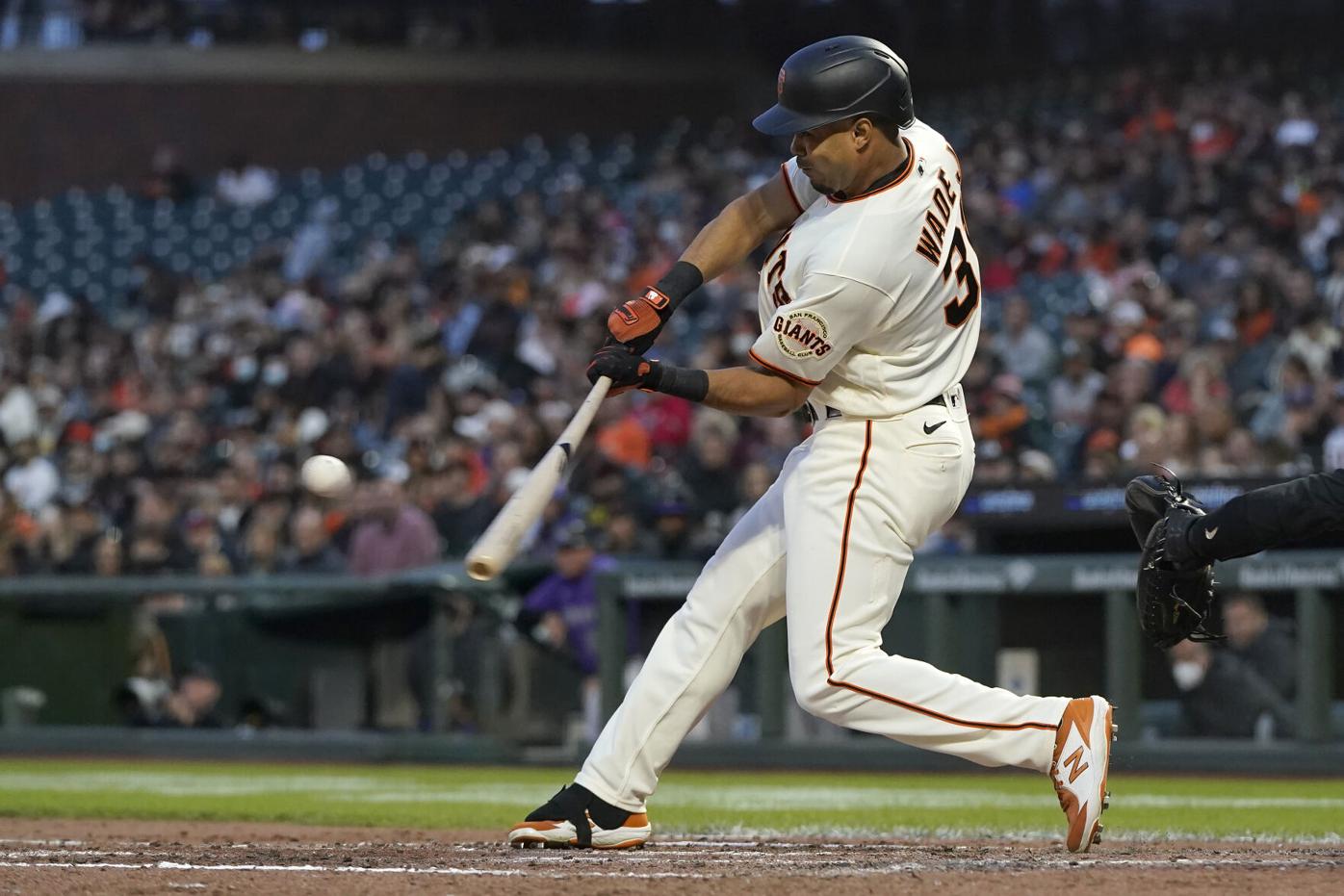 LaMonte (Reggie) Wade Jr. hit a majestic monster of a three-run home run following Webb’s knock to put the game away for the San Franciscans. The magical inning was the sixth and it would be Webb’s last as he was pulled after 91 pitches in a move that was simply designed to give the righty a bit of rest and try out some new bullpen toys in the form of Camilo Doval, who pitched two blazingly beautiful innings in the 8th and 9th, and Jay Jackson who pitched a shutout in the top of the 7th.

Interestingly, no Giant had more than a single hit and the team as a whole only had seven. But they made them count. I would venture to guess our boys lead the world in runs to hit ratio as they have an incredibly efficient offense thanks to the big flies and the remarkable knack for the big hit in a key situation.

In an interesting note, Rockies starter German Marquez entered last night’s game a very hot pitcher with an era under 2 in his last five starts. But on this night, as in other games against the Colorado Ace, the Giants were simply too good.

The most exciting single of the day 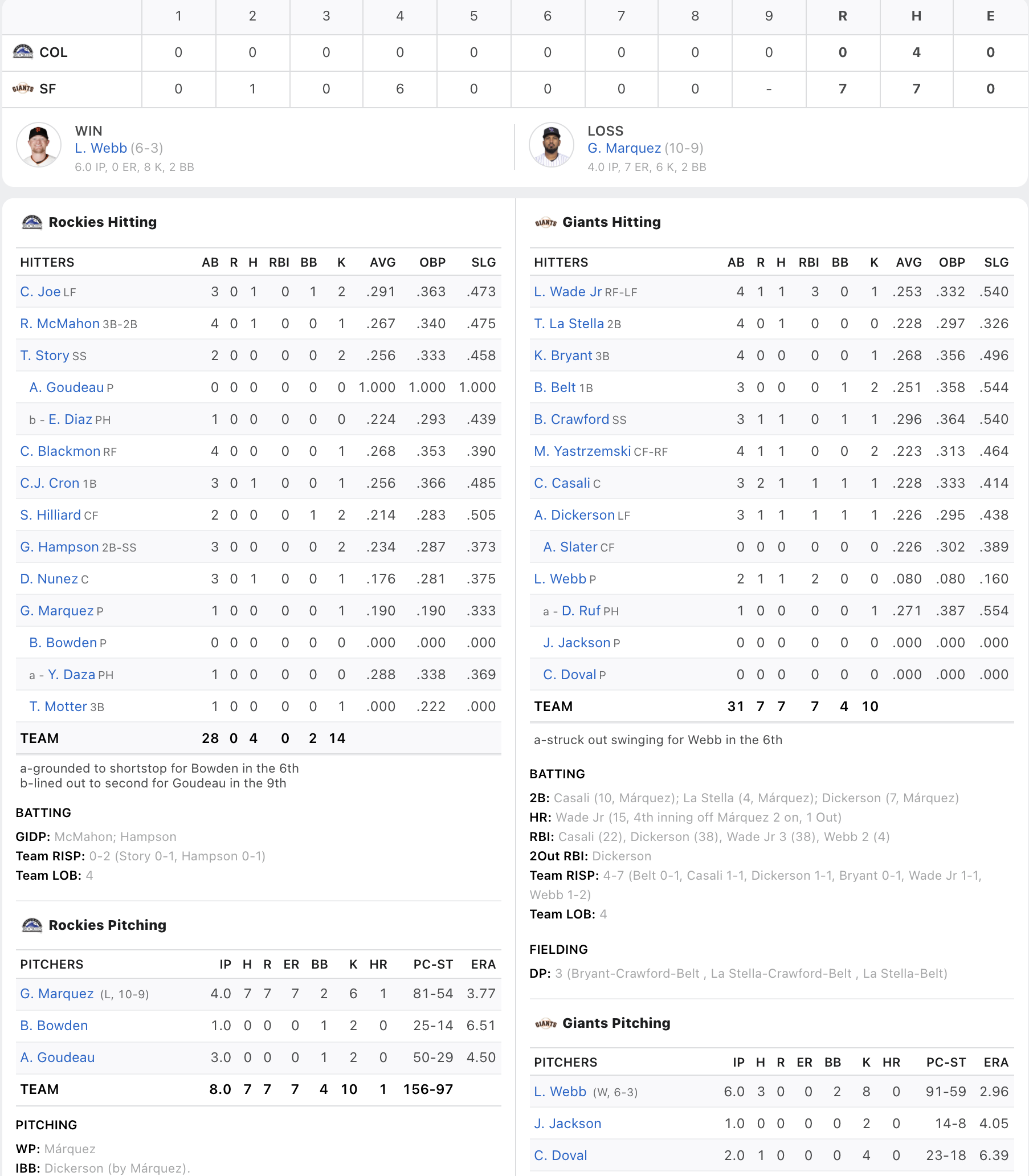 With their fifth straight victory the Giants moved to five games ahead of the SECOND PLACE Bums thanks to the Phillies win over the Los Angelinos.

It will be Austin Gomber against Anthony Desclafani. First pitch is at 6:45 PM, Willie Mays Field time.